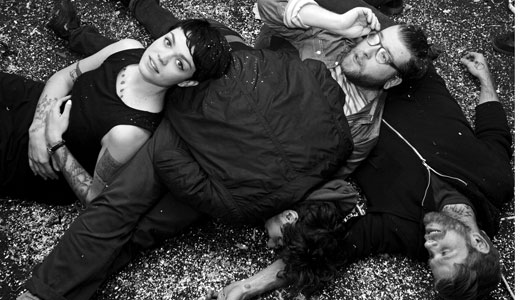 For this month’s “Blues Night,” the meeting of the Kentuckiana Blues Society, the headliner is a man who has played the blues his whole life and learned from his grandfather, R.L. Burnside. Cedric Burnside has made his own name as a top drummer but also plays guitar in the North Mississippi Hill Country blues tradition. In his Project, alongside brother Cody and uncle Garry, plus guitarist Trenton Ayres, Cedric shows off his skills on both guitar and drums, making a modernized, soulful blend of blues and funk that’s ass-shakeable for both younger and older listeners. The influence of R.L.’s playing can be heard in their juke-joint jams (all jamband-fan friendly, though their songs are short and efficient). If the blues have a future, it will sound like this. —Peter Berkowitz

Any chump can turn out a generic dance record now, and many do. The ones who rise above and get proper respect try to push the expected borders of the field, and The Range is earning his keep. Known to his pals back home as James Hinton, the 25-year-old dropped Nonfiction, his first full-length album as The Range, in October on the cheekily named Donkey Pitch label in England. Sourcing sounds from YouTube and initially trained as a drummer, Hinton is most interested in percussive sounds, from pianos to drums and anything else in that, uh, range. He started making his own music while studying physics at Brown in Providence, R.I., with classmates including Nicolas Jaar, first as Stegosaurus, and now with a persona that has little to do with Bruce Hornsby. —Peter Berkowitz

Reuben Soady has something to prove, a big ole deer-sized chip on his shoulder. At 32, poor Reuben is the oldest Soady in the history of the Soadys to never bag a buck, so as the family gathers for opening day of hunting season at their Upper Peninsula camp, he’s determined to make this year different. Written by Jeff Daniels (of “Terms of Endearment” and “Dumb and Dumber”), “Escanaba in da Moonlight” is a hilarious tale with a big heart, as the poor “buckless yooper” is determined to change his entry in the family history books. Daniels says the play “was written to bring people into the theater, any theater, who had never been before. People who’d never seen a play, perhaps, or hadn’t in years.” That’s right, folks: Harry Dunne himself wants you to get off your ass and go get some culture. —Jennifer Harlan

“There’s a moment you know you’re fucked.” Some people may think that moment is when you or a loved one is diagnosed with cancer, but the folks at Kids Acting Against Cancer have never been much for giving up. Since 1999, KAAC has used theater to raise more than $350,000 for Gilda’s Club, Kosair Children’s Hospital and other organizations that help patients take on the “bitch of living” with cancer. This month’s Louisville premiere of the Tony Award-winning musical “Spring Awakening” is no different, a powerful show filled with more catchy music and teenage angst than a “Glee” episode. Following the misadventures of three 19th century German teenagers as they confront issues from sexuality and first loves to suicide, this whole growing up business can be dark stuff, but the show never wavers from its ultimate message of hope. Proceeds go to Kosair’s oncology ward. —Jennifer Harlan

U of L, Belknap Campus

The Kentucky Museum of Art and Craft is currently showing “Eero Saarinen: A Reputation for Innovation” (see Dec. 25 LEO Weekly). As part of the exhibit’s programming, KMAC partnered with U of L’s Hite Art Institute to host a symposium on Saarinen and mid-century architecture. The first speaker is Mina Marefat, the curator of the KMAC show. Next will be Georg Leidenberger, U of L’s Morgan Visiting Professor, who will discuss “Mexican Architecture in the Face of European and American Currents of Modernism.” In the afternoon, Jeanne Halgren Kilde from the University of Minnesota will talk on “Myspace: God, Humanity, and World in Eero Saarinen’s Christian Architecture.” She’s followed by Alastair Gordon, contributing editor of architecture/design at The Wall Street Journal, who will lecture on the “Naked Airport: Aviation and the Modernist Dream.” —Jo Anne Triplett

Veteran drag performer Miss Coco Peru will once again take the stage at the Baron’s Theater in the Whiskey Row Lofts at the annual MAP Louisville party. Miss Coco has been featured in the films “Trick” and “Girls Will be Girls” and has titled her standup show “She’s Got Balls.” Next time you’re on YouTube, watch Coco’s video on her trip to Big Lots and K-Mart to find Celestial Seasonings Tension Tamer Tea. MAP, which stands for Making Acceptance Possible, will donate all proceeds to the Louisville Youth Group. General admission (VIP) is $45 in advance and includes an open bar. A special “Sash” package is $100 and includes a private pre-party with Coco and a chance to win prizes. —Sara Havens

Dr. Martin Luther King Jr. would have turned 85 years old this week. In tribute to his life and legacy, ArtsReach and the Kentucky Center are hosting its fourth annual Keepers of the Dream Community Arts Celebration. Mayor Greg Fischer will be on hand to present his Annual Freedom Award and the Arts Reach Living the Vision Award, but the real treat will be the lineup of community performers from arts programs around the city. They include River City Drum Corp, Bailey Ramirez from 360 Dance Studio, The Music Mentoring Group and ArtsReach. A pre-performance in the lobby will feature a brass quartet, and a reception will be held following the performances. —April Corbin

Some bands are hard to Google but impossible to avoid (Fun.), some require adding a “band” at the end (Man Man), and some bands are especially hard to Google, certainly at work or if one has a girlfriend. Like, for example, Perfect Pussy. It’s a confident name for a confident band, and yes, they are led by a woman (so no worries about any “Cherry Pie”-esque drama there). The exciting punks from the less exciting Syracuse, N.Y., feature veterans of other hardcore and noise bands, and try their best to stampede over singer Meredith Graves with a distorted blowout of a sound best experienced in a small bar or an art gallery. The less sonically abrasive Debauchees offer local support, aesthetic soulmates similarly expected to make a big noise in 2014. —Peter Berkowitz

Washington, D.C., band Priests touches you with a primal cloud of female aggression and melodic rage. Led by Katie Alice Greer, also of Cropped Out festival vets Chain and the Gang, the band’s No Wave riot offers a surf guitar and churchy-organ sound reminiscent of the B-52s and the Dead Kennedys, with lyrics attacking some corrupting facets of modern culture — it’s punk circa 1980 in the best way, and Priests makes it still sound fresh today. A new album is due soon on the Don Giovanni label, so see them close up while you can. Locals Weird Girl also play, adding their own take on post-Manson SoCal vibes, and Anwar Sadat delivers the knockout punch. The all-ages in-store show asks for a few bucks for the out-of-towners. —Peter Berkowitz

When you work someplace for years, you’re bound to have an opinion on your surroundings. That’s the case with the staff at the Paul Paletti Gallery, who see historical and contemporary photographs daily. “Staff Picks” is an exhibition featuring the photographs they want viewers to appreciate as much as they do. The works are from Paletti’s private collection and have not been shown in the gallery. The eclectic mix of photographs travels from the famous, such as Brett Weston, to the anonymous, and from black and white to color. “These dedicated people … have very diverse backgrounds, from photography professionals to people with no art background at all,” says Paletti. “Yet each one has come to possess a unique vision and aesthetic over the years working here …” —Jo Anne Triplett