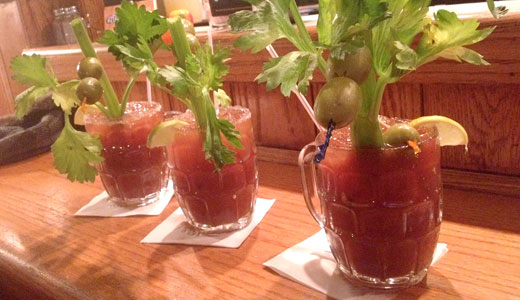 Another fourth Wednesday in the month, another free concert provided by the mighty fine WFPK. They’re a generous bunch — they even provide free music 24/7 on the radio in addition to their concert promotion business. This edition’s headliner is The Wood Brothers, made up of brothers Chris and Oliver Wood. (The band name comes from their love of trees, we think.) Also joined these days by drummer and multi-instrumentalist Jano Rix, who they call their “ace in the hole,” the brothers are several albums deep into a catalog of classic American music. Also classic and on the rise is Small Time Napoleon, the opener who has been getting local fans excited with their hip approach to an old-timey vibe. —Peter Berkowitz

I thought I had come up with a new phrase to describe the Louisville Ballet’s Choreographers’ Showcase: “creative athleticism.” Nope, it turns out the School of the Art Institute of Chicago has a department of creative athleticism! Well, it still fits. The idea of the Studio Series, of which the Choreographers’ Showcase is part, is to let the audience experience an intimate view of the athleticism that’s part of ballet, more than they can get in a large performing art facility. Plus, it gives a chance for the Louisville Ballet members to stretch their legs (yes, I said it). This year’s program offers 12 new pieces created by and for the dancers. Many different styles are included in the showcase, from contemporary to classical, pas de deux to ensemble. —Jo Anne Triplett

It wasn’t such a huge literary stretch for Cormac McCarthy to write about post-apocalyptic life with his classic “The Road.” In contrast, Chang-Rae Lee didn’t seem at all a candidate for the latest esteemed literary author to deliver a novel incorporating future shocks. Yet there are similarities between “On Such a Full Sea” and earlier Lee works that reward both devoted fans and more adventurous readers. A protagonist’s less-than-easy path to fulfilling life and love is again challenged by facing up to the chasms between cultures. “A Gesture Life” didn’t employ roving feral bands in an environmentally devastated America, though — so to be sure, those who come to Lee’s reading/signing at the library should know they’re getting into something very different. The event is free, but tickets are required. —T.E. Lyons

There isn’t a neighborhood in Louisville named Grover’s Corners, but there doesn’t need to be. The fictional setting of playwright Thornton Wilder’s celebrated “Our Town,” Grover’s Corners represents every neighborhood or town in the United States. It’s a place where dreams are realized and sometimes never pan out, where people fall in love, where sorrow is inevitable. Though some details have changed — there are fewer milkmen these days — “Our Town” captures the timelessness of the human condition and the communities we live in. Actors Theatre debuts the award-winning play this week, and special events, including a cast and crew dialogue after the closing night performance, are also scheduled. Check the website for full details. —April Corbin

Music students from Louisville and Poland combine for performances this weekend of the Mozart opera “Don Giovanni.” The production is a reprise of a show staged at the Silesian Opera theater in Bytom, Poland, by the joint cast of U of L Music School singers and their counterparts from the Karol Szymanowski Academy of Music, of Katowice, Poland. The multilingual cast will sing the opera in Italian, with the words on screen in English. The opera tells the story of Don Juan, a fictionalized character of many loves, based on the real-life exploits of an actual person. The two music schools maintain an active student and faculty exchange program and previously combined to stage another Mozart opera, “The Marriage of Figaro.” —Bill Doolittle

I like mine spicy, and if you’re heavy handed with the Worcestershire, then that’s even better. I expect olives, pickles, limes and anything else you want to throw in. And if the rim is salted with Cajun spices, you’ll have me at the first sip. We’re talking bloody marys here, and every bar does them up slightly different. On Saturday, LEO is hosting its first ever Bloody Mary Battle to determine who has the best in the city. More than 15 bars and restaurants are participating, and there will be samples of each, as well as snacks, a free mimosa and live music by DJ Matt Anthony. I can’t think of a better way to spend a Saturday morning than sipping on some bloodys. I better make sure my Friday night is extra special. —Sara Havens

As Kentucky’s General Assembly once again debates legislation to roll back reproductive rights and health care access for women, reproductive justice advocates are gathering to pay tribute to the 41st anniversary of the landmark Roe v. Wade decision, organize for the fight ahead in Frankfort and partake in some of our finest local BBC brews. Proceeds from this event will go to those on the frontlines of the battle to preserve a woman’s right to choose in Kentucky: the ACLU of Kentucky Reproductive Freedom Project, Planned Parenthood of Indiana and Kentucky, Louisville Clinic Escorts, Kentucky Health Justice Network, Kentucky Support Network, and the Kentucky Coalition for Reproductive Choice. Cheers to choice, while Kentucky still has it. —Joe Sonka

Old Louisville’s favorite corner joint and Art+FM’s Club El Rancho local showcase bring together three bands tied to our town. First is The Teeth, long-established players who don’t frequently play shows or put out records, but when they do, the proto-punk appraisers make each angular hook count (dollars, that is). Lovers of the heavier side of the coin will dig Blood Planet’s doom edition of punk. They will also love our neighbors from Lexington, Wretched Worst, who also want to induce fear in the hearts of their audience. Playing such hits as “Dog Shit Deserver,” “Worse Than Jail” and “Fucked in Hell,” the unsettling guitar groans and gritty noise unseal the gateway of the guttural beast, lying in eternal slumber until the band’s next gig. And when it awakens, no pair of ears is safe. —Lara Kinne

Califone is a band Louisville can appreciate, and not just because they carry the post-rock torch. It’s because they are a band that survives through change. Stitches, released last September, is another chapter to that story, and their first effort recorded outside of frontman Tim Rutili’s native Chicago. The album was born in the Southwest, where Rutili gazed into the horizon of dry hills and shopping mall landscapes. Those unfamiliar settings became inherent to his songwriting, and to the core of Stiches that careens around human vulnerability and its place within textural bounds. Now is a chance to hear this gorgeous album and other Califone gems at one of the most sound venues in town. Nashville guitarist William Tyler, formerly of Silver Jews and Lambchop, opens with a solo set. —Lara Kinne

For her first show at Swanson Contemporary Gallery, Linda Erzinger wants the audience to question how we connect with our environment, both socially and metaphysically. To create “Screenplay,” the local artist harvested everyday objects — toys, shoes, computer parts and fabrics — and constructed animal-like portraits and non-traditional mandalas with them. Then, each assemblage was veiled by a television screen, which distorts and magnifies the piece underneath. The result is a collection of pieces that encourages the audience to experiment with different angles of viewing art, as well as explore how they interact with the objects that surround us daily. —April Corbin

PYRO Gallery knows how to throw a party. Two, in fact. In honor of its 10 years in existence, PYRO is showcasing its long roster of artists in two exhibitions in two locations — at its namesake gallery and at the Jewish Community Center’s Patio Gallery. Twenty-two current members plus 18 former members are showing in the “Still on Fire!” exhibition. The cooperative art gallery was established in 2003 in a former firehouse at 221 Hancock St. The founding members were Scott Borden, Erin Devine, Mitch Eckert, Susan Moffett, C.J. Pressma and Marilyn Whitesell (Borden, Moffett and Pressma are still members). The gallery moved to 224 W. Main St. in 2008, then back to the area now known as NuLu at its current location in 2012. —Jo Anne Triplett

Apparently the walls of PYRO Gallery started groaning when they tried to stuff all the art by past and present members into it, so they had to head over to the Patio Gallery at the Jewish Community Center with the surplus. The result is two exhibitions featuring work by former and current members celebrating PYRO Gallery’s 10th anniversary, with the companion show at Patio Gallery showing works by artists currently involved with PYRO. “While other cooperative galleries have existed in Louisville, many have not survived, and PYRO still seems to be going strong — still on fire,” says Bette Levy, artistic co-director of PYRO and director of the Patio Gallery. “The current members represent a broad mix of ages, styles and media, and this exhibition reflects that exciting diversity.” —Jo Anne Triplett