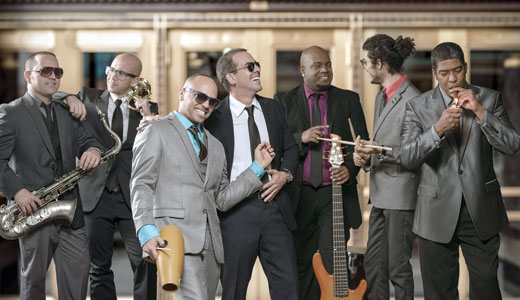 In 1994, Green Day brought its snotty pop-punk to the mainstream with “Longview,” an anthem of boredom-fueled masturbation. And now Green Day has inspired a Broadway musical, which is to say that something doesn’t add up. Ah well, the band’s wildly successful album American Idiot provides the soundtrack here, and according to press materials, the musical “tells the story of three lifelong friends, forced to choose between their dreams and the safety of suburbia,” a quest that “leads them on the most exhilarating theatrical journey of the season.” So, is the metaphorical suicide and ultimate alienation left out of this version? Regardless, the musical has gotten excellent reviews by the likes of The New York Times, and it will be here for only two days. You know you want to. —Kevin Gibson

With the Kentucky General Assembly in full swing, Sen. Gerald Neal has introduced a Senate bill to repeal the death penalty and make life without parole the maximum sentence allowed. The House should see a similar bill introduced in February. As such, the debate on the death penalty in the commonwealth may heat up in the next few months. This makes it the ideal time for a primer on the issue. This week, U of L’s theater department performs “Dead Man Walking,” which remains one of the most thought-provoking productions about the sensitive subject. The semi-fictional play, which was adapted by actor Tim Robbins from the 1993 best-selling nonfiction book of the same name, follows a nun who becomes a spiritual advisor to an undeniably guilty rapist and murderer. —April Corbin

“Tiempo Libre” literally means “free time,” but the band might translate better as “put on your dancing shoes.” Native Cubans, now Miamians, they primarily play timba, “a fusion of the traditional with rock, jazz and Afro-Cuban elements,” says Jorge Gómez, pianist and musical director. “We also play Latin jazz and something that is a little different, songs which fuse classical and Cuban music.” They’ve received Grammy nominations, and most recently released Bach in Havana and My Secret Radio. Gomez describes the album as “the stories of our lives, and music is the way we live our life. Even though we play sophisticated rhythms and music, I call our concerts ‘Cuban music parties,’ because we want everyone to leave their cares behind, be present in the moment and share in a beautiful music experience together.” —Martin Z. Kasdan Jr.

This production of the classic “Jane Eyre” — adapted by Christina Calvit from the Charlotte Brontë novel — tracks the life of a young governess looking to find stability and love while rising from an unforgiving childhood. First published in 1847, the novel fused poetry with fiction, which revolutionized the art of short stories. Performed by the members of Walden Theatre and directed by Alec Volz, “Jane Eyre” is part of the company’s Cornerstone Classic series, which has included “Great Expectations,” “Julius Caesar” and To Kill a Mockingbird.” Walden hopes that by tackling these classics, the students will be equipped with a more solid theater foundation. And, for a theater-lover, it’s always nice to revisit the classics. —Chloe Gaines-Hall

It’s always a treat to rub elbows with fellow Louisvillians at 21c. Throw in a reason to party — a fundraiser for Kentucky Shakespeare — an open bar, hors d’oeuvres, desserts, live music, and sonnets and love scenes performed by Kentucky Shakespeare actors, and you’ve got yourself a decadent night out on the town. All proceeds raised at “Shakespeare in Love — An Evening of Rhyme and Roses” will go to Kentucky Shakespeare, which is the oldest free Shakespeare festival in the country. The $100 admission gets you everything listed above — did you catch the open bar part? — and if you bring a date, the cost for two drops to $175. “The funds raised at this event will help support our expanded summer season of free Shakespeare and Kentucky Shakespeare’s touring education programs,” says Matt Wallace, producing artistic director. —Sara Havens

Remember indie rock band Enon? Longtime fans will be thrilled to find former members John Schmersal (also ex-Braniac, now also playing with Girls Against Boys) and Rick Lee (also ex-Skeleton Key) performing with their new band, Crooks on Tape. Coming a half-decade after the end of Enon, Crooks on Tape recently dropped their debut record, Fingerprint, on the Misra label based in their former hometown of Dayton, Ohio. Forming in Los Angeles in 2010, Schmersal and Lee picked up drummer Joey Galvan to form their new psych/pop-angled band. They say, “Fingerprint is for Crooks a pop record — the band at its most accessible. Stranger things are to follow.” This group is half art project and half band, coming together to improvise and create a new image. —Chloe Gaines-Hall

It’s always good to have friends. Jen Anderson and Lauren Ade are photographers who were introduced by a mutual friend nearly nine years ago. That meeting eventually led them to form their own company, AdeAndersonPhotography, in Louisville. Now other friends at Rooibee Red Tea have stepped up to sponsor the opening of their new exhibition, “Through the Lens.” “‘We shoot what we see’ is sort of our motto,” say Anderson and Ade. “What others interpret is what we love hearing after folks have been to or seen one of our art shows … We strive to be different in a world of technology that is ever changing and challenging us to shoot better and be more creative.” The opening reception is Saturday, Feb. 1, from 6-9 p.m. —Jo Anne Triplett

U of L (Comstock Concert Hall)

Jazz bassist Rufus Reid returns for a presentation of his forthcoming album, Quiet Pride. Inspired by Elizabeth Catlett’s sculpture, Reid’s suite moves from overtly jazz motifs through passages that deftly blend voice and instruments. He’s the featured artist in U of L’s 18th annual African-American Music Heritage Institute, whose 2014 theme is “Jazz Meets the Symphony.” Professor Jerry Tolson, director and a co-founder of the Institute, says, “Reid’s compositions draw from both worlds, resulting in a unique approach and reflection of the limitless possibilities of the contributions of African-Americans to all genres of music. We look forward to this concert that will feature Reid’s original compositions that meld these two significant genres of music.” —Martin Z. Kasdan Jr.

Shilpa Ray makes music that exists in a strange pocket universe. Ray plays a harmonium, an Indian drone instrument. She has a raspy but very lovely voice, like a young, pre-’80s Grace Slick. Her band combines punk and blues in a nice, subtle way. So it makes sense that she’s currently on Nick Cave’s record label, as she is certainly in like company. Ray is bringing her band — featuring Louisville expatriate and Lucky Pineapple alum William Benton plying his incredible bass talents — to Louisville for two performances. The first is an in-store set at Modern Cult Records at 4 p.m. The second set is at Zanzabar and features both the amazingly pop antics of Julie of the Wolves and the delightful indie of New Mother Nature. —Syd Bishop

‘In the Woods’ by Sara L. Turner

Sara L. Turner, founder of Lexington’s Cricket Press, returns to Louisville with an all-new art show titled “In the Woods.” Building off of the theme of her last show, “Tiny Ghost Stories” (which was also held at Revelry), Turner presents a new gallery of hanging sculptures and screen prints. Her shows allow the public a peek into both her imagination and creative process. A portion of the proceeds from the show will be donated to the Kentucky Natural Lands Trust, an organization devoted to restoring, protecting and connecting with the wildlands of Kentucky, especially in the Pine Mountain region. Learn more about their conservation efforts at KNLT.org. —Chloe Gaines-Hall