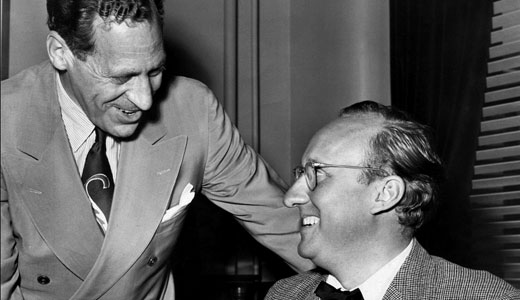 “Music Makes A City” — a PBS program that airs Friday night at 10 p.m. on KET Channel 15 — chronicles the birth of the Louisville Orchestra and an ensuing magical period at mid-20th century when the symphony commissioned, performed and recorded new music by an array of the greatest composers of the day, including Paul Hindemith, Roy Harris, Gian Francesco Malipiero and Heitor Villa-Lobos. It’s a story long enough ago — roughly 1938-1970 — that few of today’s Louisville Orchestra patrons actually experienced it, but it’s recent enough to be held as a Golden-age tale in the collective memories of the symphony’s fans.

The program is a television adaptation of a film of the same title directed by Owsley Brown III and Jerome Hiler. “Music Makes A City” debuted in Louisville in 2010 and was screened in theaters and national film festivals. But Brown says he and Hiler were also interested in delivering the story to a wider audience through television. Their recut version will be aired by 86 PBS stations.

“The story gets at a period of Louisville cultural life that did not happen by accident,” says Brown. “It’s a nod toward the unsung heroes of 20th-century culture — people who really stuck their necks out.”

In the film, we find that one who sticks his neck way out is Louisville Mayor Charles Farnsley — a visionary leader whose stuck-out neck seemed always adorned with a Kentucky Colonel-style string tie. In the narration delivered by Louisville native Will Oldham, who performs as Bonnie “Prince” Billy, Farnsley is cast as a lovable maverick who loved high culture and a grand plan.

“Farnsley combined a baffling series of traits,” Oldham explains. “He was both a populist and a highbrow. A serious philosopher and a brassy showman. He changed the city’s seal to the fleur de lis, which not only conjured images of old world culture in Kentucky, but echoed a certain royal identity — which may have appealed to His Honor, personally.”

Louisville businessman Dann C. Byck is credited with formulating the plan for a Louisville Orchestra, and when Farnsley later became mayor, he bought into the idea wholeheartedly. Dwight Anderson, dean of the University of Louisville School of Music, went to Chicago to find a young music director and came back with Robert Whitney, who could make the music that they all hoped would make the city.

“There was no seating, you just sat,” recalls Krebs. “The timid ones hung back and the bold ones took the first chairs. Mr. Whitney was very young. He was 32 when he started the orchestra. He said we’d all learn together.”

And they did. After those beginning years, Farnsley, Whitney, Byck, New York Herald-Tribune critic Virgil Thompson — and whoever else it took — won a $400,000 Rockefeller Foundation grant for the Louisville Orchestra to commission and record current composers. The LP records were cut by Mercury Records, and then Columbia, for the orchestra’s own First Edition label. The commissions paid $500, plus another $500 if the composers came to Louisville to conduct, which many did. The effort attracted so much attention that smack in the middle of the Cold War, five Russian composers, including Dmitri Shostakovich, included a Louisville stop on their American tours.

“I was young, and I was scared to death of making a fool of myself as a reviewer of music I knew nothing about,” says Mootz. “I knew every note of the Beethoven sonatas, but certainly didn’t know any of the notes of a concerto by Elliott Carter.”

And there were some odd notes. Dissonant chords and wild clutters of rhythm.

“I was at many rehearsals and saw how hard the players worked and how dedicated they were,” says Mootz. “How they improved from week to week in reading the new scores.”

A highlight of the era came when famed New York dancer Martha Graham premiered “Legend of Judith,” with a score by William Schuman, in Louisville. The ballet proved such a triumph that the Louisville Orchestra was invited to debut the work with Graham at Carnegie Hall.

The film nicely melds archival photography with interviews with those who were there — including many of the composers. But what lifts it from documentary to art is a soundtrack derived by Hiler from the orchestra’s own recordings.

Near the beginning, music casts a foreboding backdrop to the 1937 flood in Louisville, with raindrops ever-falling on the swollen Ohio River. Later, the Ohio is placid and gray on a foggy day. Elliott Carter’s “Variations for Orchestra” is set to pictures of wind-blown seaside grasses. Carter, who died in 2012 at the age of 103, is wonderful talking about conducting his piece with the Louisville Orchestra in 1955.

Friday, the Louisville Orchestra will follow an 8 p.m. concert in Whitney Hall with a special 10 p.m. PBS party. The orchestra, directed by guest conductor Julian Kuerti, performs Mendelssohn’s “Italian” Symphony No. 4, and Schubert’s “Unfinished” symphony, with mezzo soprano Susan Platts singing Elgar’s “Sea Pictures.” Then TVs will be turned on for all on hand to view the telecast of “Music Make a City.”