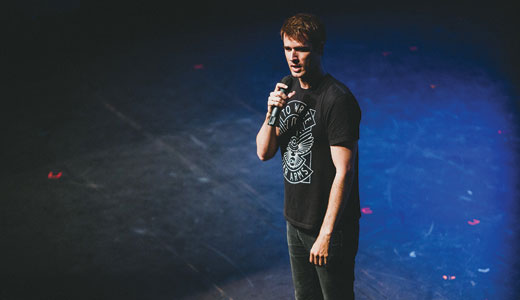 It all started with a girl. Her name was Renee. It was 2006. She was a cocaine addict, depressed, a cutter who’d carved the words “fuck up” into her arm with a razor. Jamie Tworkowski and friends took her in, kept her company during the five days she needed to detox before she could get into a local treatment center. He wrote a blog post titled “To Write Love on Her Arms” about those five sorrow- and hope-filled days. He posted it on MySpace, where it blew up. T-shirts were made to raise money for her treatment.

From there, it just kept growing.

Since then, To Write Love on Her Arms has become an official nonprofit that encourages people struggling with depression, addiction, self-injury and suicide to seek professional treatment. It’s raised more than a million dollars for treatment and recovery centers across the country and answered more than 160,000 emails. Its sleek merchandise could be, and sometimes is, mistaken for an emo band. A staple at youth-filled music festivals like Warped Tours and college campuses, TWLOHA has become a community of its own, a place for the struggling and those struggling to understand the pain others are going through.

A seemingly laidback surfer dude who worked as a sales rep for Hurley before committing his life to TWLOHA, Tworkowski might seem like an unlikely candidate to lead such a movement. He’s the first to admit he never imagined this would be his career or life, but he’s happy it’s worked out that way. “I wasn’t great at sales. They might have gotten rid of me by now,” he jokes, before adding more seriously, “I am so lucky I get to bring my heart to work every day.”

LEO caught up with Tworkowski via phone to talk about his upcoming stop at the University of Louisville (Feb. 4).

LEO: What do you think your male perspective brings to TWLOHA? People often see depression and talking about your emotions as female things.
Jamie Tworkowski: Stigma suggests that these are issues that more often affect females, or more often affect young people. What’s important to us is pushing back on that. These issues affect male and female, young and old, people who listen to all different kinds of music and lead different lives. We can all relate to these issues of pain. It’s definitely true we hear more from girls, but we try to do everything we can to say, “Hey, these issues affect guys and men. I’m a male, but I struggle with depression.”

LEO: It’s easier to say those things than to actually act on them. You’ve learned that firsthand, right?
JT: Yes. It’s hard to take that first step (toward counseling). It was easier for me to encourage other people. It was tougher to take that first step, make that appointment. It was a scary thing to decide I needed to, but what I found was that what started out as a scary phone call and decision quickly became something I was thankful for, something that brought healing and progress.

LEO: Your organization connects people with resources like hotlines and crisis centers. Yet, the sad truth is mental health resources are severely lacking in this country.
JT: I don’t pretend to be an expert on the supply and demand side of things. What we’ve come to believe is that most people who need help don’t get it not because they can’t find it but because they never take that first step. What our focus is on is just inviting people to be honest, and inviting people to take a step in the direction, to sit with a counselor for the first time. Of course, we’d be in favor of more resources, government and insurance making it easier, treating it like any other illness or condition, but an equal problem is the stigma. Most people don’t even ask for help.

LEO: Bullying has gotten a lot of mainstream conversation. That’s obviously one factor in young people’s depression. Do you feel like, as a society, we’re making good progress on being able to intelligently talk about these tough subjects?
JT: I think we’re certainly hearing more and more about these issues. Certainly, you’re hearing more about bullying. Bullying is an interesting one because it’s been around forever. In our parents’ day, it stopped when we got home. Now the bullying can be worse because of things like the Internet. It doesn’t end. The challenge has evolved. It’s probably more challenging now to be a young person. I’m glad people are talking about it, but it’s also heartbreaking. It’s sad it’s taken multiple suicides for people to start talking about it.

LEO: Speaking of the Internet, the social media landscape has changed so much since you founded TWLOHA. How have you taken advantage of that? Has that brought any challenges?
JT: I definitely think we’ve seen the best of social media and the Internet. In my mind — Tumblr, Instagram, Twitter — those are platforms we have access to. Really, the interesting thing is what we place on those platforms. Social media allows us, anyone, to connect with other people. You hear a lot about the ugly stuff — about bullying and ignorance. While those things exist, we’ve been able to see people encourage each other and give hope. We’ve seen some great stuff. It’s become something we’re really thankful for.

LEO: What challenges still exist in making it so depression, self-injury and addiction are no longer taboo subjects?
JT: I think it starts upstream from all these issues specifically. The reality is most people don’t know how to be vulnerable. They don’t know that it’s OK to talk about pain and the places where we get stuck. It starts with honest conversations and honest relationships. It’s one thing to be popular and have a lot of Facebook friends. It’s something else entirely to be known and to let people know not just the stuff we’re proud of but what we wish was different. So much of the conversation hinges on honesty. What does it take to live a life of honesty? That’s how you push back on stigma.

LEO: Music seems to be a critical part when it comes to TWLOHA outreach. Has that been a conscious choice?
JT: Music shows up in the original story. It was important to Renee, a source of encouragement and strength. Some of the first people to support To Write Love on Her Arms and wear the shirts were friends in bands. Anberlin and Switchfoot — those were friends of mine before this. So, it has been rooted in friendship. It wasn’t really a conscious choice. But to look further, we do believe music has the ability to be honest, to make it OK to ask questions. It’s a common ground. It welcomes people into the conversation. On a simple level, we think it’s powerful.

TO WRITE LOVE
ON HER ARMS