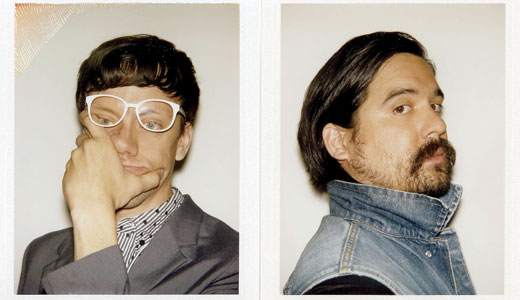 Man Man ended 2013 with CNN’s Anderson Cooper mangling their name. It was the perfect capper for a band that has spent a decade baffling both fans and critics, a band led by a man named Ryan Kattner, who also calls himself Honus Honus.

The CNN shout-out, following up on a story Cooper reported in September, was for the band’s song “End Boss,” which imagines Cooper’s colleague Wolf Blitzer as a “vodka-swilling baby eater.” “He’s very sweet — I love that man,” Kattner says about Cooper. “I’d love to meet him someday. And if he could grace me with a kiss, I’d be so happy … That whole experience was ridiculous. I don’t know, out of the millions of people watching, if that even registers as anything, but it’s still fucking amazing.”

The song is on Man Man’s most recent album, On Oni Pond, arguably their most accessible and mature album to date. But accessible is relative here; the band still sounds like a swirling circus, though their chaos has coalesced into something relatively easier to digest.

Kattner, now 35, calls diehard fans of their early material “those pony-tail guys clinging to me writing the kind of songs I wrote when I was 22.”

“I can’t keep writing the songs I wrote 10 years ago,” says the singer/keyboardist. “I’d rather swallow a bullet than do that.”

Kattner says he didn’t intend to write any songs for the pop charts this time, but recognizes that one song, “Head First (Hold On To Your Heart),” could be a hit, if presented more straightforwardly. The right woman, he says, could sing that song pretty well.

“I’m proud of the song,” he adds. “I’m happy that it’s been able to have some legs. It’s pretty surreal for us that that song has been able to get on Modern (rock) radio. That’s as surreal as the CNN stuff, to have the song on rotation with Korn and stuff.”

He acknowledges that “we didn’t make things easy for ourselves” by naming the band Man Man, “or even, in the case of this single, by calling it ‘Head On’ instead of ‘Hold On To Your Heart’ — I don’t know what I was thinking.”

The band has flirted with mainstream success before, with their songs popping up in commercials and on TV shows, but find themselves now in a more difficult phase of their career — doing some of their best work, but no longer being the hot new thing. It’s a dilemma others have faced before, like the Flaming Lips in the mid-’90s, and Man Man’s most popular days may be coming soon. That is, if Kattner and drummer cohort Chris Powell (aka Pow Pow) can keep the band together.

Asked how many members have passed through Man Man, Kattner sighs and laughs simultaneously. “Eh, it doesn’t matter … All that matters is that Chris and I are sticking around.”

Kattner summarizes their plan as: “Hopefully, we can keep percolating up through the cracks of the mainstream.”

This time around, the band has, like a wolf, acquired some new, younger blood that has kept its leaders alert. “These are their after-school activities,” Kattner jokes. “It counts toward college credit.”

Kattner’s mostly joking advice to younger musicians who want to start a band? Maybe go to business school instead. “Don’t start a band ’cause you want to have a livelihood, ’cause there isn’t one. Maybe there is for, like, 1 percent of people that do it, but it’s no way to live,” he says.

But you’ve made it this far, I argue. “Have I?” he laughs. “I think (I have) just out of sheer determination and maniacal fortitude. It’s also borderline delusional. I think that’s why I’ve made it this far. If you’re willing to sacrifice relationships, creature comforts, stability, the prospect of ending up on the street someday — if these are all things that you can turn a blind eye to past your 20s, then you’re good to go. But, you know, do it while you’re young.”