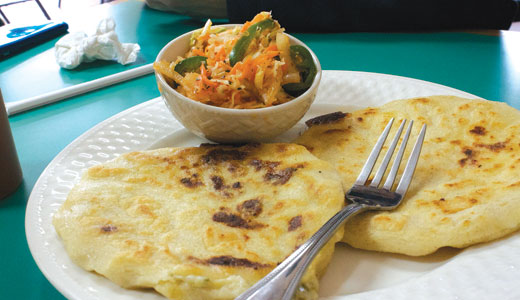 When you think “International dining,” Louisville’s South End probably isn’t the first place that comes to mind. Sure, you’ve ventured to Vietnam Kitchen before a concert at Iroquois Amphitheater, but there are actually a wide variety of international delights available. Here are just a few of the many worth a drive.

Around the corner from Churchill Downs, tucked away in a small concrete building, is La Popular. Initially, you might think it’s just a market, but there’s a small restaurant near the back. The market has a variety of Latin American treats, including cookies, chips and candies. It also includes a meat and dairy section.

We stopped in just before noon, ordering their breakfast plate and baleadas, a popular Honduran dish similar to soft tacos, except they are larger and the flour tortilla is thicker. La Popular’s tortillas were chewy and slightly crisp, stuffed with beans, meat, eggs, healthy hunks of avocado and crumbled white cheese. I don’t know what they do to the meat here, but it’s so delicious and savory that it’s hard to stop eating. Each bite ignites more salivation, and before you know it, you’re thinking about licking the plate clean.

The breakfast platter was a simple dish of rice, refried black beans, a dollop of lime mayonnaise, eggs and a quarter of a perfect avocado. It’s served with a foil packet of four warm tortillas.

We were the first ones in the restaurant; by the time we paid our bill, every seat was full. It’s clearly a neighborhood favorite, so get there early. For bonus points, come with a few Spanish phrases to better communicate with the kind and attentive staff.

You may think you know Mexican, but El Molcajete will teach you that true Mexican food is much more than just burritos and quesadillas. Fortunately, this is a largely delicious lesson. In addition, their menu is enormous and has plenty of the usual fare for your picky eaters. But for the adventurous, El Molcajete provides a wonderland of tasty options.

Upon sitting, customers are served chips and warm salsa. Yes, warm salsa, and it is awesome. Each table also has a container of tangy house-made pickles to whet your appetite. We ordered the Vuelve ala Vida, a seafood cocktail of shrimp, oyster and octopus served in a giant bowl of a tomato-based sauce and topped with hunks of avocado. We also sampled chicharron (pork rinds), pastor (marinated pork), buche (stomach) and cesos (brain) tacos.

It’s sad that stomach is not a regular part of the American diet — it was especially tender and delicious. Brain and pork rinds were predictably fatty and decadent.

Right across the street from El Mocajete in the Banaadir Mall is Bella’s Café, a counter-service café that makes fresh sambusas and mandazi from scratch for a whopping dollar apiece. Sambusas are triangular pastries stuffed with spiced meat filling. Mandazi are large, fluffy balloons of fried dough similar to beignets, except they are made with coconut milk and come plain. I recommend pairing them with milk tea, which is tea blended with milk and sugar and then steamed. There was actually a larger menu of tempting Somali treats on the wall, but they are unavailable until the owner returns to Louisville in about a month. I’m excited to go back and try the nafaqo, a fried egg-stuffed potato.

You have to try the papusas at El Salvadoreno! Papusas are traditionally from El Salvador and are normally filled with cheese, meat or refried beans and served with a light tomato sauce and fermented cabbage. At this place, they also have a papusa with loroco, an edible flower that tastes a lot like broccoli. It’s definitely a match made in heaven.

Across the parking lot from the popular Vietnam Kitchen in Iroquois Manor sits Little Jerusalem Café. Owned and operated seven days a week by Palestinian Sami Barghouti, the menu is vast and full of familiar Middle Eastern favorites. Our server recommended gyros and hummus. The hummus came swirled on a plate and topped with a generous drizzle of earthy olive oil.

I especially enjoyed the gyro. The meat still had a highly seasoned flavor but came in chunks, as opposed to the shaved variety that you may more frequently come by. Don’t pass up the baklava. Our server recommends asking for the outside pieces so you have the extra crunchy bits from the sugar caramelizing on the pan.