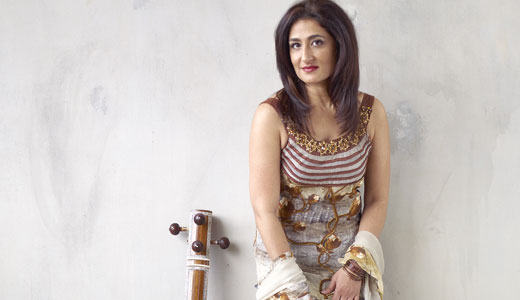 Kiran Ahluwalia’s life probably could not have played out this way if she had lived in an earlier generation. Born in India, raised in Toronto and now residing in New York City, she has spent much of the past decade adding her passion for West African music to her border-crossing sounds.

Her husband and musical director, guitarist Rez Abbasi, was born in Pakistan and raised in California — but when his family first landed in the U.S., it was Louisville that welcomed them. “He’s a pure American,” says the Canadian, “a totally California surfin’ dude,” but he spent his pre-kindergarten year here.

Ahluwalia has not been here before. “I was surprised by the invitation” to play at the Clifton Center, she says. “‘They’re interested in hearing my music?’ That was very interesting … I thought, ‘How are people going to view me?’ I’m Indian, definitely, but I’m also North American. ‘Are they going to view me as an immigrant?’”

She was unsure, but thanks to Facebook, she heard from a fan asking if she would ever come to Louisville, and then more joined in, proving her music could find an audience even in places off her radar. “None of these people are South Asians,” she adds.

Finding common ground is what she does best. In fact, Ahluwalia and band’s latest album, Aam Zameen: Common Ground, released in 2011, broke new ground, heading away from traditional ghazals and adding her recent influences. The opening song, “Mustt Mustt,” finds the Malian band Tinariwen collaborating with her musicians.

On tour now, her band is playing some songs from that record, and she says they will also play some of her newest compositions, which are still inspired by music from Sahara Desert countries like Mali and Morocco. Those are places she has traveled as well as sources of music she has studied “with quite a passion.”

“I usually call myself ‘Indo-Canadian,’ but I’m adding ‘Indo-Saharan,’” she laughs. Her next album is due in the fall of 2014.

Ahluwalia’s visit to Louisville also includes a stop at Field Elementary, where she is scheduled to perform and chat with students. It’s something she does on a regular basis, speaking with everyone from little ones to college ethnomusicology majors. But “kindergartners ask the most interesting questions,” she notes. “They talk like adults!” Once, a child who “seemed like a 1-foot-tall person” asked her over-6-foot tall husband, “‘Hey, Rez, do you have any CDs out?’ It was so adorable.”

Ahluwalia remembers similar visitors when she was a schoolgirl. “You don’t really know what you’re getting, as a child. You don’t understand what knowledge, what interpretation of the world you’re receiving, when they take you out of class and put you in an assembly, and someone else, apart from your teacher, comes to talk to you about something. But we remember those things, right? You remember everyone who came and talked to you.”

She got her first education in the music of the Sahara 10 years ago in Toronto. She returned home from a tour and soon headed out for a concert, only to be bored by the band playing. Having friends all over town, she decided to sneak in and check out the African tuareg band she had heard something about, who were playing across town. It was Tinariwen.

“It started as a deep love right from the get-go,” says Ahluwalia. As she began work on her fourth album, Wanderlust, she started fusing their influence into her own compositions, “but of course I didn’t think I could work with them. I didn’t even try. Like, ‘don’t dream that high.’”

She was happy with what her own band did with the material, and soon she met Tinariwen’s producer, Justin Adams, while working in Copenhagen. He asked to hear her record, and she sent it with a note, saying she had expanded her knowledge and was consuming other tuareg bands’ sounds, as well. He said, “Well, why don’t you do something with that?”