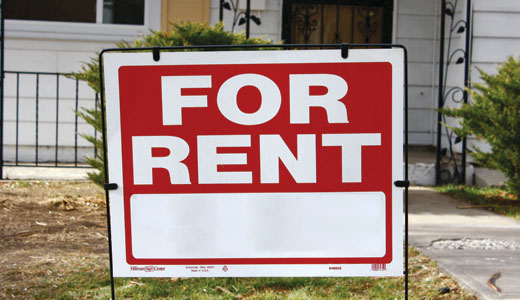 Is the American Dream of owning a home with a white picket fence officially dead?

Not quite. But it is changing.

The State of the Metropolitan Housing Report 2013, released last month, focused on the changing demographics of renters within Louisville and the surrounding area (referred to as the “metropolitan statistical area,” or MSA). Among the findings: 36 percent of Jefferson County lives in residential rental housing, a dramatic one-year increase of 5 percent. This brings the number of renters to the highest point since 2000, when it was 35 percent.

According to the Louisville Apartment Association’s annual market forecast report, which was released in October of last year, the overall occupancy rate of rental units across the MSA is a healthy 96 percent. Meanwhile, homeownership rates have declined nationally for the eighth year in a row.

“Some people consider what happened in 2005 and beyond an anomaly. It’s not,” says Cathy Hinko, executive director of the Metropolitan Housing Coalition, who releases the annual report.

New regulations are being phased in to curb the boom-era lending habits that led to the real estate collapse. Greater numbers of college graduates are saddled with debilitating student loans. Those who walked away from underwater mortgages are dealing with deflated credit scores. Unemployment and underemployment are still high. Mistrust of banks, lenders, economic analysts and anyone who might even be tangentially related to the Great Recession has many second guessing about chaining themselves to a mortgage.

All these factors have created a new era for the housing market, says Hinko, one in which more people are actively choosing to rent instead of buy. A significant portion of rental households — 21 percent — earns an income of $50,000 or more. Some have been turned off by the hidden costs of ownership. Others appreciate the ability to be mobile and chase the most lucrative career. Some are deciding that investing in a small business or safer stock option are more worthwhile investments.

“It’s just a different market, a different housing paradigm,” says Hinko. “We cannot be ruled by past notions.”

The residential real estate market is responding to such trends. The past year has brought faster-than-normal growth among rental properties, says George Chapman of Integra Realty Resources, adding that the MSA has issued 1,900 building permits in the year — twice what would be expected on a normal year.

Most of the new growth, says Chapman, is focused on high-end apartments that demand higher rental prices. After all, people in current luxury apartments want more options in new locales, and people in lower-end units strive to move up.

While all that might be good for business and renters-by-choice, it doesn’t address the affordability issues that continue to plague the Louisville housing market.

Of all the rental units in Jefferson County, 46 percent are considered cost-burdened, meaning renters spend at least 30 percent of their household income on rent. The U.S. Department of Housing and Urban Development says this is the point where individuals and families are unlikely to afford basic necessities like food, transportation and medical care.

If you break that down further, 61 percent of renters living in the downtown districts and neighborhoods west of Ninth Street are considered cost-burdened.

Subsidized housing options are clustered among these neighborhoods, which fair-housing advocates say is a big problem because it furthers social injustice by segregating the city by income level — and inevitably race. (Blacks rent at a disproportionately high rate compared to whites. So do women, especially single women with children under the age of 18.)

It also restricts these individuals’ access to economic hubs where they would be able to find steadier, better-paying jobs. Twenty-one percent of renter households have no access to a vehicle, compared to only 3 percent of owner-occupied households. Furthermore, certain health risks and a shorter life expectancy are associated with living in older or poorly maintained rental housing. This includes higher incidents of asthma, respiratory or pulmonary conditions, cancer, lead poisoning and diabetes. Only 30 percent of all rental-housing units were built after 1980, meaning most were built before mandates were set regarding insulation. Similarly, units built before 1976 may contain lead-based paint.

The LDC review committee approved the subcommittee’s report late last year. Now, the Planning Commission will review changes piece by piece, before eventually getting to Metro Council. The Council has its own committee dedicated to reviewing the LDC.

Hinko knows there will be barriers throughout this process. People are afraid of change, she says. Fair-housing advocates have to assuage fears that such modifications to the LDC would bring more danger to people and property values. They have to focus on the positive rippling effects such changes would have on education and diversity among the community at large.

“We need a unifying viewpoint,” says Hinko. “We need fair-housing assessment through every part. We need to think, ‘What will be the impact of this? Does this feed segregation?’ Zoning is not the free market. It’s a legal bar saying, ‘We don’t want these people living here.’ We need to pore down those bars.”