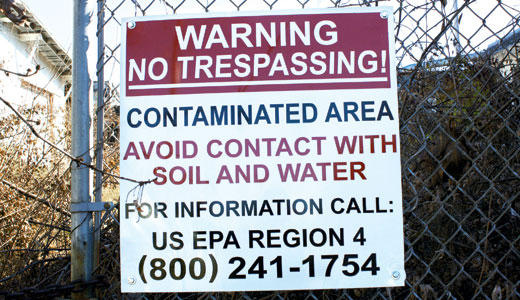 Back in August, a team of researchers from the University of Louisville held a public meeting at the California Community Center to detail their plans to test blood and urine samples from residents living near the former Black Leaf Chemical plant. The contaminated industrial property and backyards of adjacent homes were set to begin remediation for the high levels of pesticides, heavy metals and other chemicals found in the soil. Researchers wanted to explore what residents have long feared: the possibility that toxins were adversely affecting the health of nearby residents.

On that tense Thursday evening, the meeting’s facilitator said the meeting would follow a set structure — questions were to be answered at the end only — but the more than 20 residents in attendance had their own agenda. They began shouting out questions and frustrations almost immediately.

So, are we poisoned or what? Who’s taking responsibility for this?

A solid five months later, at a follow-up meeting held last Saturday morning, that same structured format goes more smoothly. Nobody angrily interrupts meeting facilitator Lauren Heberle of the Center for Environmental Policy and Management or lead researcher Matthew Cave from U of L. People happily help themselves to the complimentary Krispy Kreme donuts. By now, the residents have received the results of their individual health screenings. For almost everyone, the news was reassuring, and that seems to have had a calming effect on the crowd.

This is good news, but it’s nowhere near a complete picture.

Fifty-three adults — 18 men and 35 women — went through the half-day health screening process. All lived within six blocks of Black Leaf, at least two on a property that backed right up to the site. The average length of time the residents had lived in the area was approximately 19 years, which means exposure would have been long-term.

Twenty people (37.7 percent) had gardens in their yard, which had many worried about their produce and whether it had absorbed contaminants in the ground.

Self-reported health histories of the participants showed that more than half suffered from high blood pressure, 28 percent from diabetes, 19 percent from heart disease, and 11 percent from cancer. Though these health issues are likely not caused by arsenic or lead, this doesn’t absolve other chemicals once made or stored at Black Leaf.

Pesticides and PAHs (polycyclic aromatic hydrocarbons), not lead or arsenic, are the “signature chemicals” of the Black Leaf site, which is named for an insecticide company once housed on the property. These dangerous toxins are more difficult for laboratories to test for, which means the tests can be cost prohibitive. Researchers hoped to secure a national grant last year to fund these expensive specialty tests but were unable to.

“I’m worried people might be lulled into a false sense of security,” says Cave. “Those levels (of pesticides and PAHs in the ground) were very high, and we didn’t get to test for those.”

He adds that some previous scientific research has linked pesticides with health issues like the ones identified by the Black Leaf residents.

The research team isn’t giving up. Untested samples, which also include hair from the residents, are currently being kept at a bio-repository where they will wait until additional funding comes through. They would need more than $53,000 — that’s $1,000 per person — in order to test the hair.

If funding permitted, researchers would also like to make their medical screenings available for children. Residents in attendance quickly identified that as their biggest concern. Researchers were unable to include them in this first round because the review process for academic research involving minors is far more extensive and would have delayed the collection process until after the remediation had begun.

At the meeting in August, residents voiced similar concerns about children being excluded from the study. There was some talk of screenings being available through the health department, and a list of interested parents was compiled, but nothing seems to have materialized.

Even if funding is collected, the unfortunate truth is that residents may never be able to link Black Leaf to residents’ health issues. Though Councilman David James (D-6) and researchers were happy with the 53 participants, for research purposes the sample is small. Plus, health issues are influenced by such a wide variety of environmental and biological variables; it can be difficult to conclude anything.

“From a scientific standpoint, we’ll likely never know about a link,” concedes Cave, “but I’d like to try.”

Ten of those properties were handled by the EPA because of the high lead and PAH levels. The process involved removing 1,670 tons of soil at a cost of more than $425,000. This leg of the process was completed in October.

The rest of the properties are being addressed by KDEP, which expects to finish by the end of the month. This leg of remediation involves disposing of more than 6,300 tons of soil. The cost: $1.5 million.

As for the property itself, KDEP is in the process of reviewing plans on how to move forward with the cleanup process. No concrete timeline has been announced.