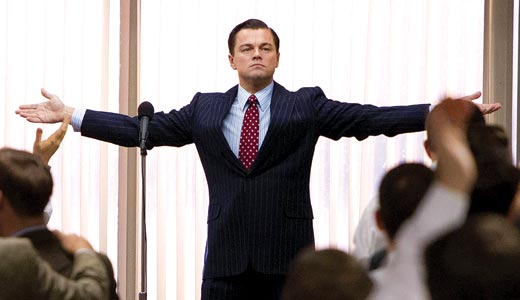 The Wolf of Wall Street

Director Park Chan-wook (“Oldboy”) made his English-language debut with “Stoker,” a beautifully shot, unsettling gothic coming-of-age tale. It could be his best work yet. Strong colors drip from every inch of the screen, and the strange family dynamic feels both melodramatically gorgeous and frighteningly inappropriate.

Shane Carruth’s low-budget sci-fi “Primer” has grown in reverence since its 2004 release, and he finally followed up on its promise with “Upstream Color.” “Upstream Color” owes a great deal to the influence of Terrence Malick; transcendence and beauty wash over the entire film. The plot’s sci-fi elements are simply a MacGuffin for the events of the film that unfold like a breezy afternoon dream, with hints of nightmare giving way to moving passages of confusion and empathy.

Danish director Nicolas Winding Refn’s “Only God Forgives” is a dark and, at times, comically blunt descent into a hellish circle of revenge and retribution. The film pulses with Refn’s trademark reds, in neon and blood, with stylized violence and incredibly brutal imagery. It succeeds based on the power of its imagery more than the coherence of its plot or script. The film’s dedication to Alejandro Jodorowsky is fitting, and its utter unwillingness to succumb to macho payoffs ensured it would disappoint the guy who dressed up as The Driver from “Drive,” Refn’s previous film, at last year’s Halloween party.

“Blue Jasmine” is a great Woody Allen film, certainly among his best. The film is entirely hinged on the wonderful Cate Blanchett and her portrayal of Jasmine, an awful socialite whose life has crumbled around her, yet can’t drop her artifice long enough to find any hint of humility or sincerity in herself. It’s a tragic comedy that ends in a truly dark place.

“Frances Ha” director Noah Baumbach’s films have generally skewed toward tales of ennui and dissatisfaction of the bourgeois, with varying results. Yet despite an often-frustrating main character, “Frances Ha” is elevated by a sincere love for its heroine and excellence on both sides of the lens, particularly with co-writer and star Greta Gerwig. The beautiful black-and-white photography and title cards owe a debt to Woody Allen and the French New Wave, while its standout sequence of Frances clumsily running through the streets of New York to David Bowie’s “Modern Love” is all its own.

It says a lot about the current American mindset that the scathing indictment of greed and unchecked capitalism portrayed as satire in “The Wolf of Wall Street” has been so widely misunderstood. This hilarious, energetic black comedy by cinematic genius Martin Scorsese portrays a magnetic lead character (Leonardo DiCaprio, in his best work yet), whose actions and lifestyle are so despicable that reactions range from scoffing laugher to gasps of disgust. It’s a film about addiction and ego, money and power, the American dream as sold to and stolen from Americans. It’s also one of the best drug comedies ever. It’s exciting to see Scorsese unleash a film with this much enthusiasm and fervor.

Of course, the average moviegoer wants a moral at the end of the story, especially for a film released on Christmas Day. They want to see the results of the lives ruined by this true story. The film doesn’t need to show this because it’s all around us. The wolves spend a few years in minimum-security prisons and emerge with book deals and speaking engagements. The sheep end up with foreclosed homes, no unemployment benefits and no healthcare.

I was most moved this year by Steve McQueen’s “12 Years a Slave,” the most painful, unflinching and gut-wrenching depiction of American slavery I have seen on film. It features incredible performances by Chiwetel Ejiofor, Michael Fassbender (his third collaboration with McQueen) and Lupita Nyong’o, with each actor inhabiting his or her role completely. The director’s eye is impeccable, and his history as an artist is evident in every scene. Few directors have the ability to say so much with the framing of a shot or how long the camera stares at its subject. “12 Years a Slave” brutally shows the dehumanizing of slaves — the torture, the fear and the shame in these atrocities that occurred in our not-so-distant past.

(As of this writing, I have not seen “Inside Llewyn Davis,” “Her” or “The Act of Killing,” all of which I imagine will end up joining this list of my favorite films of 2013.)