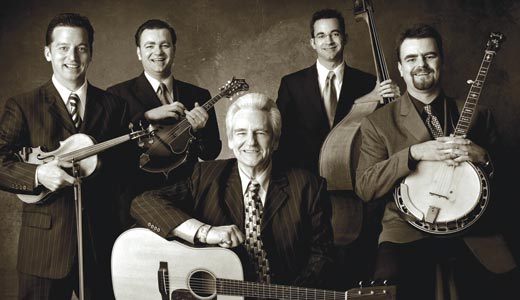 Ronnie McCoury makes a good point. While Kentucky is rightly famous for giving birth to bluegrass music, a convincing argument can be made that in the late 1950s and early ’60s, the neighboring cities of Baltimore and Washington, D.C., were in reality the capitals of the banjo, mandolin and high lonesome sound.

“That whole area was probably the Mecca for bluegrass musicians,” says McCoury, the acclaimed mandolin player in the Del McCoury Band. “A lot of Southern people went up there to work, and Baltimore-Washington, D.C., had a ton of bluegrass musicians. There were more working there than anywhere in the country.”

Ronnie ticks off a lengthy list of artists including the Stanley Brothers, Hazel Dickens, the Osborne Brothers and, of course, his father Del, who got his start playing with the late guitarist Jack Cooke before joining Bill Monroe’s Blue Grass Boys for a spell.

Since then, Del McCoury — both as a solo artist and with his eponymous band, consisting of his sons Ronnie and Rob on mandolin and banjo, as well as bassist Alan Bartram and fiddler Jason Carter — has accumulated a staggering 31 International Bluegrass Music Association awards, one Grammy for the band’s 2005 album The Company We Keep, and collaborations with the likes of Steve Earle, Dierks Bentley and the Preservation Hall Jazz Band.

On the Del McCoury Band’s latest album, The Streets of Baltimore, the bandleader returned in spirit to the city where he cut his musical teeth. Released in September to widespread critical acclaim, the record recently received a Grammy nomination for Best Bluegrass Album.

“My dad was really driving this,” says Ronnie. “He was the captain. (He) put this record together. He picked all the songs out. And I really think that this means a lot to the guys (in the band), how important it was to my dad to get this record done.”

The Streets of Baltimore hearkens back to an earlier time in roots music, one in which there was significant crossover between bluegrass and mainstream country, with songs originally recorded by Bobby Bare (the title track), Brenda Lee (“Too Many Rivers”), Jerry Lee Lewis (“Once More with Feeling”) and Ray Stevens (“Misty”) being given the bluegrass treatment by the McCoury boys.

The album also marks the continuation of a reflective period for the band, one that began in 2009 with the release of Celebrating 50 Years of Del McCoury, a five-disc box set that compiled the highlights of the patriarch’s sterling career in bluegrass. Ronnie talks at length about his memories of being on the road with the elder McCoury, beginning in 1981 when he was 14, and what was probably his father’s proudest moment as a musician, being inducted into the Grand Ole Opry in 2003.

“One time somebody said, ‘There’s only been 80-some members since 1926 when it came on the air. This is the pinnacle,’” Ronnie says. “It’s pretty cool, and knowing that my dad grew up in the ’40s and listened to the station (WSM) as powerful as it was back in the day — that really makes us proud.”

At 74, the elder McCoury is still raring to be on the road, taking his band’s new music and classic tunes to clubs and concert venues across the country. Ronnie chuckles at the memory of his father driving the old bus in the early years, something he doesn’t have to do today. He says he’s especially heartened at the resurgence of roots music among young people.

For Ronnie and his father, that’s just about all you need.