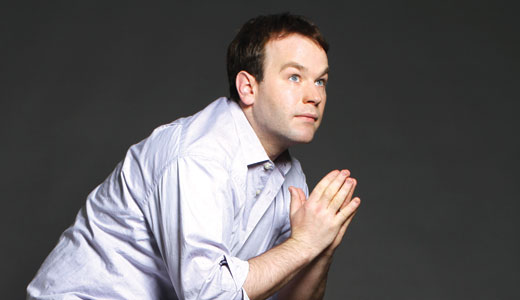 Comedian and storyteller Mike Birbiglia has mastered a fusion of the two forms, turning jokes into stories that become radio, one-man theater, books and movies. His newest stage show finds him going back to his first love, jokes, while still uniting them in a larger story. LEO caught up with him by phone last week.

LEO: You worked over and over to hone (your last show) “My Girlfriend’s Boyfriend.” How have you learned to finesse your show while you’re on stage?
Mike Birbiglia: I edit a lot of stuff based on audience response. That helps. There’s a bar near where I live in Brooklyn, called Union Hall, which is actually where I shot a lot of (the movie) “Sleepwalk With Me.” I do this show called “Working It Out” there every Monday night, and I go and put a ton of writing on stage. Lots of times, I’ll bring notes up with me, and I’ll see what sticks, what does well with the audience. I’ll put them up the next night, cut the things that didn’t work and add new stuff.

I used to work a lot more joke to joke, when I was starting out. When I wrote my (2006) album, Two Drink Mike, it was very much, “Here’s my 50 jokes.” Now it’s, “Here’s my 10 stories.” I’m just trying to figure out how to squeeze the most jokes into those 10 stories. I’ll go on stage and I’ll know what the beginnings and the ends of a story are, but I’ll improvise the middle until I find what’s the best middle of the story.

LEO: So you’re not a comic who keeps trying to make his favorite joke work even when it’s not?
MB: Not really. I do my shows now all over the world — I did the last one in London, Australia, Canada and 70 cities in America — and I really want everything to work everywhere. I want to find the most human version of the joke that I’m writing. And I actually find traveling to be the best thing for that. It’s good to do shows in the South, in the Northeast, in the Pacific Northwest — it helps you understand what’s human about what you’re writing.

LEO: You have a love for the films of Woody Allen and James L. Brooks —
MB: Sure!

LEO: They are more interested in exploring emotions, even if it means losing a joke here and there. Since you’re starting out from that place, and it took Woody a while to get to, how do you think you can continue to grow when you’ve already got the right idea?
MB: Yeah, yeah, I know what you’re saying, yeah. I think the key is to continue to go places that are uncomfortable for you. Like, in my new show, I really try to dive into “Why are jokes uncomfortable?” Why can’t you tell jokes at work? Why can you only tell jokes with your close friends? Which are the types of jokes that are taboo, and why? That’s what’s exciting about the show for me right now.

LEO: And you’re still doing stories?
MB: Yeah, 10 stories, exactly, at this point. But it’s a little less single-narrative than “Girlfriend’s Boyfriend” and “Sleepwalk With Me” were; I wanted to get back to a show that … I was itching to do something that was the funniest bunch of bits I can possibly think of. And what I found while I was creating that, over the last couple of years, was the through line of that had to do with jokes; jokes themselves and mistakes that have to do with jokes. That’s why I called it “Thank God for Jokes.”

LEO: But people shouldn’t assume it’s about religion, correct?
MB: No — at one point I was going to call it “Religion, Sex and Politics,” because those are the three topics you’re not allowed to talk about at parties. And those happened to be the three topics I wanted — all I wanted to talk about at parties (laughs). I dip my toe in religion, I dip my toe in sex and politics, but more than anything, I try to dig into “What is it about humor that alienates us from people?” But then, ultimately, for me, it makes me feel closer to people.