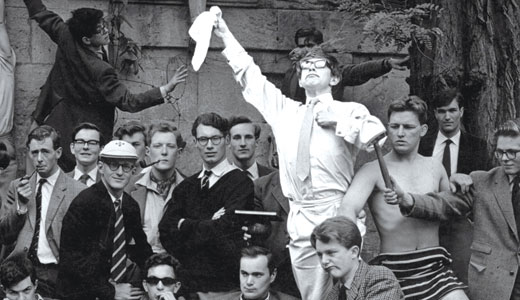 I guess I can’t claim false advertising with a title like that, but this is still disappointing. Stephen Hawking spends under 150 pages glossing over his life, telling little more about his personal life than most Wikipedia entries. One of the more fascinating people of the 20th century doesn’t deem large swaths of his biography as worthy of pages. Short shrift is given to two ex-wives and three kids. (He regrets the marriages’ failures and is proud of his children. Beyond that? Not much.) His research is, if not the clear focus of his life, the sum of what he is willing to impart to curious readers. He spends large chunks of the book retelling his theories and study of black holes, the potential for time travel and other “greatest hits” that readers of his other mainstream books have already furrowed brows over and pretended to understand.

Hawking’s schooling is gone over in slightly more detail than his family, though still surface enough that much of it has montage music playing in the fore. He drank, maybe not to Hitchens levels, but enough to note; was upset at his departmental assignments; and just as he was breaking out, his health began to falter. Throughout much of “My Brief History,” emotions may be mentioned, but they are never felt. Conflicts with colleagues, personal and professional, have no gravitas. They have all the drama of a grocery list. Peers are mentioned by name, but further details are scarce. Low-stakes bets between fellow scientists are about as “fun” and personable as Hawking allows. A photo of one gamble’s prize — a silk-screened T-shirt declaring “Nature abhors a naked singularity” across a pinup girl — is the biggest chuckle (snort?) to be found and the friendliest moment in the book.

Currently the director of research at the Centre for Theoretical Cosmology at Cambridge, Hawking has become a celebrity due to his science (combined with his health, he acknowledges), and he has done so without compromise, though not without occasionally stepping on haughtier toes and courting some controversy among fellow researchers. Hawking glosses over some of these occasions, taking some time to clarify earlier statements and to embrace some evolution of theories and concepts from other books and papers. Perhaps one whose sight is constantly on a cosmic scale just doesn’t bring his microscope to scale of something as small as the interpersonal.

It makes for a frustrating read, wanting to know more, and realizing that Hawking either is unwilling to go there or, more exasperating, that he just didn’t find any of it interesting or lasting enough to discuss. It will be up to those who knew him to fill in the many blanks — likely once he’s gone. There’s more to a man than just the work he’s done. Nine-to-five is but a fraction of one’s day, and when one defines himself solely by that which is accomplished on another’s dime, he denies life itself, and true accomplishment, no matter how brilliant you are at the day job.