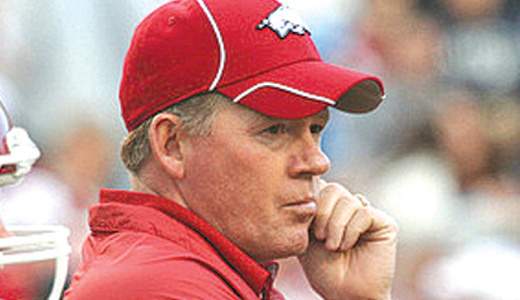 Louisville athletic director Tom Jurich moved so quickly in hiring a new football coach last week to replace Charlie Strong, who split for Texas, that it is almost like he knew Strong would be leaving.

Of course, Jurich is known to keep a vest pocket stock of coaching possibilities ready to reference. Several possible candidates were mentioned, including some rising assistant coaches at major football schools, but the rumor mill had barely begun milling when Jurich tabbed former Louisville coach Bobby Petrino to succeed Strong. In just days, Jurich had Petrino re-signed, re-introduced and sent off to do what Petrino does best: coach football.

The decision wasn’t popular on all fronts. Some fans and media hold it against Petrino that he was always ready to ride away from Louisville, and did. Also, he was fired at Arkansas after a juicy scandal involving a motorcycle, a state cop and a girlfriend who also happened to be a university employee. We’ll probably get in trouble for generalizing on this, but that issue seems to divide pretty much along gender lines: Women don’t like Bobby Petrino for cheating on his wife. Men don’t care.

Hey, we said it was a generalization!

Petrino’s coaching prowess is not in question. He was 41-9 at Louisville, was winning at Arkansas, and won last year at Western Kentucky. He runs a pro-style offense with quarterbacks throwing downfield. Much of his time here, Louisville led, or was near leading, the nation in offense.

Petrino was also 4-0 against Kentucky. One year, Louisville had a big lead on the Wildcats and got the ball down to something like the 2-yard line with seconds remaining. Instead of letting time expire, Louisville called a time out, and on the last play of the game, tacked on another touchdown. Kentucky fans complained Petrino had needlessly run up the score.

The next year, almost the same scenario developed, but this time Petrino had his quarterback run out the clock. Said Petrino: “They got what they wanted — mercy.”

So it is fair to say Bobby Petrino is a bit prickly. But this reporter believes he’s also probably a coaching upgrade from Strong.

On the other hand, Petrino has no reputation for academic achievement by his players. But Strong, in his first head coaching job, lifted Louisville football academics dramatically. Strong insisted players study and graduate. And stay out of trouble. All of which he achieved.

So there’s that for Petrino to consider emulating.

Jurich noted that he wanted an experienced coach for Louisville as it enters the Atlantic Coast Conference next season.

Will Petrino be able to compete with the likes of Miami, Notre Dame, Clemson and national champion Florida State? Maybe sooner than anyone expects.

And then he’ll probably be gone again.

But who cares? Louisville is a very attractive coaching spot, with fans who enjoy the school’s winning tradition. There’s probably a next coach, too, somewhere in that vest pocket.