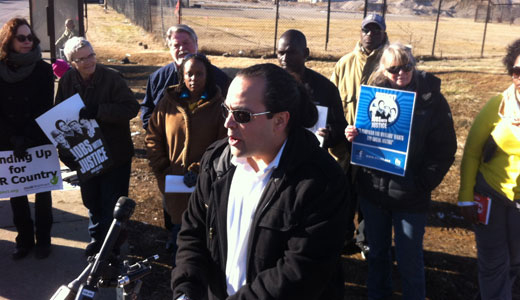 On the blistering cold morning of Martin Luther King Jr. Day last week, 20 activists stood on the corner of 18th and Broadway in Louisville’s West End, asking for government transparency and giving a word of warning about the rumored deal to bring big-box retail giant Walmart to the location.

A Phillip Morris plant employing thousands once stood there, but it closed in 2000 and was razed in 2007, with the city and a developer promising to bring in a mix of retail, offices and housing to replace it. But as WFPL-FM first reported in November, sources say the Fischer administration and developer The Mardrian Group (TMG) are now in secret negotiations to bring a Walmart to the site, including a plan for the city to pay off debt owed to TMG for contract work on the African-American Heritage Center.

Though the Russell neighborhood has an unemployment rate near 16 percent — and is plagued by vacant and abandoned properties such as the old Phillip Morris location — the labor and social justice activists who gathered last week are not welcoming Walmart with open arms as their benevolent new job creator. They argue Walmart is notorious for paying employees below a living wage and unfair labor practices, its impact on the West End will be a net negative for the economy, and say any development deal with the company should include protections for workers.

However, such negotiations are currently hidden from public view, as Mayor Greg Fischer’s office and TMG signed a confidentiality agreement and are withholding any details. The activists, along with Metro Councilwoman Attica Scott, D-1, are calling for the public to have a full and informed debate on the development’s merits.

Last week’s press conference was organized by labor group Kentucky Jobs with Justice, who, along with their national organization, are longtime critics of Walmart’s labor practices. Their executive director, Flaco Aleman, noted that Walmart had been charged a week earlier by the National Labor Relations Board for breaking federal labor law by threatening and punishing workers who have taken part in highly publicized walkouts over the past two years to highlight the company’s low wages. If the city is to agree on a development deal with Walmart in the Russell neighborhood, Aleman wants to make sure three conditions are agreed to.

“The first is that we would want Walmart to pay a living wage to the workers,” said Aleman. “Second, we need Walmart to hire locally, within a 2-3-mile radius of here, or any big-box retailer. And the third is an agreement not to interfere with their workers’ right to organize, if they choose to do so.”

Avery Kolers, a board member of the progressive nonprofit Kentucky Labor Institute, presented the findings of their report on the economic impact of a Walmart in the neighborhood, which showed that the economic costs of the store might well outweigh the benefits. Kolers noted that while the average Walmart employs 281 workers, a recent study on the impact of their store on a Chicago neighborhood showed it actually cost the community 300 jobs from local businesses who couldn’t compete with the low prices of the retail giant.

“Walmart comes in and presents itself as a panacea, but it really isn’t,” said Kolers. “It sucks wealth out of the neighborhood (to Walmart, based in Arkansas). What we need is to build wealth in this neighborhood. (We should) develop small businesses and make sure people have a say in their own future.”

Kolers and local economic development specialist Cassia Herron said the city should be more innovative in its approach to how to develop the property, with suggestions such as a retail hub of small business, farmers markets, a vocational education campus for Jefferson Community & Technical College or University of Louisville, and a primary-care center. Herron added that the renown labor organizer for whom the holiday was bestowed would have had their back.

“I suggest we use this as an opportunity to create a better economic vision for west Louisville, one that Dr. King would be proud of,” said Herron. “Because I would suggest that he might not be so happy about Walmart.”

But Aleman noted that residents have not been able to engage with Mayor Fischer’s office on such possibilities. Fischer’s spokesman Chris Poynter told LEO that negotiations with “a potential retailer” are ongoing, though they still have “several issues to work through,” declining to elaborate on those issues.

“We heard the mayor say just a couple of days ago that he plans and hopes the deal will be signed and sealed by the end of January,” said Aleman. “But what we’ve found from many community folks at this point is that there is no transparency with this administration. (We’re) getting no answers on what’s going on with this project.”

Such frustration is shared by Councilwoman Attica Scott, who believes that Metro Council and residents should be kept in the loop.

“The fact that there’s a black box around the administration’s deal with this site raises concerns for me,” said Scott. “It says to me that there is no accountability, that there’s a cloud around local government, and that’s not how we’re supposed to be… Folks should have a say in what they want to see in this area, and it shouldn’t be decided by people who live outside of West Louisville.”

Walmart is contesting the NLRB charges of violating federal labor law, and pushed back on criticism by claiming the average wage for their 28,000 Kentucky employees is more than $13 an hour. Supporters of a Walmart claim that even a low-paying job is better than no job at all in the economically depressed neighborhood. But Kolers of the Kentucky Labor Institute said such an argument presents a false dichotomy.