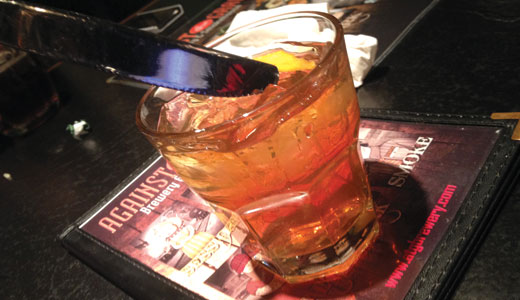 I was doing some research in Indianapolis this past weekend, spying on locals and observing their bar-going habits and trends. (Or, as my friends would tell you: I was making a trip north to visit the girlfriend.) Saturday night I found myself smack dab in the middle of downtown where there was a big Colts Playoff game going on, and we were scrambling to find a place with three chairs to spare. We hopped from bar to bar, frantically searching for minimal space among a sea of blue and white.

Kilroy’s was way too crowded, and so was BW3s (I told you we were desperate). We thought for sure Pearl Street Pizzeria & Pub would have a spot since it was tucked away in an alley, but we misjudged people’s resourcefulness. We left our name at Scotty’s Brewhouse with an hour wait and decided to roam around to see if there was a better spot. That’s when we came upon an unassuming non-crowded bar called 36 East. It said it was a Pub and Grill, so we bit the hook and entered. Since there were only five other people in the place, I figured it was either going to be the best of times or the worst of times. It did have lots of TVs, but unfortunately, it was the latter.

And this brings me to my point. Owning a bar is a privilege. It should be taken seriously. Your bartenders should know how to make basic drinks and pour the correct amount of liquor if you’re going to charge $7 for it. Your bartenders should know the difference between a Bud Light and a Bud Light Platinum, and if I order a Coors Light (because you are out of Miller Lite), they shouldn’t bring me a Bud Light Platinum. And you can’t just call yourself an “Irish Pub” (which they did on the menu) if you have no draught Guinness, Harp, Smithwick’s or any draught beer taps at all, no mentions of Ireland throughout … not even a damn shamrock except for the one on a Sun King poster. The only thing remotely Irish was Bangers & Mash on the menu, but that was followed by Spaghetti and, no kidding, a Ham Burger (two words).

I was kinda hoping I could show this place to Jon Taffer, the “Bar Rescue” dude on Spike TV who I have a crush on. He would have a ball tearing this place apart, not because it would be an easy target but because there’s so much potential lost. The location was the only thing going for it, and sadly, we ended up leaving our cherished seats with a game view as soon as the folks at Scotty’s Brewhouse texted that our table was now available. Do better, 36 East. Just do better. Don’t be something you’re not. Hire a decent staff. Care about your business. We may be drinking, but we notice mediocrity.

Drink of the Week
I’m not sure why it’s surprising to find great cocktails at a beer bar, but every time I do, I’m so taken off guard that I sound like Jacqueline Bisset accepting a Golden Globe. I stutter, pause, search the room for help and say nonsensical phrases like “Scottish background to the front!” — until I settle in and just enjoy the damn thing. This was the case last week when I met some friends at Against the Grain (atgbrewery.com). Since I’m giving the cold shoulder to beer for a bit, I perused through the cocktail menu and was shocked to find a delicious sounding drink made with Woodford Reserve, one of my favorites. I dug the name, too — Dexter Morgan.

Since bourbon was involved, I knew the drink would end better than the TV show did. I was right. Made with Woodford, sweet vermouth, Solerno Blood Orange Liqueur and Angostura Bitters, the cocktail tasted like a manhattan flirting with an orange tree. I was kinda hoping it would be sealed in Saran Wrap and you’d have to plunge your knife-shaped straw in to get to the liquid, but that’s just silly. The price was a reasonable $8, just $1 more than if you would have just ordered a Woodford on the rocks. Killer.

Drunk Texts of the Week
• McDonald’s nuggets are like little bits of sex in my mouth
• I have a feeling you’re getting balls
• She’s been over trusting farts all day
• That’s the last time I give you my anus!