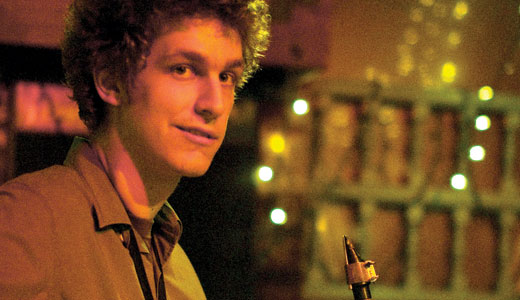 Saxophonist Graeme Gardiner is a Lexington native who graduated from the University of Louisville School of Music’s jazz program, where he was followed by drummer and percussionist Lourenço Vasconcellos. Thus, one might guess their debut recording, Kinetic Meditations, would be full of hard bop and bossa nova. One would be wrong.

This album, recorded before Vasconcellos returned home to Brazil, is full of intriguing improvisations, all recorded live, with Gardiner employing various effects to create the illusion of overdubbing keyboards and even violins.

Both grew up in musical families, with Gardiner’s mother playing organ and piano, and his father playing guitar and singing. Vasconcellos’ father Renato is a jazz pianist who played in Louisville while studying here, his mother played flute and piccolo in the symphony, and his extended family includes many more musicians.

Gardiner cites John Coltrane, Dexter Gordon, Cannonball Adderley and the contemporary Colin Stetson as influences. “But a lot of my inspiration comes from the locals I hear and play with on a regular basis,” he says. “I’ve been playing with Drew Miller in D’Arkestra and other groups now for three or four years, and I’ve always found his playing inspiring. It’s also been a great pleasure to be able to hear Jacob Duncan play so regularly. Wednesday nights at the Nachbar have been like church to myself and others for a long time. To be able to play with these guys has been some of the more musically inspiring moments for me.”

The duo’s work together is an outgrowth of playing in the Baryonyx Trio. Gardiner says, “I had been working on incorporating some of the effects and other toys into our sessions, and it just sort of came out this way. Lourenço is such an intuitive musician that it’s impossible not to have the best time playing with him.”

Vasconcellos replies, “I always wanted to create new stuff and develop a modern concept in music. Even though I studied and still play and enjoy jazz in a more traditional concept, what really makes me happy is to create something new.”