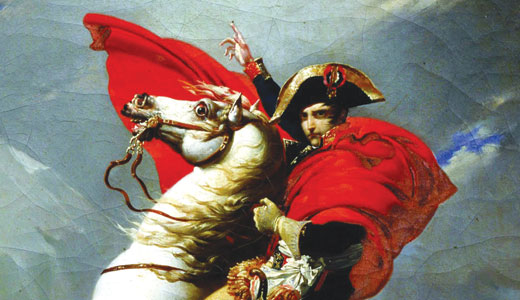 Napoleon Bonaparte was either a savior of the people or a dictator, depending on your interpretation of the French Revolution and its aftermath. But there’s no doubt he was one of history’s best art patrons.

The French Revolution, which began in 1789, claimed the life of Louisville’s namesake, Louis XVI, and his queen, Marie Antoinette. Napoleon’s rise to power was swift, first as a general, then later as the self-crowned emperor of France. He was a busy man, invading other countries and keeping the uneasy peace with his large and powerful army.

Yet he made it a goal to promote French artists and Neoclassical art, leading by example as the primary purchaser. “The Eye of Napoleon” at the Frazier History Museum is displaying more than 200 works from Napoleon’s private collection, such as sculpture, decorative art and paintings, including a few works by Jacques-Louis David.

David, the most important of the Neoclassical artists, had an interesting career trajectory. Even during his time as the court painter for Louis XVI, he was secretly against the monarchy, eventually becoming a pro-democracy leader who signed death warrants. He saw Napoleon as the answer to France’s troubles, coming full circle to paint him as emperor.

The exhibition includes a few works by David, either signed, attributed to or co-painted by him. His “Sketch of Pope Pius VII” is a portrait of one of the highly placed people Napoleon had arrested. David also designed many of the decorative objects used during Napoleon’s reign, including the coat-of-arm plaques on view at the coronation.

“Marie Therese Bourgoin” is a painting of one of Napoleon’s mistresses. David is now considered the artist, although for years it was attributed to Henri Francois Riesener. It is also believed David assisted Jean-Baptiste Mauzaisse with the painting “Bonaparte Crossing the Alps by the Great Saint Bernard Pass.”

Neoclassical sculptor Antonio Canova was another favorite of the monarch. The “Colossal Bust of Napoleon” is a model Canova did in preparation for a larger-than-life freestanding sculpture. Napoleon didn’t like the proposed work but did commission the bust to be reproduced.

As I toured the exhibition with Jessica Cresseveur, a Ph.D. student in humanities at U of L and an expert on David and Neoclassical art, I learned about the bee that is featured on multiple objects. It was a symbol of the French monarchy and Napoleon’s personal emblem, which explains why it’s on his watch (the bee, made of pearls, is on the back).

While the show features works from Napoleon’s private art collection, it should be noted that Napoleon expert Pierre-Jean Chalencon privately owns this collection today. He lent the works to the Exhibits Development Group, resulting in this traveling exhibition that is now on display at the Frazier. It was scheduled to end on Feb. 8 but has been extended to March 2, with the museum having late hours on Saturdays.