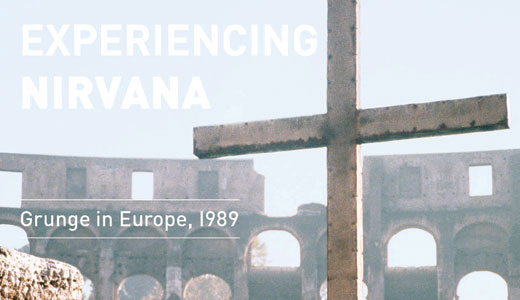 Kurt Cobain was homesick. The Nirvana leader, then 22, was in Europe for the first time, where his band was supporting two other, bigger bands on Nirvana’s label, Sub Pop Records.

Mudhoney was everyone’s favorite, the band expected to break out of the isolated, then-smaller city of Seattle onto the international scene. Tad had been around slightly longer than Nirvana. Their frontman, the 300-pound butcher Tad Doyle, was known as much for his Pacific Northwest lumberjack style — what the rest of the world would come to call “the grunge look” — as his band was known for their music, to the small circle who cared about such things in 1989.

“It was quite an adventure,” recalls Bruce Pavitt, the co-founder of Sub Pop and the author of the recently released book “Experiencing Nirvana: Grunge in Europe, 1989.” At the time of the eight days captured in photos and words in the book, Pavitt was 30 and had already done some traveling. For most of the musicians, twentysomething guys from poor backgrounds, “everything felt exotic,” Pavitt writes.

Along the way, Cobain even quit his own band once. “It was a long way from home and somewhat stressful, having nine people in one van, along with their instruments and merch,” Pavitt says today. “It was a tight fit, and kind of a crazy time.”

The three bands hurtled through Europe over six weeks that fall. The centerpiece of the tour was an early December show in London that doubled as a showcase for the British press, who, pre-Internet, were arguably the most influential music writers of the time. Pavitt and label co-founder Jonathan Poneman flew over for the last week of the Tad/Nirvana leg, hoping to ensure the showcase would go well and help boost their then-struggling company.

The label’s strategy at the time was to sign bands that could deliver live, “because we were basically shut out of many media opportunities,” says Pavitt. “For example, Rolling Stone, or commercial radio. The only way we could connect with people was through touring and live shows.”

It’s the timeless story of a culture in which artists try to connect with an audience in intimate settings, as opposed to crowds who end up herded into stadiums — though, ironically, that’s where Nirvana ended up, Pavitt notes.

Pavitt calls the book a “microhistory.” It does cover a very brief period yet manages to tell a story that could easily make a great movie — there are great characters, fantastic locales and a high-stakes climax. Pavitt’s words concisely and efficiently detail the stories, day-by-day, while photos by the author and Steve Double make the reader feel as though he can smell what’s going on in each image.

“It’s interesting you should mention that,” Pavitt agrees, “because that’s actually been my thinking as well — that the book almost works as a storyboard for a film. I think it’d make an epic road trip (film).”

It’s just an idea, so far, he says. “Maybe I’ll have to do something about that.”