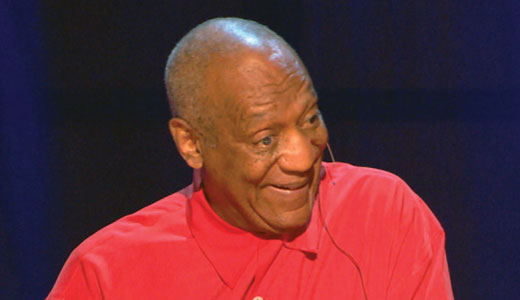 It’s been 30 years since the Cos’ stand-up graced our TVs, but he hasn’t lost one iota of his edge, his warmth or his inimitable eye on human foibles. Filmed live during his 2013 tour, this video contains only about an hour of the proceedings: Comedy Central should have included every word, every gesture, every cackle, regardless of the length. It’s just that good. He’ll be appearing at Evansville, Ind.’s, Aiken Theater on Friday, Dec. 7, but you can win one of three copies of the DVD free courtesy of LEO and Comedy Central! Just hop on over to videotapeworm.com/video.php and click the Free Stuff button, don’tchaknow. Enjoy.

Who is the only entertainer with the maximum allowable five stars on the Hollywood Walk of Fame? We’ll give you a hint: He also wrote “Frosty the Snowman” and “Rudolph the Red-Nosed Reindeer.” Yes, Gene Autry may be America’s most beloved entertainer of all time, and if you’ve never seen his classic singing-cowboy action/adventure TV shows (1950-56), you are missing a real treat. This set contains all 91 half-hour episodes, filmed astride Champion the Wonder Horse, with sidekick Pat Buttram usually nearby, cracking wise and watching his back. Also includes bonus episodes of spin-offs “Annie Oakley,” “Buffalo Bill Jr.,” “The Adventures of Champion” and others. A must-own!

Naomi Watts is best friends with Robin Wright, unaware that Wright is having an affair with Watts’ son (James Frecheville). Meanwhile, Watts’ son is best friends with Wright’s son, Xavier Samuel, who starts an affair with Watts, despite the fact that she’s (1) married to Ben Mendelsohn, and (2) his best friend’s mom. Eww. Bottom line: Two young guys are screwing each other’s beautiful moms on a beach in New South Wales, but since it’s based on a big chick-lit book called “The Grandmothers,” it’s really not sleazy. Much.

We kinda liked the first “Despicable Me,” but we loved the diminutive slapstick “minions” who brainlessly carried out all of Gru’s (Steve Carell) screwy schemes. They are front and center in this sequel, along with Gru’s lovable girls, making this a far more even and entertaining outing as Gru is hilariously “recruited” by a government agency to uncover a new world threat. Oh, and some boy keeps sniffing around Gru’s oldest daughter (Kristen Wiig). Should keep us happy until 2014 when the minions get their own movie.

“Doc Martin,” one of our favorite guilty pleasures, concerns a rather odd physician (duh), played by long-time UK TV funnyman Martin Clunes, ministering to the good people of Port Wenn, Cornwall. The problem is, the good doctor is an ass: A mean-spirited, callous, intolerant, misanthrope who has no one to blame except himself when things go wrong. It helps, of course, that his patients are all friggin’ nuts, too. But his long-suffering girlfriend (Caroline Catz, who marries him at the beginning of this season) believes there is a good man in there somewhere. Wonderful.

DOCTOR WHO 50TH ANNIVERSARY SPECIAL: THE DAY OF THE DOCTOR

Every so often (previously only for PBS Pledge Week), Doctor Who’s BBC gurus would break all their Time Lord rules by creating a story involving several incarnations of The Doctor working together. This one combines Matt Smith and David Tennant, plus a previously unseen Doctor — John Hurt! — along with companions Jenna Coleman and Billie Piper to explain how The Doctor ended the Time War with the Daleks, an act that haunts his every living moment. Oh! And watch for a cameo by the fourth Doctor, our favorite of the series. Great stuff.

This franchise long ago gave up any semblance of reality as the cars got ever faster, the women better looking and the plots ever more fantastic. This one finds Dwayne “The Rock” Johnson gathering Vin Diesel and the late Paul Walker, promising full pardons for all if they can take down criminal mastermind Luke Evans and his sidekick, Michelle Rodriguez. The real stars, of course, are the cars and stunts, though with eye-candy like Jordana Brewster and Gal Gadot, who really cares?! Brainless, yet incredibly entertaining.

Before being brain-humped into madness by Angelina Jolie, Billy Bob Thornton made some excellent movies, especially “Sling Blade.” This is a long-overdue return to form with Robert Duvall, John Hurt, Tippi Hedren, Robert Patrick and Kevin Bacon as members of a pair of grieving families, gathered together in 1969 for the funeral of a long-estranged wife/mother. Not the best movie we ever saw, but with a cast like that, how can you go wrong?

Once you get past the hype of this being Keanu Reeves’ directorial debut, what you have is a solid, if generic, Kung Fu flick that takes the time to explore the spiritual side of the art and the ever-constant need for both power and control in life. Reeves owns the fight club where Tiger Hu Chen fights to raise money to save his temple. Very nicely done.

Late in 10th century China, after generations of war, the remains of a massacred army kidnaps their nemesis, the legendary General Yang Ye. Back at home, his wife and seven sons — each of whom represents a positive human quality: loyalty, piety, humanity, etc. — plan his rescue, knowing they are doomed to fail against the overwhelming force. This is a Chinese movie for fans of the art, featuring a who’s-who of genre actors (Ekin Cheng, Adam Cheng, Ady An as “Princess Chai,” Vic Chow and Fan Xu) coming together for director Ronny Yu’s most extravagant and operatic battle scenes ever.

This, the very definition of the “timely indie drama,” from the writer/director of such great shorts as “Gynecology by Candlelight” and “Count Fagula,” stars no one you ever heard of. Michael C. Freeland (see?!) is as a former American soldier, drummed out and damn unhappy about it, who decides to be the first-ever American born-and-bred suicide bomber. He wisely picks NYC as his target, only to meet big-eyed bartender Rebekah Nelson. Which is better, definitely getting your name in the history books, or maybe finding love?

Faithful readers (support groups standing by) know that we’re kinda Grinchy about Christmas movies; seems they’re either syrupy sweet or simply very long commercials. But this one moves along by the power of song, featuring such greats as Harry Connick Jr., Lyle Lovett and Kris Kristofferson in a somewhat dark tale of a man (Connick) who suffered tragedy as a child and now can no longer enjoy Christmas. His wife, Connie Britton, helps him find a new spirit with help from a sort-of angel — Willie Nelson! We’re just big-ol’ saps at heart. Enjoy.

Those crazy/lucky Finns who created the original Angry Birds smartphone game continue their reign of pig-hating mayhem in this TV series. What more could you possibly want to know? OK: 26 episodes, including a holiday-themed outing, plus a behind-the-scenes look at how animators make the big bucks.

BATTLE OF THE YEAR

If you thought break dancing was dead (as we did), check out this drama in which hip-hopper Laz Alonso and former b-ball coach Josh Holloway do whatever it takes to make America No. 1 once again in this brutal “sport” (that’s what they call it here). Beyond the soundtrack and bone-crunching moves, the best thing about this flick is the guest stars, including Chris Brown and “Arrow”’s nubile pinup girl Caity “Black Canary” Lotz.

On its surface, this collection of four obscure flicks doesn’t look like much, but two of them are lost gems from the earliest days of VHS. The first is “Savage Island,” a mid-’80s white slavery outing set in a South American jungle. Linda “The Exorcist” Blair, age 26, has a crudely spliced-in cameo — and watch for Penn (“and Teller”) Jillette as a security guard! The other, “Chatterbox!,” tells the tender, provocative tale of Candice Rialson, a woman with a talking … vagina. And, yes, it does a monologue. The more depraved reader will recognize Candice as the gorgeous “teen” from the drive-in classic “Candy Stripe Nurses.” Enjoy.

While we’ve never been rabid fans of the Robertson family — their backwoods shenanigans are far too close to our actual childhoods for comfort — you can’t argue with success! Contains the first three seasons of this real-life Clampett-clan who turned a homemade duck call into a million-dollar corporation (thanks in no small part to the only college-educated child of the family, Willie). Too entertaining to be scripted; too dumb to not be real — and this collection comes complete with your own camo bandana. Quack.

A well chosen pair of 1978 flicks for cheap, starting with the groundbreaking “The Initiation of Sarah,” with psychic Kay Lenz releasing “Carrie”-like devastation on Shelley Winters, Morgan Fairchild (as “Jennifer Lawrence”), Morgan Brittany and Robert “Airplane” Hays. Also includes the excellent “When A Stranger Calls”-wannabe babysitter-terror rape-justice film titled “Are You In The House Alone?,” which co-stars a young Dennis Quaid.

If all we told you was that this is a Mandarin-language tale about a carefree young man who spends his days with his friends singing and dancing on the rooftops of Galilee, you might pass on it. But if you did you would miss one of the most entertaining odes to the joy of life ever made. Jay “The Green Hornet” Chou stars as the man, with lovely Hsin Ai Lee as the face on a billboard that rockets him into a frenzied, passionate romance, filled to the brim with music and wild, colorful dance numbers. Simply wonderful; don’t miss it.

After 16 freakin’ seasons, you’d think that creator Matt Groening and staff would be running out of ideas, but you couldn’t prove it with these episodes! Our favorite this season has to be “Midnight RX,” with Homer, Ned and Apu driving to Canada to get Grampa’s medication — but then can’t get home again because the border guards assume that Apu is a terrorist. Mr. Burns swallowing little Maggie whole in the annual “Treehouse of Horrors” is a close second. Just buy it, man.