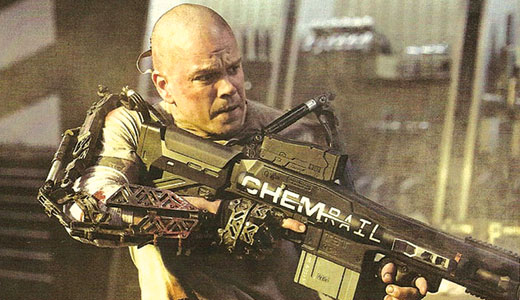 The guys behind “District 9” return with this dystopian sci-fi actioner focusing on the disparity between healthy rich snobs living sumptuous lives in their idyllic space platform high above the Earth, while down below everyone is a poor, sick, wretched slave. And while Matt Damon and Jodie Foster may be listed as stars, the true star is the real-life human misery of everyday people of the Iztapalapa district outside Mexico City where the movie was filmed. A spectacular feat of filmmaking filled with fights, technobabble, horrible bad guys, even more horrible good guys and a potent warning about where our current global plutocracy is taking us. Or are we already there?

Heralded by many as the most power screen drama in decades, we follow Hugh Jackman down a rabbit hole of despair and madness when two young girls — including his daughter — disappear on Thanksgiving Day. And when a suspect emerges (Paul Dano), only to be released, all that stands between him and Jackman’s rage is police detective Jake Gyllenhaal. Other great cast members include Melissa Leo as Dano’s protector, Terrence Howard, Viola Davis, Maria Bello, the weather and the American Suburban Dream. A greater, more gut-wrenching and brutally effective movie has never been made. Our highest recommendation.

What kind of flick combines Steven Seagal, Danny Trejo and Ving Rhames — with new martial-arts superstar Bren Foster along for the ride? Well, it ain’t a poetry reading! A boiling mess of criminal empires, crippled hitmen, armed lowlifes and a seemingly innocent shopkeeper named Jimmy Peanuts (Trejo), plus lots of grunting, spitting and shifty glances. Oh yeah, and violence, lots of violence. The only woman in the credits is “Stripper,” played by “Spring Break Massacre”’s stunning Sarah Minnich. Our kinda flick.

This crime drama starring Timothy Olyphant, set in the coal-mining slums of eastern Kentucky, simply gets better every season. He’s a former lawman, booted out of his job due to excessive force and standing up to crooked politicians, turning him into a one-man army of justice. This season finds him dealing with decades-old fallout from his brutal father’s criminal dealings three decades ago, while a preacher manipulates the criminal syndicates, the law and the ignorant populace into a private war for his own profit. Amazingly good.

Aaron Taylor-Johnson, Chloe Grace Moretz and Christopher Mintz-Plasse return as Kick-Ass, Hit Girl and The Motherfucker- née-Red Mist in this follow-up to 2010’s surprise superhero hit. Kick-Ass and Hit Girl wish only to retire and lose themselves in the fog of high school, but the renamed Red Mist ain’t gonna let that happen. So new gangs of masked heroes and villains are forged, populated largely by guest stars like Jim Carrey (“Colonel Stars and Stripes”), Donald Faison (“Dr. Gravity”) and Lindy Booth (“Night Bitch”). A fun, watchable, if less than magical, reunion, with Moretz still stealing every scene she’s in.

ONE DIRECTION: THIS IS US

If you remember *NSYNC, New Kids on the Block or 98 Degrees, then you’re probably too old to be the target audience for this blast of shiny-faced teen pop from the UK. Frankly, none of them can hold a candle to Bobby Sherman, but what’s important here is that they take the time to walk you, their fan, through their meteoric rise to fame, requiring weeks of gigs in their hometowns, getting their hair cut and being fitted for really cool clothes. And now they are ready for their big concert at London’s O2 Arena, just one stop on a wicked world tour! After which their voices will change and they’ll be asking, “You want fries with that?” But we’re not bitter.

This second outing in the Percy Jackson franchise follows Logan Lerman and the other youthful demigods into the Bermuda Triangle in search of the Golden Fleece. As the PG rating would suggest, this is all light-hearted action with fun, if unimpressive, special effects and very, very loose ties to Greek mythology (which somehow includes a very contemporary zombie army). Bodacious babe Alexandra “Texas Chainsaw 3-D” Daddario co-stars; watch for cameos by Stanley “The Hunger Games” Tucci and Nathan “Firefly” Fillion as the FTD delivery guy.

Robert De Niro and Tommy Lee Jones lead a great goofy-Goomba cast in this dark comedy that reminds us a lot of “RED.” De Niro is a former mob boss who takes his spoiled-rotten family to France to lay low after ratting out the mafia. Jones is at his stoic bemused best as their government handler, who asks only that they try to control their worst impulses and blend in quietly. Ain’t. Gonna. Happen. Michelle Pfeiffer is particularly good as the spoiled princess/wife who just smiles sweetly when homemade bombs go off after someone crosses her. A light and looney love letter from Martin Scorsese and Luc Besson. Enjoy.

Jerry Bruckheimer and Gore Verbinski, the guys who brought us “Pirates of the Caribbean,” take a rejiggered and very comic look at an American icon. In this version, a demented Tonto (Johnny Depp, wearing a dead bird for a hat) believes that greenhorn lawyer Armie Hammer is destined to become an eternal symbol of justice (a horse told him so, along with some weird bunnies) — and if he dies in the process, eh, no biggie — giving Depp license to shove, drop, crush, drown and generally abuse the man for two-and-a-half hours. Way too long and surprisingly violent, it desperately needed a more charismatic villain, à la Geoffrey Rush’s “Barbossa,” but we still kinda liked it.

Casey Affleck escapes from prison and heads across 1970s Texas to find Rooney Mara and the daughter he’s never met in this odd adult dust-drama. Wildly romantic, and told in intimate, non-cinematic terms, it’s more of a character study than the expected shoot-’em-up, with Sheriff Ben Foster doing everything he can to bring things to a quiet resolution. Too rarely seen Keith Carradine is terrific as usual in a supporting roll, and Mara turns in her best performance to date.

As of this writing, this appears to be the final season of “Futurama,” the groundbreaking animated series from Matt “The Simpsons” Groening that has had more fan-demanded resurrections than any show in history. Will it actually go off the air? Very possible: Groening has proved everything he set out to prove and told all the stories he intended. Our favorite of the season has to be the last episode, “Meanwhile,” a screwy time-travel adventure that gives closure — sort of — to Fry and Leela’s eternity-spanning romance. If this is the end of the series, it ended on a perfect note. A must own.

A goofy haunted rom-comedy about a pair of easily frightened roomies who both fall for the same girl … who thinks their house is haunted. A nicely crude found-footage spoof with a wonderfully ethnic cast including Carlos Santos and J.R. Villarreal as the guys and smokin’ Maxim babe Fernanda Romero (“Drag Me To Hell”) as the girl. Fun.

A gritty Canadian-made drama set in Cuba during the Batista years, where political corruption has turned the once-happy island into a playground for organized crime. Drugs, prostitution and gambling rule of the day as one pair of cops — one clean, the other dirty — fight for the soul of a nation in their own way. So far, so good. Then in walks exotic dancer Elisabetta Fanton — Holy Mother of God! — and you just know that it’s all going to hit the fan. A wildly entertaining indie that’s well worth searching for.

INDIANA JONES AND THE RAIDERS OF THE LOST ARK

Yes, this is the original George Lucas/Steven Spielberg blockbuster with Harrison Ford and Karen Allen — now available for the first time on stand-alone Blu-ray! What more could you possibly want to know? OK: All of the other Indy tales have been similarly packaged for your collecting pleasure. Buy ’em, man!

This animated kid’s outing, five episodes from the reborn LPS series seen on the Hub Network (the original dates back to a Hasbro toy line, circa 1995), follows the adventures of high-schooler Blythe Baxter who can understand all the animals in her pet store. Lots of cleverly hidden learning-fun ensues, including a loose “Prince and the Pauper” retelling when a famous movie star mongoose comes to town. Comes complete with collectable trading cards and a toy; makes a perfect stocking stuffer.

For those looking for something truly different: this tale of an earnest if uninspiring guy who takes his girlfriend “on holiday” — a vacation through mundane English “caravan parks” where nothing much ever happens. Then something happens: a nagging mum and a bloody hit-and-run come between them and their legendarily reserved British natures. A dark and oddly detailed sorta comic look at all that things that can keep two people apart. Or something like that.

This “Twilight”-era teen monster drama gets less press than some, but deserves a look if only for all the ways it tries to set itself apart from the pack. This season begins with a new bunch of werewolves coming to town, threatening Scott’s (Tyler Posey) many strained relationships. Personally, we think the real stars are fragile Crystal Reed and freckle-faced charmer Holland Roden, both of whom get more screen time this season. Fun stuff.