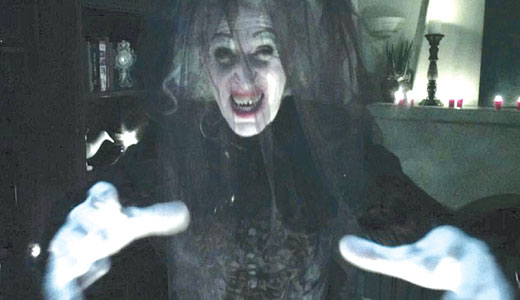 The original “Insidious” was something of a cause celebre among horror fans, having been written and directed by the writer and director of “Saw,” James Wan and Leigh Whannell, respectively. The movie was surprisingly effective, sticking with tried-and-true old-school horror tropes and focusing on the people instead of the spooks. So now the question: If they got the original cast back together, could they do it again? Welllll … Patrick Wilson, Rose Byrne, Lin Shaye, Barbara Hershey and Ty Simpkins all give it their best, but the result feels a bit rushed. Some nice scares, a few somewhat more shocking than the original, but it never pushes its PG-13 limitations. Noisy, spooky fun with a few booga-booga moments to make you squeal.

This perfect Korean actioner stars Jung-woo Ha, who has made a name for himself in such greats as “Nameless Gangster: Rules of the Time” and “The Client.” Here he plays a “ghost” agent stationed in Berlin, doing less-that-noble deeds for his Korean masters. But when an illegal shipment of guns winds up in the wrong hands, he is disavowed by his government — who clearly hope he will be quickly killed, lest he reveal his country’s spy secrets. The bulk of the film is spent with Ha one step ahead of agents from a half-dozen countries, fighting to stay alive long enough to figure out who betrayed him. Similar in style and pace to the Bourne movies, but with lovely Gianna Jun as a far more effective female lead. Recommended.

It’s just not Christmas around the TapeWorm household until we watch our dog-eared copy of this little chestnut. Not to be confused with “The Muppets Christmas Carol,” this was made for TV a couple of years before Jim Henson’s death, featuring every single Muppet, monster, Fraggle, thing, creature and Sesame Street character ever created, all arriving unexpectedly at Fozzie Bear’s mom’s house for Christmas. One hour of non-stop Muppet songs and silliness that could put even the most jaded of Scrooges in a holiday mood. And the best part is the brief cameo by Jim, himself, at the very end; it’s the best Christmas present he could have given. Now sadly out of print and very difficult to find, but worth the effort.

Jean-Marc Barr (“Dogville”) stars as Beat master Jack Kerouac, aka “Jack Duluoz,” during his legendary cloister at Big Sur after the instant worldwide fame of “On the Road” drives him to drink, depression and lots of sex. What a great gig! While costars Stana Katic (TV’s “Castle”), Radha Mitchell, breathtaking Kate Bosworth, Josh Lucas, Henry Thomas and Nora Kirkpatrick hog the spotlight, he goes slowly mad. A nice companion to the recent Kristen Stewart version of “On the Road.”

Frankly, we always assumed this was just another lame “reality” show like “The Real Wives of …,” but we’ve happily discovered that it’s actually an excellent comedy series about a shallow fashion model (bodacious Brooke D’Orsay, seen only in the first seasons) who dies and is resurrected as a chunky lawyer (Brooke Elliott), sent back to Earth to learn the meaning of inner beauty. And how tough it is for fat chicks to find a boyfriend. Co-stars the amazing Margaret Cho, our favorite sex-stooge April Bowlby (Kandi from “Two and a Half Men”) and hot blonde Kate Levering as a hot blonde. Addictive.

If you’re stuck for a cheap last-minute stocking stuffer, here’s the perfect solution given all the interest in Disney’s resurrected “Star Wars” sequels to come. In 1992, a group of rabid George Lucas fans sneak into the Skywalker Ranch to steal a secret script of “Episode I: The Phantom Menace.” The cast, including Dan Fogler, Jay Baruchel and Kristen Bell, are great, but the real treat is watching for all the silly cameos. We spotted Kevin Smith, William Shatner, Carrie Fisher, Jaime King, Seth Rogen, Danny Trejo and Billy Dee Williams, to name a few. Gangs of geeky fun.

THE CLAN OF THE CAVE BEAR

Prehistoric cave-girl Daryl Hannah turned the other cheek in this story of life back when the world was young and men wore mud for hats. Remember the phrase “Clan women kneel!”? It became a short-lived disco pickup line for leisure-suited lizards of the ’80s. Lots of grubby fun, some of it educational yet still very exciting. But why are we mentioning this out-of-print classic at Christmas? Well, we once gave a copy to our ’rents … telling them we had their home movies converted to video! Occasionally pops up at used bookstores.

A pair of young Cuban men, one running from the law, is torn between a deadly escape to America and staying in Havana. If they leave they put their families in danger; if they stay they will most likely die in prison. And it all comes to a head in the “one night” of the title, with the two men and one’s teenage sister crowded into a tiny raft, all alone in the dark surf. A first-rate indie gem by people clearly in love with the story; highly recommended, though the ending may keep you awake at night.

DOCTOR WHO: THE DOCTORS REVISITED 9-11

The final chapter in BBC’s look back at all 11 “Doctors,” this one starting with the “resurrected series” of 2005 starring Christopher Eccleston (who, by the way, was completely unrecognizable as Malekith in “Thor: The Dark World”). Chris was simply phenomenal in the role, but unavailable to stay longer. This led to David Tennant’s tenure, then Matt Smith, who may well be the most popular — certainly the most human — of the entire franchise. With lots of great commentary by the actors, the companions, the writers, etc., plus six terrific full-length episodes. A must-own for any Whovian. Us included.

Even if you have no soul and jazz is not your thing, you will be mesmerized by this biodoc on quintessential trumpeter and professional drug addict Chet Baker. A man of staggering talent whose life was a serious of perfectly calculated mistakes, Baker personified the music he created: distant, intimate, disjointed and angelic, all presented here along with interviews with those whose lives he touched. Recommended.

Aka “Jagten,” this subtitled Swedish juggernaught stars Mads Mikkelsen (LeChiffre from “Casino Royale”) as a divorced kindergarten teacher, surprised by an innocent lie from the 6-year-old daughter of his best friend. But others misinterpret the child’s comments. From there the rumors and accusations take on a life of their own, growing in surprising ways, leading to nightmarish acts by his friends and neighbors. Absolutely stunning in ever sense, but very hard to sit through due to Mikkelsen’s breathtaking performance. Simply put: One of the best damn movies we’ve ever seen. Don’t miss it.

Once a millennia, the warrior-god-race called “Mamodo” pick a new king through hellish magic battles on an insignificant, backward world called Earth — but they can only use their powers with help from a human partner. This is the tale of a Mamoda child, Zatch, discovered by an archeologist, who has no idea the power he possesses. He befriends a 14-year-old boy named Kiyo, and together they must master his powers — and deal with the greater hell of being teenagers — if they are to save the Earth. All but lost due to corporate mismanagement, this represents the most complete dubbed collection available of this groundbreaking anime series.