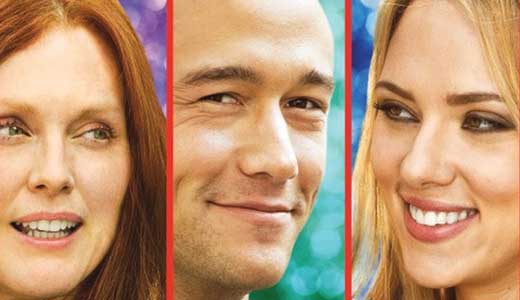 The ads for this flick were very misleading, which led to a number of bad reviews, but if you know going in to expect a strong R-rated film about a porn-addicted cad (Joseph Gordon-Levitt, who also wrote and directed) setting his cold sights on a starry-eyed woman lost in romantic fantasy (Scarlett Johansson), you’ll enjoy the movie more — which is exactly the point! Huh? Let us explain: The audience expects these two attractive, likeable actors to have a fairytale romance, but the script is a treatise on the unhappiness inherent in the unreasonable expectations of our modern, over-stimulated world. Johansson is wonderful, as always, with Julianne Moore, Glenne Headly and, oddly, Tony Danza as JGL’s dad.

The inimitable Michael Caine, a tired old widowed professor living alone with his regrets in Paris, falls head over heels for a winsome blonde dancer, Clémence Poésy (Fleur Delacour from “Harry Potter”). The line starts right here, Mikey! But their friendship leads to the realization that they each need something deeper in their lives, leading to reconciliations and revelations and new beginnings. An oddly comic drama with a blistering cast that includes Gillian Anderson, Justin Kirk from “Modern Family” and Jane Alexander. Recommended.

Arguably just another run-of-the-mill slasher flick, this sets itself apart with deep thoughts, snappy writing and interesting characters. Kelen Coleman plays a young deaf woman who moves to the titular spiritualist community after the death of her sister. But her desire to contact the dead opens a cosmic door for a vengeful ghost, who literally drags her into the web of a sadistic killer called Geppetto because of his habit of torturously stringing his victims up like marionettes! Scream-vet Louise Fletcher adds some class to the proceedings. Alternately feminine, brutal, sweet, gory, nice and nasty.

Hailed by many as the greatest cop show on TV, the series is currently airing its 14th season in GB — and re-releasing this out-of-print 2003 season to video here in the states due to overwhelming demand. How many U.S. shows can make such a claim? Set in the “murder capital of England,” the deceptively peaceful county of Midsomer, the terrific cast is lead by John Nettles as DCI Tom Barnaby, ably assisted by Daniel Casey and Jane Wymark (and watch for Honor “Pussy Galore” Blackman as a Jaguar-driving corpse in the first episode). Oh! And the theme song is played on a theremin! Only slightly more addictive than breathing. (May not be available until Jan. 14 in some areas.)

We love anthologies, and this trio of thriller tales, each from the diseased mind of a different mental patient, makes the best of its opportunities. Malcolm McDowell is the doctor who introduces each story, with John Glover as an artist who comes to believe that his creations are alive, and Lou Diamond Phillips as a professor who builds an elaborate shelter to save his family from the Mayan Apocalypse. The best segment finds David “Touch” Mazouz, haunted by visions of a monster, finding a protector in teacher Lacy Chabert, who suspects child abuse at home. Surprisingly little gore, but a nice old-school sense of palpable dread. We liked it.

“Mad Men” knockout January Jones plays a reformed hooker trying to turn her life around with a new husband in the wilds of New Mexico, circa 1890. That’s where she runs afoul of crazed preacher Jason Isaacs, the most violently over-the-top douchebag ever to pick up a Bible — and only violently over-the-top sheriff Ed Harris can offer the vengeance she demands. A minor hit at the Sundance festival that is guaranteed to disgust Western purists and thrill those of us who enjoy watching a topless, big-hootered babe blowing the shit out of dirtbags with a big, big gun. Violently over-the-top.

WHEN CALLS THE HEART

We don’t usually cover drippy Hallmark Channel movies, but we’re real suckers for Maggie Grace from “Lost” and “Californication.” She doesn’t show up until about halfway through this tale of a young schoolteacher who finds herself unprepared when thrust into 1910 prairie life. That schoolteacher turns out to be Maggie’s niece, inspired by reading of her aunt’s life and loves, which parallel her own, in the old woman’s diary. Yeah, it’s about as fragrant as a chick-flick can get, but Mags lives up to her name and Graces every scene she’s in.

Supernatural teen TV dramas are all the rage these days, largely spawned by the success of the “Twilight” movies. But what sets this one apart can be summed up in one word: “Disney.” It’s the only “supe-opera” on the tube that nervous parents can allow their impressionable bundles of hormones to watch and be assured that it won’t inspire sexual activity, violent outbursts, poor choices and uncontrollable behavior. Nature will inspire all that in good time, but in the interim, everyone gets to enjoy this squeaky-clean tale of a 14-year-old British werewolf, Maddy, who really digs her superpowers but hates all the baggage.

This unrepentant love letter to both cheesy horror flicks and Shakespeare is a hoot. Travis Wester (Harry Spangler from “Supernatural”) plays a first-time moviemaker trying to record his Civil War-set vision of “Hamlet” on a budget. But when his funding goes south, he’s forced to accept help from June “Lost In Space” Lockhart — who demands that he throw in a few zombies! And then dies! The fun is in catching all the bad Bard puns and plots, and spotting screwy guest stars including John Amos, John de Lancie, Jason Mewes, Shelley Long, Hulk Hogan, etc. A no-budget gem.

The guys behind “Reno 911” dreamed up this demonic haunter-comedy, which should tell you all you need to know. But we’re paid by the word, so: Rob Corddry and blonde, preggers, super-hottie wife Leslie Bibb move into a broken down house in spooky New Orleans and immediately discover all manner of weirdness. Like Keegan Michael Key living in their crawl space. Eww. Things get worse — naked old women, paint-thinner cocktails, etc. — until they realize that mommy-to-be is carrying a little bundle of Hell. Enter the exorcists. And the police. If you like “Reno,” you know what to expect.