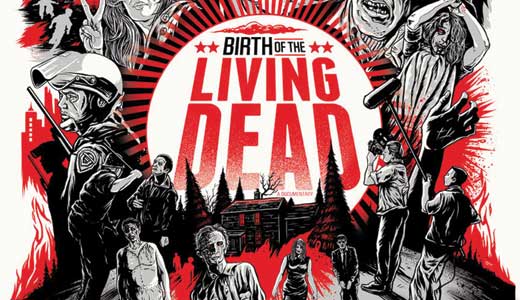 BIRTH OF THE LIVING DEAD

A long, long overdue documentary on George Romero and his wildly influential masterwork, 1968’s “Night of the Living Dead.” Whether you’re a fan of the man or not, whether you like/love/hate zombie movies/TV/games/etc., we guarantee you will enjoy watching George as a young college dropout, gathering a motley crew of Pittsburgh filmmaker-wannabes to accidentally launch the multi-billion-dollar zombie craze that’s still going strong 35 years later. Funny, touching, scary, enlightened, profound, silly and just plain entertaining as hell, this is officially our favorite doc of all time. Just buy the freakin’ thing … or go to videotapeworm.com/video.php and register to win one of five free copies courtesy of First Run Features, LEO and the Video TapeWorm. You’re welcome.

We’re always crowing about this terrific, long-running cop-murder-mystery show from Britain, and now the BBC is indulging our video fantasies by re-releasing a 10-disc set from the first four seasons. From the very first case, “The Killings at Badger’s Drift,” Detective Tom Barnaby (John Nettles) and Sgt. Troy (Daniel Casey) are awash in bloody mayhem and eccentric characters while trying to preserve the peace in bucolic Midsomer County — genteel murder capital of Great Britain. Charming, grisly, reserved, action-packed, funny, clever and delightful. Grab this quick before it goes out of print again.

Jet Li continues to make some of the world’s best martial-arts/action/crime dramas. Here he partners with Collin Chou (“The Matrix Reloaded”) and ravishing Cecilia Liu (“Kill Zone”) in a tale of two mismatched cops — they truly hate each other — trying to solve a series of murders. And it seems all the victims were formerly Liu’s lovers. Hmm, sounds like it’s time for a little undercover work, if you get our drift. Fun stuff.

For our money, “Barney Miller” (1974-82) was the best TV show ever made. A well-paced, brilliantly written ensemble sitcom of sorts, set in a rundown NYC police station — and no one in the cast was under the age of 32! But each of the characters was a flawed gem; from the titular captain (Hal Linden), to the would-be writer (Ron Glass), to the tired old man (Abe Vigoda), to the young cop with the unpronounceable name (Max Gail), these were people you could relate to. Our favorite episode this season was “The Ghost,” about a haunted suspect whose poltergeist wreaks otherworldly havoc in the squad room. Our highest recommendation.

With a name like that, you just know this is gonna be a hoot! Lin Shaye stars with Clare Kramer (Glory from “Buffy”) and Ray Wise (always a sign of quality) in this obvious and stupid throwback to cheap ’70s monster-horrors. When a giant alien spider busts out of a lab and goes noshing in L.A., the military succeeds in destroying everything in their path EXCEPT the monster, while Lloyd Kaufman jogs by in a cameo. Excellent special effects — including some nice thong-bikini butts — make this a keeper. Enjoy.

We are hopelessly hooked on this BBC series set in NYC at the end of the Civil War. There, in the “Five Corners” region, immigrants from around the world huddle together to eke out an existence amid filth, disease, intolerance, brutality and crime. Meanwhile, just blocks away, the super-rich live lives of decadence and privilege. And it’s the job of Detective Kevin “Corky” Corcoran (Tom Weston-Jones), an Irish immigrant, to keep them from tearing each other apart. Death lies heavy in the air this season amid suicides, assassinations, foul water and the murderous political dealings of Boss Donovan (Donal Logue). An addictive visit to a fragile period in American history. Highly recommended.

Director Pedro Almodóvar has crafted another odd gem, this time a “Carry On”-style ensemble gay comedy set aboard a doomed airliner. Antonio Banderas and Penélope Cruz — both in cameo — lead a cast filled with Almodóvar regulars, many of whom spend the bulk of the film drugged and slumped across sardine-packed Economy Class seats. Imagine a proudly homo version of “Airplane” with lots of sex, drugs and death, plus a full musical number. Not Almodóvar’s best film by any means, but a screwy experiment by one of the greats.

We’re not big b-ball rooters, but even we were impressed at how the New York Knicks turned unproven (and some said scrawny and unpromising) rookie Jeremy Lin loose on the court, resulting in a scoring streak that set records and launched a media frenzy around the Harvard grad. This carnival, dubbed “Linsanity,” was short-lived but intense, largely because so little was known about the man and so much of what was known seemed contradictory. This, then, is Lin’s humble story, including the prejudice and racism he faces as an Asian-American in the world’s tallest sport.

Justin Timberlake and Ben Affleck star in a crime thriller that’s better than you’ve heard. Affleck is a wealthy and seemingly likeable online gambling tycoon. Timberlake is the Princeton grad who believes he’s been cheated by Affleck — and travels to Costa Rica to confront the man, and maybe even join his operation. But the FBI wants T-Lake to help them bring down Affleck, who is revealed as a slimy, murderous snake. Yes, there is a lot of big-star grandstanding, leaving costar Gemma Arterton — apparently the only woman on the island — standing around with nothing much to do. Fun, if forgettable.

More goofy animated spy-spoofery from FX with master spy Sterling Archer continuing to baffle, confound and screw over his own agency, partly by design but mainly due to stupidity. The season’s highlight has to be Archer’s hallucinated acid-trip after getting bitten by a snake in a very sensitive place. Where was he bitten, you might ask? Why, right on tip of his Turkmenistan, if you must know. To say more would spoil the fun. Packed to the rafters with great bonus goodies.

For the initiated: This is the American version of a popular British series about mismatched roommates trying to get by in world where they just don’t fit in. In this case, of course, they don’t fit in because they are a ghost, a vampire and a pair of werewolves! But it’s played for drama and humor, not horror — well, most of the time — making it deliciously fun to watch. This season finds Sam Witwer, Meaghan Rath, Sam Huntington and Kristen Hager dealing with the embarrassment of grave-rot, an unquenchable hunger for blood getting in the way of true love, plus the social pressures of werewolf society. Just like your life!

Don Cheadle returns in this Showtime dramedy series that skewers today’s “immediate profits at all cost” corporate mentality. As a premier management consultant, he wonderfully comes to hate himself and everyone around him for the things he does, but can’t stop because he’s so good at it. Man, can we relate. Season 2 ends with Cheadle alone and covered with red velvet cake from Doug (Josh Lawson) and Sarah’s (Jenny Slate) wedding. Raunchy, subversive, first-rate entertainment with sexy (and pregnant) Kristen Bell. What more could you want?

Fromer U.S. Labor Secretary Robert Reich walks us through America’s — and the world’s — ever-widening income gap and explains why the loss of our long-stable middle class spells doom for America as we know it. With great real-people examples, he illustrates how a group of just 400 individuals have gamed the U.S. economy to the point where there are literally not enough resources left for anyone else (read: you and your children) to stay afloat for more than a few years. The banking debacle was a mere burp compared to the global collapse to come unless something is done now. Required viewing.

THE ACT OF KILLING

This may be the single most disturbing thing we’ve ever seen. A documentary filmmaker gives a group of Indonesians free reign to create short movies about themselves. So what’s the catch? The people in question lead anti-Communist death squads that brutally tortured and murdered more than a million people in the ’60s and ’70s. Many of them, including their leader, Anwar Congo, now see themselves as heroes, living lives of wealth and power. The movies they create are filled with musical dance numbers, yodeling cowboys, film noir gangsters and other heroic tropes. Chilling.

TOP OF THE LAKE

This odd Nordic-like drama, produced by the BBC but set in New Zealand, stars “Mad Men”’s Elisabeth Moss as an aggressive detective sent in to solve the disappearance of a suicidal, pregnant 12-year-old. What the locals can’t see (even during her great nude sex scene in the woods) is Moss’ internal dialogue: You come to realize that she sees her own self mirrored in the many obnoxious, secretive villagers, and solving the girl’s disappearance may be the key to connecting with her own missing personality. Or something like that. An absolutely gorgeous show filled with breathtaking beauty, profound despair, and a wealthy society adrift on a dark current.

WE ARE WHAT WE ARE

This is the English remake of a wildly original and very entertaining Mexican look at life, family and coping with cannibalism. When a loving father (Bill Sage of “Nurse Jackie”) unexpectedly dies, his teenage children — gorgeous Esquire babe Ambyr Childers of “The Master” and Julia Garner of “The Perks of Being a Wallflower” — face an unusual hardship: He was the one who kept the family supplied with fresh meat. Human meat. Oh, how will they survive? A clever combination of grisly gore, heartfelt emotion and black humor. Recommended.