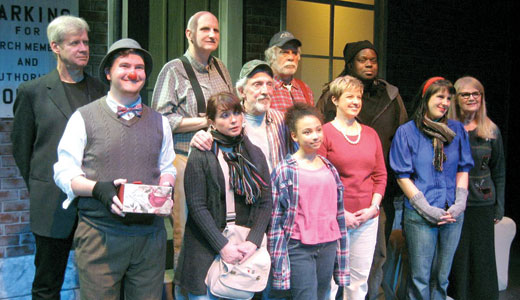 ‘A Homeless Holiday’
A Bunbury Theatre production. Directed by Juergen K. Tossman. Continues through Dec. 22 at the Henry Clay Theatre, 604 S. Third St. For tickets or info, go to bunburytheatre.org or call 585-5306.

Early on in Juergen K. Tossman’s new play, “A Homeless Holiday,” one of the characters (aptly named church volunteer Melba Mean, played by Sharon Becher) comments that it would be a lot easier to do the Lord’s work if only the poor and homeless would stay out of the way.

Religious hypocrites are easy (and abundant) targets for satire, and Tossman’s play (a Bunbury Theatre production) isn’t shy about skewering the widely held notion that the big problem with poverty is that it looks bad — a problem best solved by moving the poor out of sight.

Happily, though, “A Homeless Holiday” is less a series of indictments than a gently comic meditation on epiphanies and a call to action. Tossman sets the play on Christmas Eve, outside the door of a church in urban Louisville, where a fundraising yard sale is being set up by Melba and choir director Lucy (Jerilyn Gashi).

This churchyard (designed by Bob Bush) is also frequented by a crew of homeless folks. These are folks who’ve learned how to survive. They know what a White Castle costs — and they know when the neighborhood McDonald’s offers burgers for 50 cents.

When these homeless folks (Matt Orme as a cynical veteran with a gift for gab and a keen understanding of economics; Ian C. Quinell as a vet who lost his home despite working two jobs; a silent, eloquent clown played by Chase Gregory; a fiery Mexican played by Martha “Martie” Childress; and her feisty child, played by Hannah Shelby) collide with the folks who live in houses (including an implausibly clueless minister and his wife — Allen Schuler and Cynthia Schrader), there’s plenty of room for comedy.

But what sets things going is the arrival of Homer and Cyrus Pennybone (Mike Burmester and Brad Castleberry), who’ve driven up from Booneville to see the Actors Theatre of Louisville production of “A Christmas Carol,” but, having lost their way, wind up right in the mess.

And a fine mess it is. Over on Main Street, ATL’s annual production of Dickens’ brilliant tale of the wealth and the working poor gift wraps its revelations in opulent garb and gorgeous sets; it’s a powerful piece of humbug, and a great cautionary pageant. It’s also, of course, a fantasy in which a rich man earns personal redemption by sending a prize turkey to the family of a man he’s been abusing and exploiting for years.

“A Homeless Holiday” is raw and Spartan by comparison. A few of Tossman’s characters seem more like plot widgets than fully imagined humans. Some of the performers don’t fully inhabit their roles — and, in fact, there are a few passages that are downright clumsy. And yet there is much here to admire. Orme, Castleberry, Burmester and Becher turn in superb performances.