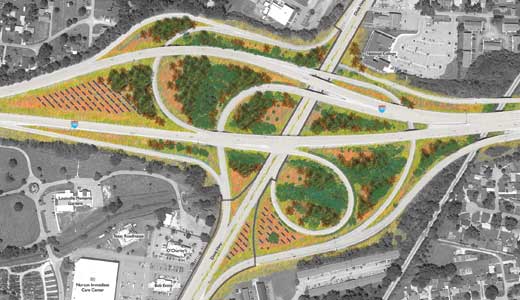 Crossing Dixie Highway as a pedestrian is like playing real-life “Frogger.” The seven-lane thoroughfare sees high speeds and seemingly never-ending traffic, including plenty of semi-trucks. With no center median offering a refuge between opposing directions of traffic, all most pedestrians can do is watch cars coming in one direction, dart across three lanes, pause in the active turn lane in the center, check cars coming in the other direction, and then dart across the remaining three lanes. Oh, and if it happens to be at night, remember there’s poor lighting in many stretches of the road.

It’s no surprise, then, that law enforcement and elected officials have consistently singled out Dixie Highway in Shively as being one of the most dangerous corridors in the county — particularly for pedestrians and bicyclists.

The Dixie Highway Improvement Project hopes to change that. The project, which is being funded through a $5.5 million appropriation into the State Road Fund by the Kentucky General Assembly, is touted as being about both beautification and safety. As Metro Councilman Rick Blackwell (D-12) explains, “It’s a Dixie redo” that focuses on making the regional commercial corridor more attractive aesthetically and to potential businesses. Previous meetings were held earlier in the year to gain initial insight into residents’ concerns and desires for the project.

The Corradino Group was awarded the $600,000 design contract in September. At the Southwest Government Center last week, their representatives unveiled design options for phase one, which will focus on the 1.5-mile stretch of Dixie Highway between Crums Lane on the north and Rockford Lane on the south. The segment includes the Watterson Expressway interchange, which is the busiest highway intersection in the state of Kentucky. This portion is particularly hazardous for pedestrians because it lacks continuous sidewalks, requiring those crossing to traverse across freeway entrance and exit lanes where cars are often traveling at high rates of speed.

Another major concern being tackled is the intersection of the Crums Lane, Seventh Street and Dixie Highway interchange, which often causes confusion for motorists. Originally, a roundabout was proposed, but representatives say that option looks less likely because of the space needed in order to accommodate 18-wheelers.

One of the most dramatic elements of the proposals involves adding a pedestrian walkway down the center of part of the highway — an addition some in the crowd seemed to believe is frivolous. Several questioned how many pedestrians actually walk down Dixie Highway, and whether those people are really the ones contributing to the local businesses set up along the road. “Look at the percentage of them versus all the trucks who use Dixie Highway,” mused one woman to LEO, adding a bit crudely, “I mean, I’m sorry they’re dying, but …”

Despite the blatant prioritizations made by a few truck deliveries over human lives, many expressed their desire for sheltered TARC stops with bike racks and continuous sidewalks through a posted voting board, where attendees marked which elements they felt should be at the forefront of designers’ and engineers’ minds.

Another hot topic was whether raised medians — meaning the ones you can’t drive over — are safer for cars and better for businesses than the current center lanes featured on Dixie Highway. One older man was insistent that the center turn lane needed to be there for someone to swerve in during an emergency. Joel Morrill of Corradino and his fellow representatives did their best to relay federal traffic study findings that show these “access management programs” dramatically reduce collisions because most collisions involve a vehicle turning. Small business owners, particularly ones who rely on drive-by traffic, expressed concerns that medians would hurt their business because people driving on the opposite side of the road would have a more difficult time getting to their business. Again, Morrill cited a previous study where business owners along a road that put in medians said their businesses had gone up or stayed the same after the installation of raised medians.

Something bold and different — that’s what Blackwell told the crowd last Tuesday he hopes the revamped Dixie Highway Improvement project will bring to his district. Many of the design plans unveiled Tuesday involved creating a “unified and distinct environment.” Louisville Mayor Greg Fischer said at an earlier press conference that the project coincides with other efforts to revitalize the area, including Digital Dixie, which helps local retail shops and businesses set up websites.

What that means is banners and benches that brand the neighborhood, updated TARC stops to promote usage, and inviting wildlife that distracts from the walls of concrete and sea of roads and parking lots. Aware that no budget exists for landscape upkeep, Corradino is exploring the use of native wildflowers, which would require low or no mowing, to beautify the Watterson Expressway interchange.

Despite these acknowledgments of ongoing budget restraints, local residents repeatedly expressed concerns about maintenance. Who will be trimming that pretty tree in the rendering on the pedestrian walkway? Who will pick up the litter that accumulates along the new sidewalks and walls that protect them from several lanes of traffic?

“If they weren’t getting state money, they wouldn’t even be thinking about this,” said Carl Ford, a longtime resident of the community. “Around here they don’t trim until the branches fall off. How about you take that $5.5 million and fix what you’ve already got here now?”

Construction on phase one of the Dixie Highway Improvement Project could begin toward the end of 2014, pending regulatory approvals.