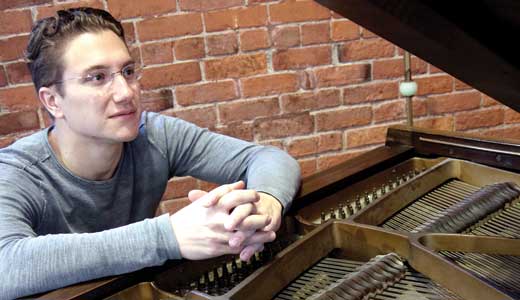 When he steps onto the stage as the new music director of the Louisville Orchestra next fall, Teddy Abrams will begin with some very definite ideas of what his role should be.

“You have to have a civic mind and an artistic mind — you’re doing both, all the time,” says Abrams, who is currently the assistant director of the Detroit Symphony and will succeed Jorge Mester as the Louisville director for the start of the 2014-15 season in August.

“That’s the role of music director, especially in this country,” says Abrams, who is just 26 years old but seems to have put a young lifetime of thought into what lifts a skilled conductor to leader of the band. “This country has always needed music directors who are both visionary and leaders, and you find that in a long line of great music directors: my colleague in the Detroit Symphony, Leonard Slatkin; my very dear friend and mentor Michael Tilson Thomas; and his mentor, Leonard Bernstein.”

That’s a tall list of famed American directors, but all appear — if you’ll pardon an allusion to thoroughbred horses — in Abrams’ extended pedigree.

Abrams first came to the notice of Tilson Thomas when he was 11, when he wrote the director of the San Francisco Symphony a letter asking for tips on conducting. Later, Abrams joined the symphony as a pupil, then assistant conductor. He was also an assistant when the New World Symphony Orchestra — another Tilson Thomas project — opened the spectacular Frank Gehry-designed New World Center in Miami Beach in 2011. Abrams himself earned a paragraph in New York Times critic Anthony Tommasini’s story about the event. There’s no doubt Teddy Abrams is on the fast track. And no doubt the Louisville Orchestra hopes he will bring a youthful starburst to the symphony and its city.

On the day Abrams is introduced as the Louisville Orchestra’s conductor-to-be, he steps into a hallway at Whitney Hall for a few words with a writer and talks straightforwardly about his list of music directors who have extended the art of their orchestras beyond the concert stage.

“Leopold Stokowski, he was like that, and so was Gustav Mahler,” says Abrams. “They realized there was a broad reach that was both the requirement and the expectation. And certainly, Bernstein is the model for everybody.”

Indeed, Leonard Bernstein (1918-1990) would be a model of the civic and artistic mind. Stylish and dramatic on the podium, Bernstein sent the New York Philharmonic soaring. He was also a composer who could take his stuff to Broadway with “West Side Story” and onto television with the CBS series “Young People’s Concerts,” in which he explained how music is made. Bernstein held a place in the Camelot court of JFK and Jackie Kennedy, and became a household name in pretty much every house in America.

So it’s kind of cool to hear Teddy Abrams cite Leonard Bernstein as a model. This from a guy, who, unless somebody younger sneaks in with some other orchestra in the next few months, will be the youngest conductor of a major symphony in the United States.

Now, everyone knows there are fields of endeavor in which young up-and-comers are expected to tread humbly — but music isn’t one of them. If a Music Man comes to town with 76 trombones leading a big parade, a lot of people will turn up to see what’s happening.

And that is exactly what a rejuvenated Louisville Orchestra is hoping will happen here in River City. In recent years, the orchestra suffered dwindling audiences and declining patron donations, and even went bankrupt and missed a season. But under a new board of directors headed by Brown-Forman vice-chairman Jim Welch, the symphony appears to have regained some financial footing and repaired relations with its musicians. The orchestra began searching in earnest for a new music director, with a raft of young talent considered, including the other finalist, Marcelo Lehninger, a dashing young assistant conductor of the Boston Symphony. Abrams got the nod.

The orchestra lost several top young players when it shut down, but it has retained a senior backbone of talent. Mester, who once put a major spark into the Louisville Orchestra when he succeeded founder Robert Whitney in 1967, was called back in recent seasons to help maintain the orchestra’s sound. Which he has. But now it’s Teddy’s turn.

Abrams has conducted the Louisville Orchestra twice, and the orchestra is adding a concert on Feb. 20 that he will conduct. That’s in addition to the regularly scheduled subscription concerts of Feb. 27 and March 1, in which Abrams will conduct the Shostakovich “Symphony No. 5” — a big number.

As the orchestra was signing Abrams, it also handed the business keys to new chief executive officer Andrew Kipe, who notes Abrams’ commitment to the civic role of music director. “Teddy’s a good choice for a number of reasons,” says Kipe. “His youth, his outgoing personality, his ideas about outreach — he’ll be able to connect with audiences in many different ways.”

Plus, Abrams will live in Louisville, as recent conductors have not. He seems a natural to become an artistic star of the city. And maybe a civic one, as well.

“We can’t sit in our ivory tower anymore and assume that money and audiences are going to come,” Kipe says. “Orchestras need to get out and engage with people in innovative ways. Teddy has great ideas around that. I’m excited about that. And the orchestra is excited about that.”

Audiences might expect the Louisville Orchestra to renew an interest in contemporary music. A half-century ago the group staked out a spot on the musical map with recordings of new music on its own label — funded by the Ford Foundation with the sound engineered by Columbia Records.

“I know this orchestra’s history. And that needs to continue,” Abrams says. “We can’t just let that be something that’s a legacy. I always say we’ll know we’ve achieved a great music culture when people are clamoring to hear new music. When it’s a fact we have new music on the programs, and people just can’t get enough of it.”

Of course — it says here — the new music will have to improve if it is to interest audiences. It doesn’t much now. But that might happen. Abrams says interest in new music “is the responsibility of orchestras, as it is of the composers, themselves. We need to wake up to the fact that composition needs to connect with human beings.”

All in all, serious talk from a 26-year-old. But Abrams waves off the phenomenon of his youthful years.

“I’m here because my vision and my mission fits with what the orchestra wants and needs,” he says. “That’s a kind of an ageless and timeless thing — to get this orchestra to a place where everybody in our community is aware of it and can interact with it.”

The artistic notes come on the downbeat.

“I’ve been here two times now, and both times the musicians have been very vocal about wanting to take the orchestra into the future, and to grow it,” says Abrams. “It’s wonderful when the musicians are very much ready for an adventure, too. To see where the music is going to take us.”