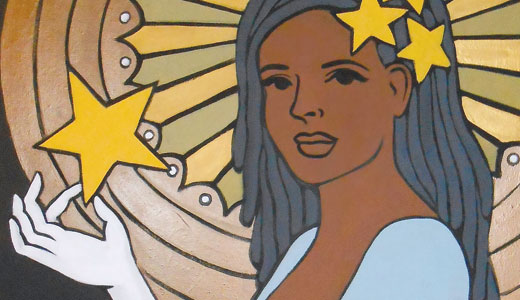 We’ll save the spiel about how record stores aren’t dead, vinyl isn’t dead … you know, the usual trend-piece filler meant to educate (or confuse) those who stopped buying records after the first Coldplay CD gave them something new to jog to. The rest of you LEO readers know there’s a half-dozen awesome places to buy records locally today, and the newest places are bursting at the seams with enthusiasm to do things they always wanted to do, like bringing crazy great Japanese psychedelic blues guitarists such as Suzuki Junzo to play. Now touring the U.S. to promote his new albums, Portrait of Madeleine Elstr and Sings 2, Junzo has collaborated with members of Acid Mothers Temple and Fushitsusha. Tonight, beloved innovator Tim Barnes opens. —Peter Berkowitz

If you haven’t heard about the genre called “Americali” yet, that’s because it’s currently a party of one (duo). When you decide to give your band a brand-new genre identifier, it’s going to be lonely at first. But in reality, the bluegrass-soaked folk spun by Melody Walker and Jacob Groopman is familiar and comforting, while remaining fresh and invigorating. Also members of the award-winning progressive bluegrass band Front Country, San Franciscan Walker and Richmonder Groopman released their debut album, We Made It Home, in October, produced by the great Laurie Lewis and featuring a reimagineering of Paul Simon’s “Graceland” that makes as much sense as a folk/grass song as anything else. Local ’grass heads the Bibelhauser Brothers open, making this even more bangin’ for your bucks. —Peter Berkowitz

Guess who’s back (back, back), back again (gain, gain)? It’s Lillian Baxter (tell a friend), for a very special, holiday-friendly, fast-paced, laugh-laced Christmas show! Beloved by audiences from Sanibel, Fla., to Indianapolis to right here in Derby City, this month Baxter is giving her signature brand of big-hearted cabaret a holiday twist. The date is December 1973 as the washed-up former star of the silver screen relives her 1963 Christmas special, hoping to revive her faltering career with a night of holiday cheer. Joined by Shively’s shyest piano player, Moeshe Rosenblatt, for an interfaith festive extravaganza, Baxter turns up the camp and hauls out the holly for what promises to be a fun romp of an evening. After all, nothing says holiday cheer like carols from a drag queen. —Jennifer Harlan

Artist Kathleen Lolley was a star, especially locally, as soon as she began showing her paintings a decade ago. Since then, the CalArts graduate has become even more well-known internationally, showing in bigger cities and selling to Hollywood stars. The half-Louisville/half-Pittsburgh native’s new local show, “The Land of Spirits and Shadows,” opens Friday during the monthly Trolley Hop chaos, at WHY Louisville NuLu, a suitably wacky home for an artist who thinks owls are people, too. The show’s organizers warn that the goth/surrealist sells out her shows quickly — as in, before daylight fades. And if you want to find Lolley before the show, she says, “I currently reside in The Dark Forest where I spend most of my time making crafts, comics and art.” —Peter Berkowitz

Posing on tiptoes out in public is a good way to be ridiculed. Unless you are a professional dancer, of course, when it becomes a thing of awe-inspiring beauty. Louisville photographer Kevin Talley knows this and has created a body of work that combines the visual and performing arts. “Urban Dance Project” features dancers from Louisville and Lexington engaged in ballet and aerial silk performances at different locations around the city, including the Big Four Bridge and the Muhammad Ali Center. Talley knows a thing about beauty; he is a fashion photographer who has worked in Miami and Los Angeles. The opening reception is during the Dec. 6 First Friday Trolley Hop from 6-9 p.m. (the trolley now includes the South Fourth Street corridor in its route). —Jo Anne Triplett

Anessa Arehart is one of the most important artists in town. Who says? Why, LEO Weekly and Louisville Magazine, of course. She was featured in the publications one right after the other, giving her a one-two punch of fame. Her solo exhibition, “Field Guide for Modern Deities,” shows she’s striking when the iron is hot. Over the years she has honed her craft, making her paintings with their combination of pop, feminism and folk art easy to recognize. “I started painting when I was a little girl and never really stopped,” Arehart says. “I hope to drop dead as a very old lady with a dog at my feet, a paintbrush in my hand and my lipstick on.” The opening reception will be during the Dec. 6 First Friday Trolley Hop from 6-10 p.m. —Jo Anne Triplett

The Highlands will be particularly abuzz Saturday evening as carolers and revelers bask in all things holiday during the 28th annual Bardstown Road Aglow. Shops, restaurants and bars will all be open and decorated for the holiday — and Santa is even scheduled to make an appearance around 6 p.m., once he and his merry elves make their way to Bearno’s by way of the Thirsty Pedaler. Also scheduled will be a best-decorated restaurant/shop contest, free trolley rides up and down the corridor, and the fourth annual Holiday Cocktail Contest sponsored by Four Roses at most bars along the beaten path. Bundle up, grab the kids and prepare to hoof it in the Highlands in the name of fun, community and December debauchery. —Sara Havens

The Flea-Off Market returns and moves indoors to the Mellwood Arts Center this weekend for the annual Holiday Bazaar. This is your chance to buy local and cross a few gifts off the holiday shopping list. The Flea-Off gathers an eclectic array of local businesses and artisans with an abundance of affordable deals, including some higher-priced, splurge-worthy pieces. But there are still plenty of handmade, hand-glued, hand-carved, hand-sewn, vintage, locally grown, 100-percent vegan and gluten-free goods at reasonable prices. It is everything you can’t find at the mall. Dog owners will have to leave their little buddies at home this time, but that can easily be reconciled with a handmade chew toy or some fancy jerky. —Lara Kinne

It’s time once again for Shamrock Pet Foundation’s annual fundraiser. With a bevy of products for the holiday season, adoptable pets, tarot card readers and animal communicators, it’s bound to be fun for everyone. According to Shamrock’s founder, Sharon Mayes, “People always enjoy this event because it has so much to offer, but this year it is bigger and better than ever before.” She says there are themed gift baskets, artwork, jewelry, sports memorabilia, crafts and holiday decorations. There are also hundreds of animal-related gifts such as gourmet dog treats, pet beds and homemade catnip toys. Children, whether four-legged or two, can get their photos taken with the Grinch. Lunch and baked goods will be readily available to purchase, and there’s also a silent auction featuring a basketball autographed by Rick Pitino. —Sarah Duncan

How time flies. The Louisville Ballet is happy they can celebrate five years of the revamped “Nutcracker” underwritten by Brown-Forman. But on a sad note, their artistic director, Bruce Simpson, who is one of the masterminds behind this production, has said he will retire next year. On this final season with Simpson at the helm, Brown-Forman has made the ballet even more special by funding the Louisville Orchestra to play at all performances. Since children are at the core of “The Nutcracker,” the Louisville Ballet is sponsoring Sugar Plum Parties on Dec. 8 and Dec. 14, with the chance to meet the cast members before the shows. There’s also a story time, with readings by a Louisville Ballet dancer, at the Iroquois branch of the Louisville Free Public Library on Dec. 12. —Jo Anne Triplett

At 89 years old, June Key has a lot of stories to tell, but don’t worry, they’re not all about walking barefoot in the snow uphill both ways to school, and they don’t involve any pinching of cheeks. This feisty octogenarian once shaved her head to enter the boys-only Soap Box Derby. She also helped racially integrate school systems across the country, starting right here in her hometown of Louisville. Even today, this remarkable local is sharp and stays active with a blog called The Raving Pundit. With the help of her daughter Tara, Key has self-published a memoir, “Blue Streak,” named after the beloved bike she rode around the West End while growing up during the Great Depression. She’ll read select passages and sign copies on Sunday. —April Corbin

Madeleine Adams has grown up from girl to woman in the past decade, sticking firmly to the independent and underground music scene when her talent demands even more attention. The native of Athens, Ga., moved to Bloomington years ago to be closer to her then label, Plan-It-X, and to be more centrally located. Through years of touring and releasing four albums, the indie/folk singer-songwriter returns to Louisville, where she has earned a good following, for an all-ages show (drinks available for 21+ with ID). Now living back home in Athens and working with the influential Orange Twin label, Madeleine’s country-haunted songs are even more in line with what is in the zeitgeist currently, so this is a good chance to see her in a more intimate setting while you still can. —Peter Berkowitz