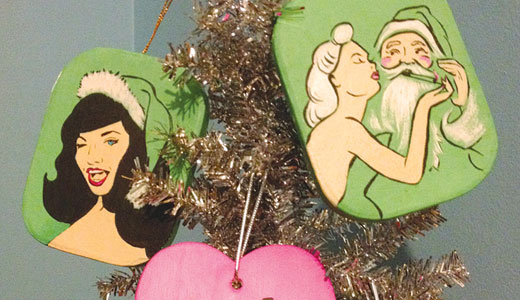 Ramsi’s Café on the World

In the early 1980s, there was no World Wide Web, no Google, and The Courier-Journal was known as a quality newspaper that consistently produced great, award-winning journalism. While David Inman’s “Incredible Inman” column never received the Pulitzer that some (in his family, mostly) thought it deserved, it was a mainstay of the paper for 32 years. In that time, Inman was the man with the answer to every now-easily searchable TV question like “What was the name of the bike shop guy who tried to molest Arnold and Dudley on ‘Diff’rent Strokes’?” or “What did the acronym ALF stand for?” Now the best of the column has been collected in an old-timey book, which you can buy while nibbling on apps. “Petticoat Junction” questions are encouraged at this event. —Peter Berkowitz

The artsy doo-wop group Gold Light, based in Asheville, N.C., is headed by Joe Chang, a former Germantown resident who also produced their self-titled debut; he now tours with a different lineup under the same name. Fellow Asheville band Kovacs and the Polar Bear originally was a folk duo named after singer/guitarist Nick Kovacs and drummer Andy "Polar Bear" Woodward. The band eventually expanded into a five-piece to back their debut, Second Sister. Kovac’s sound demands an energetic ear and easily compares to Mumford & Sons, with a lot more edge and textural flow. Then there’s Twin Limb, a fresh breeze of dreamy accordion-pop who call Louisville home. Come get cozy and enjoy the sounds at one of the oldest venues around. —Lara Kinne

‘May Your Heart Find Christmas’

Cabaret is no longer a dying art form in Louisville, with support from groups like Pandora Productions and their diverse series of shows every year. That includes the annual holiday show, a cabaret extravaganza sure to validate the jolly spirit within. “May Your Heart Find Christmas” wants everyone to feel it, too. The original production runs for three nights in the Henry Clay Ballroom, starring a beloved cast of familiar faces in the Pandora family. Miss Gayle King is music director and Michael Drury artistically directs. The show promises to be a quaint experience with many laughs and memories to share in a fresh format. So, round up friends for a different kind of night out. Have one big laugh before the last-minute holiday stretch that ends on Christmas Eve. —Lara Kinne

“The Kings of Christmas,” a contemporary holiday story, returns to The Bard’s Town for a third straight year with its original cast and crew. The play is a heartwarming and hilarious tale about the family members of a deceased Elvis-impersonating magician known as the “Magistic King.” That sentence alone should be enough to get you moving that mouse over to the button labeled “Reserve Tickets Now” on the website. This is the kind of play you and your siblings could bond over. If your siblings live in another state or you’d rather bond with people who aren’t related to you, then take your friends. Either way, take note that drinks are served during the performance. Ho ho ho! —Sarah Duncan

Joseph Arthur has always been good at making friends. When he does so, he doesn’t just stop with Joe Lunchbox; Arthur won over Peter Gabriel and R.E.M. early on, and now the WFPK favorite brings a band including R.E.M. bassist/Shiny Happy Person Mike Mills to the intimate Zanzabar. Drummer Bill Dobrow completes the trio, who are touring to support The Ballad of Boogie Christ Act 2, part of a planned trilogy. (The album also includes another luminary, pianist Garth Hudson of The Band.) Arthur also has a new book to push, “I Miss the Zoo and Other Poetry Selections,” which sounds less rocking but more legible. The book also features some of his paintings, and did we mention yet that he’s also good buddies with Pearl Jam? —Peter Berkowitz

There’s a new burlesque troupe in town, and they go by the Derby City Dames. Their premiere show takes place Friday at Purrswaytions (formerly Tinks), where the five members and their “kittens” will dance, perform and tantalize along to music of the ’30s and ’40s, as well as modern pop hits. Created by Tina Seaton and guided by renowned burlesque performer Monet Magnolia, the group models itself after traditional burlesque, augmented by belly dancing, ballet and modern dance. “Our goal is to perform shows every other month, because you never get tired of seeing beautiful ladies take you back to old-school burlesque,” Seaton says. The donation of a child’s toy will knock off $2 from the price of admission. Proceeds go to the Center for Women & Families. —Sara Havens

For those of you whose souls are still smarting from the disappointment that was the Carrie Underwood broadcast of “The Sound of Music” (i.e. “American Idol: Nazi Austria Edition”), the Little Colonel Players offer up a different sort of performing family. The Nightingales are a foursome of theater-makers — son Jack, a cabaret star; parents Charlie and Beatrice, old music hall stars; and Jack’s co-star Maggie, desperately seeking true love — whose lives are upended during a surprise visit to Jack from the parental units. Charlie and Beatrice have overstayed their welcome when Mom runs off to France in search of a lover, with the ensuing chaos forcing Jack and Maggie to confront the attraction staring them in the face. Playwright Peter Quilter calls “The Nightingales” “a really funny play, with charming characters, lots of nostalgia, and a dash of romance,” and he’s not biased at all. —Jennifer Harlan

For years, architect and historian Steve Wiser has given us a variety of written perspectives on the best of local life and style. In time for the season of giving gift-books, he’s come up with a new one, and it’s a beaut. “Historic Houses of Louisville” gives us breathtaking and envy-worthy photographs showing 45 homes in all their glory. Carmichael’s is hosting the author on the afternoon of the annual “Olde Tyme Christmas Celebration on Frankfort Avenue.” Of course, Wiser’s book shows some homes with libraries that can fit much of the best of Carmichael’s — not to mention porches on which you could fit the “Old Tyme” strolling carolers. Wiser might also share which historic homes are available … to those who really think they’re in good with Santa. —T.E. Lyons

How much would you pay for a beautiful object that took hours, days and even weeks to produce? How about $20? The Art Sanctuary makes that possible with the annual $20 Art Show, counting more than 30 Louisville artists who want to get these goods out the door. They are artists of all skill levels, but here they level together for a flat $20 price tag. Beautiful, ugly and intriguing pieces of work in exchange for a piece of cotton-based paper; that beats any Black Friday deal from a value perspective. The show is open for only three hours, but that is all the more incentive to nab some cheap art while it’s out there. Think about it: Do you really want to give your loved one another soulless gift card? —Lara Kinne

The Louisville Visual Art Association (LVAA) describes themselves as “a catalyst for education and participation in the visual arts, enriching our community’s culture and artist spirit,” which makes them a perfect partner for John King’s Louisville Is for Lovers music catalyst project. For more than a decade, King — primarily a visual artist — has issued Lovers records of all kinds, first as compilations of local talents, and lately moving toward cover projects featuring local talent saluting inspirations from the Misfits to the Palace Brothers. The latter, out now, is celebrated with performances tonight by Tender Mercy, Lydia Burrell and King’s Gallery Singers. It’s also the closing night for LVAA’s visual art tribute show, “Troublesome Houses.” Donations are encouraged to keep local art nights like this going, and $5 will get you a catalog of the visual exhibit. —Peter Berkowitz

‘Close to Home’ by Martin Rollins

Where do you live? Not just physically but metaphorically. Artists live within their work as a product of their creative spirit. But the journey to the finished piece is the heady creative part, full of inspiration and magic. Martin Rollins reveals he lives “in the streets and places close to my home in Crescent Hill, in solitary moments where fleeting light, shadow or color resonated with me. Moments where you catch your breath …” His latest series of oil pastel drawings are not records of location, although some are recognizable. “In (conveying a sense of place),” he says, “I am less concerned with rendering a specific site and its various details than I am in creatively responding to the thoughts and feelings the site evokes in me.” —Jo Anne Triplett

The co-op gallery PYRO exists because artists need it to. From its days as the Firehouse Gallery to its current address in NuLu, it’s been artist-driven. That means it needs a constant flux of new talent. Their latest group show focuses on six new members. Amanda Briede says her work “attempts the futile task of capturing the energy of rock ’n’ roll.” Two other women, well versed in multi-tasking and multiple media, have also joined: Beverly Glascock, attorney and LVAA committee member, and Kay Polson Grubola, curator and former art director. Sculptor Shohei Katayama “deals with underlying patterns inherent in nature,” while painter Gabrielle Mayer’s use of clothing as metaphor is “often mannered but occasionally rude.” Phillip Rodriguez uses glass to explore his interest in psychology. Due to the recent weather, the reception has been moved to Friday from 6-9 p.m. —Jo Anne Triplett