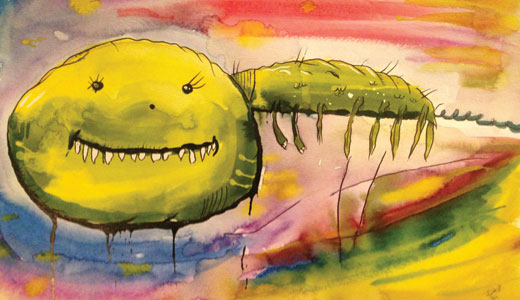 For the final WFPK-presented free Wednesday night concert of 2013, the public radio station offers a very special present for their listeners, indeed. Headliner Tony Joe White, now 70, is an underrated cult legend, best known for his late-’60s hits such as “Poke Salad Annie” and “Rainy Night in Georgia.” His songs have been recorded by Elvis, Tom Jones, Brook Benton and Tina Turner; he helped the latter come back in the ’80s. He’s made a couple dozen of his own albums, including his latest, the deep blues Hoodoo. Rising Nashville act K.S. Rhoads opens. Listeners are encouraged to bring non-perishable items to be donated to the Dare to Care food bank. WFPK and Clifton Center members will get preferential seating (unless they want to donate them to the less fortunate). —Peter Berkowitz

For the Clifton Center’s third annual night benefiting the Coalition for the Homeless’ work with our less fortunate, there’s the usual strong and big list of musical performers, in addition to a silent auction and soups and stews from seven of Louisville’s best restaurants (including Eiderdown, Relish and Harvest, among others). The event’s staffers are all volunteers, and the chefs, behind-the-scenes crew and the musicians (including Joan Shelley & Nathan Salsburg, Dick Sisto, John Gage, Tyrone Cotton, Hog Operation, The Bibelhauser Brothers and Justin Paul Lewis) also donate their talents for a great cause. Tickets are available at the door, at the venue’s site or at the Carmichael’s Bookstore on Frankfort; the $20 tickets include $12 in food and drink vouchers. —Peter Berkowitz

Want to know Alyssa’s secret? Here’s a hint: She’s the star of this month’s “Hard Candy” holiday ball (go ahead, make a pun, we’ll wait). The toothsome “RuPaul’s Drag Race” fan favorite and defrocked Miss Gay America and All American Goddess spent much of her season battling with frenemy Coco Montrese, as well as making her audience laugh (intentionally or not). The performer, whose first name pays tribute to the legendary Hollywood diva Alyssa Milano, hopes to launch her own Logo spin-off, “Beyond Belief,” showcasing her Texas dance company. Tonight begins at 10 p.m. with a VIP meet-and-greet with Ms. Edwards (the extra $ will also get you a vodka cocktail … did you make a “cocktail” joke yet?). Other performers include The Diva Extreme: Syimone and Vivica Heart. —Peter Berkowitz

There’re some strange events coming up in the name of feeding and clothing the homeless — and they fall under the leadership of Sweaty Sheep Ministries. First off is a Christmas concert at Headliners on Thursday, featuring Danny Flanigan and the Rain Chorus, J.D. Shelburne and comedian Frank Morris. All proceeds go to buying shoes for the homeless, which sounds normal, right? Well, the second event is a 5K race on Dec. 22 where the runners have to chug eggnog at each mile marker … and they’re encouraging the homeless to join in on the fun, which is where the shoes come in — the money raised at Headliners will buy shoes for the homeless interested in running the race. A Christmas dinner will be served after the race. Go to the website and figure it out for yourself — I’ve got more questions than answers. —Sara Havens

Whether you celebrate Christmas or not, you have to admit this is the time of year for the classics. It just seems as though everyone should be nestled around a fire sipping cocoa and admiring the decorations on the mantle. Those are the iconic December images. Where theater is concerned, it doesn’t get much more classic than Shakespeare. Kicking off its “season of storms,” Savage Rose Classical Theatre Company brings you “Twelfth Night.” Directed by Charlie Sexton, this play is a twisted comedy that reads a little like a soap opera. Set in Illyria, the play includes twins who were separated by a shipwreck, ladies dressing as lords for romance, and lots of confusion and pranks all tied together with some nuptials and romantic blunders. —Sarah Duncan

Louisville’s favorite eye-candy store, Ultra Pop!, hosts an ultra holiday party on Friday. Local artists will be onsite to peddle fresh art for the gift-giving season; you may recognize some names: Angryblue, MissHappyPink, Jeral Tidwell, Sarah Smith, MadPixel, Ben Sears and Nick Knight. But you’re more likely to remember them for their distinct works of art. Also, there’ll be plenty of in-store specials, raffles to win and free stuff. Ultra Pop! is the ideal spot to find original art not found anywhere else; it is also Louisville’s hub for pop-culture collectibles old and new. A visit inside can inspire the dullest of minds with its colorful array of art, graphic books, toys and bizarre conversation pieces. Peep the Ultra Pop! Facebook page for additional promotions. —Lara Kinne

“Flight of the Roseate Spoonbill,” “Las Meninas and Red Poppies,” “Moonlight and Gloves” — the titles included in Carlos Gamez de Francisco’s latest show give just some indication of how fanciful and captivating his work can be. With echoes of Japanese ink drawings, 17th-century Spanish masterpieces and graphic novel illustrations, Francisco skillfully melds old and new with saturated patches of ochre, black and rust. Born and raised in Holguín, Cuba, the 26-year-old moved to Louisville in 2009; since then, he has served as artist-in-residence at the Ali Center and won the LVAA’s Norman Kohlepp Merit award. Of his work, he says, “My figures, which seem to escape the laws of reason of physics and biology, are only our alter egos, usually friendly monsters, but monsters in the end … My artistic curiosity is intense, and that is where I live my life.” —Jennifer Harlan

You know, you love Steve “Chili” Rigot for his role as the vocalist with The Endtables, one of Louisville’s first and best punk bands. Now, with recent hospital bills to be paid, some special friends have joined together to give back to him. For only $5, Headliners hosts The Richie White Orchestra, Juanita, Brett Eugene Ralph’s Kentucky Chrome Revue, Catherine Irwin, Bonnie “Prince” Billy and Craig Wagner, with DJ Kim Sorise (who also spins at the after-party at Seidenfaden’s). For those under 40, don’t get it twisted — these are some slightly older folks who have as much passion, skill and weirdness now as they did at 21. Respect. The show starts with a screening of the triple feature of shorts “Heavy Date,” “Jack and the Northwest Wind” and “Super Rocket V8.” —Peter Berkowitz

We all know that Winter Solstice is a time to dust off your finest druid robes and get rowdy as a pagan, but this year the good folks at Cropped Out are partying like it’s 2002. Reuniting for the first time in almost a decade, local garage-rock legends Starkiller are performing one night only for your listening pleasure. Starkiller has an undeniable pedigree with a constituency that included future members of The Children, The Phantom Family Halo and Slint — further evidence, if you need it, that there was real talent involved in this project. The gleefully dissonant Tropical Trash is also playing, bringing its mix of No Wave punk and sarcasm to the table. Opening is local stalwart Shedding, offering a comparatively lighter and more experimental touch to the evening. —Syd Bishop

Artist and singer-songwriter Josh Mitcham exposes his love for all things commonwealth of Kentucky in a new exhibit at the Regallery at Regalo. While he has spent the last few years singing and playing across the South, he has also turned back the clock to his early days as a visual artist. His work, created on reclaimed canvas and featuring bold images of iconic Kentuckians, is on exhibit through the end of December. Mitcham’s commissioned works also are featured at Maker’s Mark Distillery, his paintings have been on display at the Ali Center, and 24 of his murals can be found around Louisville in association with the Louisville Center for Neighborhoods. —Kevin Gibson

Most adults get a kick out of the drawings children create as easily as breathing (if paper’s not available, there’s always the walls). Ryan Case’s new paintings are based on this idea, but he takes it a step further. “(I’ve) taken the drawings both (of my) children have done, used the exact lines, but added (my) own twist to their original ideas,” he explains. Lulu+Gigi+Dad = new art. I’ve never heard of clay paintings before, but I like the way Golden Fin describes the process. He says he presses “pigmented clay behind a transparent smooth surface … in which (I) mold the clay as such to form a symmetrical balance between the abstract and the concrete worlds.” His new works are based on his thoughts about “today’s evil empire: corporate America.” —Jo Anne Triplett

To readers of this paper, Britany Baker may be better known as LEO Weekly’s former art director. But she is foremost a painter. Her oil paintings tend to be beautiful, abstract and rather otherworldly, convening strength and fragility within the same shape. “(My work) attempts to capture how things grow and make space for themselves,” Baker explains. “This is happening in the garden and in the body where things are slippery and flexible, in water where the volume of space is tangible, inside a bone where marrow is being produced. The translucence and gravity of these things hints at the stretching that occurs during growth, pushing even the air out of its way. These works are … created in a stream-of-consciousness fashion but are intended to be understood as real …” —Jo Anne Triplett