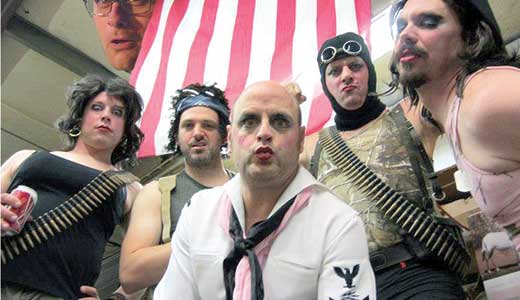 While you’re enjoying the Christmas season, remember there’s more to it than just buying Mom a sweater. Instead, you can save lives in an hour by donating at the 36th annual American Red Cross “Donorama.” The need for blood is constant, and supply suffers when everyone’s traveling, out of school and sitting around the house with relatives. Childcare will be available onsite for donating parents, and the hotel will provide hot meals. Donors will also receive a $5 KFC gift card and a two-ounce sample of Dunkin Donuts coffee, plus a coupon for a free pound of coffee. There’s also a raffle, with prizes including a pair of tickets to the UK vs. Mississippi State game on Jan. 8. Call 1-800-RED-CROSS or go to redcrossblood.org to schedule a time. —Peter Berkowitz

Louisville is 8-8-1 all time in bowl games, including two rockin’ upset victories in the Fiesta Bowl and Sugar Bowl. But the Cardinals (10-1) will come in slightly favored over the Miami Hurricanes (9-3, 19-17 in bowls) in the Russell Athletic Bowl, in Orlando, Fla. It’s a game Louisville can win — especially if it finally forgets about “establishing the running game,” which its coaching staff spent all season trying to do (without success), and instead turns quarterback Teddy Bridgewater loose with a full army of receivers sent downfield to haul in Teddy’s tosses. That would be this armchair quarterback’s game plan as we tune in Saturday for ESPN coverage, with an ear cocked, as always, for the dramatic word pictures drawn by Paul Rogers on WKRD 790 AM radio. —Bill Doolittle

A night of weirdness ensues for the final C.H.I.M.E. music event of 2013 — of course Rude Weirdo would be on top of this bill. The self-proclaimed “failed performance artists” beat off askew rock tunes under the slimy-tongued lyrics of Eric R. that are sometimes raunchy, sometimes a full-on caricature, and other times not important at all. The band aggregated with two former members of the elusive cult band, The Web; on this night, Web guitarist Andy Willis will join as a guest in Rude Weirdo. Louisville’s oldest rap duo to wear fake beards, Bus Hus, is a suitable lead-in with its lo-fi, psych-driven hip-hop. Before that, Sweatermeat give a dose of shameless “tard rock.” And the New Shitbirds play their psycho “shit rock.” —Lara Kinne

Masked marauder ?Z made quite a splash when he came on the dance music scene last year with his ???? ???† beat series, which quickly propelled him to stardom and garnered support and praise from the likes of Diplo, Skrillex and A-Trak. As ?Z dropped banger after banger, fans and critics alike grasped at straws trying to pin down just who the “real” DJ behind this persona might be. The truth is probably a lot less interesting than what the mask implies, but with no biographical information to speak of, we can only tackle the producer’s aggressive yet meticulous bass music head-on. See if you can sneak a peek behind ?Z’s gold-plated façade when he takes over, with support from Bloomington’s Shy Guy Says as well as locals Panzer! and Schyne. —Sam Benanti

An exhibition around the holidays has to do its best to capture the public’s attention. With only a few viewing days left, The Gallery on Pearl is showing us “A Handful” of artists who do just that: Mary Burnley, Ben Hammond, Bob Jones, Sebastian Moh and Nathan Newby. Burnley specializes in metal jewelry inspired by nature that really should be called small sculptural one-of-a-kind objects you can wear. Jones makes pieces such as bowls, containers and pens out of highly grained wood. Blown and kiln-worked glass balls, vases and pendants are the domain of Newby. Two of the artists in the show are ceramicists. Hammond prefers textural functional pieces in earthtone hues, while Moh’s delicate porcelain teacups, bowls and mugs resemble fine china. —Jo Anne Triplett

Aaron Coady said he was an outcast in Pittsburgh’s drag scene before he went on Logo’s “RuPaul’s Drag Race” as his stage persona, Sharon Needles. It’s easy to see why many less creative types would underestimate Needles, who stood out immediately on her season with punk/Corpse Bride styles and ideas and a wicked sense of humor to back it up. She went on to win easily, picking up fans such as Lady Gaga on the way. Now we get the full, live experience on the sickest night of the year that isn’t Halloween, a coup for the new Play nightclub in Butchertown. Three shows, every two hours, starting at 9:30, including a ball drop at midnight and a champagne toast, of course. What could be more natural? —Peter Berkowitz

In what may be the Kentuckiest of Kentucky photography shows, Wayside Expressions Gallery presents an exhibit all about those four-legged creatures racing with unbridled spirit across every state brochure. “Horsepower” features the work of Fran Troje, merging her two passions of horses and photography, and examining in particular the relationship between horses and cars. “Horses and automobiles have long occupied a central position in the American psyche, history and popular culture,” she says. “Both can symbolize strength, power and grace. Poetry in motion, if you will … If eyes are truly the windows to a soul, the deep brown iris of a thoroughbred tells us as much as the clear halogen of a headlamp. Although one is inanimate and the other is very much alive, they both reflect our own scars, desires and wishes.” For subscribers to Popular Mechanics and American Turf Monthly alike. —Jennifer Harlan

Rarely do we as fans get the pleasure of hearing a band play one of their albums in its entirety. Fortunately for us, that’s exactly what local standout black metallers Anagnorisis will be doing. They’ll play their highly acclaimed new album, Beyond All Light, from start to finish. Local filth mongers Order of Leviathan will also be present, accompanied by the grim ferocity of Esoteric Burial and newcomers Sounds of Laughter. While the show was intended as a vinyl release event for the new Anagnorisis record, a recent accident suffered by promoter Loyd Coy has turned this into a benefit show as well. So come out for an oversized helping of piercing black darkness, and also to support those who help make Louisville’s live music scene as diverse as it is. —Austin Weber

Coca-Cola pioneered the art of brand recognition — its distinctive logo has been stamped and stuck on everything from bottle openers to clocks to coolers to trucks and posters. People collect Coca-Cola memorabilia avidly and rabidly, sometimes even decorating whole rooms with the recognizable red brand. If you’re one of those people (or even if you’re just casually interested), Louisville Slugger Museum and Factory has an exhibit for you: “A Coca-Cola Christmas.” Through Jan. 6, you can view an interactive, holiday-themed collection of Coke artifacts spanning 75 years, direct from Coca-Cola’s exclusive collection. There is original artwork by Haddon Sundblom, along with a rare Coca-Cola polar bear advertisement from 1922, and much more. —Kevin Gibson

The cleverly titled exhibition “Free D” wants viewers to get away from thinking about art in dimensions of two or three. Curators Megan Kociscak and Andrew Cozzens have come to believe that “2-D and 3-D are categories that have long been used to separate works of art. The classification of art works by dimension has served many purposes. However, as artists reject traditional boundaries of art-making, this division becomes arbitrary and obsolete … ‘Free D’ features artists whose work makes visible the delusion that is the categorization of art by dimension.” The group of national and international artists thinking in or out of the box include Aio Charley from Wellington, New Zealand, Suzanne Mahoney from Boston, and Joel Fullerton from Toronto. —Jo Anne Triplett