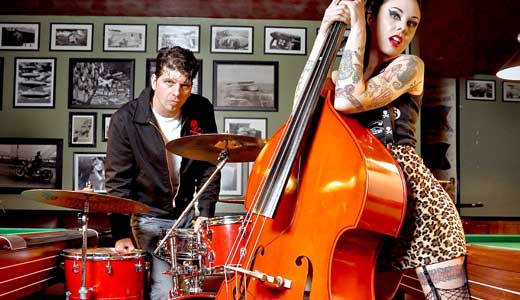 Now that the holidays are over, it’s time to get in the pit and try to love someone, and Cleveland hardcore punks Harvey Pekar are certainly up to that challenge. Harvey Pekar honor their cranky, pensive namesake, utilizing heavy riffage and frantically yelled vocals as their currency, all of which makes for an urgent, if at times surprisingly melodic affair. As part of their Road to Kat Kat Phest tour, the band are performing in support of Upward, Northward, which sees the quintet streamlining their sound for a more focused and harmonious album. Also making a trip, although this one a bit shorter, Owensboro’s Magdalena are set to perform, bringing their own unique spin on punk and emo. Representing Louisville are melodic hardcorers To Die Alone, progressive punk band Ari, and the hardcore violence of Iron Noose. The show is all ages. —Syd Bishop

It can be tough enough for the average person to follow in their father’s footsteps, so when Dad is famous and a hero to many, it gets that much tougher. You’ll never see Freddie Prinze Jr. in front of a brick wall telling jokes, but Waylon A. Jennings — better known as Shooter — took the hard road. The son of country outlaw rocker Waylon Jennings and fellow badass singer Jessi Colter, Shooter Jennings (who played with his dad in the ’90s as a teen, and plays Phoenix Hill this time with Waymore’s Outlaws, a Waylon tribute band made up of his former band members) has released a mess of records on his own. Throw away your The Band Perry CDs and get some real country tonight, straight from the tap. —Peter Berkowitz

It is a new year, and we have to assume it hasn’t been too bad yet, if you’re still alive. However, if you are among the Living Deads (we assume their fans aren’t called “Deads Heads,” yes?), it is our sincere hope you are at the Dive, rocking out and not actually a zombie wandering through downtown, searching for brains (good luck finding those downtown on a Saturday night!). From Denver, these Living Deads make a psychobilly racket louder than one couple normally makes in a decent public setting, with songs like “Hot Sick,” “Hot Rod Baby” and some other, colder offerings in their repertoire. Opener The Sharrows, from Madison, Wis., bring a more wholesome, “real America” take on country/folk/rock music to get the party started. —Peter Berkowitz

Shake off your post-holiday blues and raise some hell with six punk and metal bands. Chicago act Villains live up to their name, bringing heavy, Meshuggah-influenced grind with lots of whammy dips. Pairing well with this are Florida’s Silence and Fear the Concept, and West Virginia’s Left Behind, all self-described as metalcore and all of which deliver their own take on a genre known for low growled vocals and drop tuned guitars with an emphasis on groove. Oldham County rockers Knocked Loose offer a slightly different hardcore perspective, which sees the group a little less growly and a little more mellifluous on their vocals, albeit by comparison. And for something completely different, you can enjoy the pop-punk of Indianapolis rockers Give and Take. So get ready to get aggro this weekend and wash away that post-holiday malaise. —Syd Bishop

An Evening with ‘Downton Abbey’

What will happen to Lady Mary now that Matthew, her husband and family heir, has died? Who will Violet, the Dowager Countess, barb with next? Will Mrs. Patmore ever teach Daisy how to cook? Soon all will be answered with the return of the ever-so-juicy English aristocratic soap opera that is “Downton Abbey.” We’ve had to wait far too long to again be transported back in time, via great costumes, sets and writing, to witness the trials and tribulations of the Crawley family and their servants. The Brennan House Historic Home is a great place to be totally immersed in this period vibe, so much so that they’re hosting a Season 4 premiere party. Because of the costume contest, you’ll probably get to mingle with Carson the butler, Countess Cora and Lord Grantham. —Jo Anne Triplett

If you happen to be one of the few people who didn’t see the movie, or the sequel, it all starts out when a tough-as-nails lounge singer named Deloris Van Cartier witnesses a murder, and a government protection program hides her in a convent. Naturally, much hilarity ensues when the fast-talking, fast-living Delores shakes up the nuns and irritates the holy hell out of the Mother Superior. Ultimately, everyone learns something from each other, and they turn into one big, singing group of nuns. Part of the PNC Broadway in Louisville series, “Sister Act” truly is a hilarious and heartwarming affair. An excellent way to get back in the “habit” of going to dinner and a show now that the holiday festivities have subsided. —Sarah Duncan

Creating art is a good way to live your life, something Bernice and Benjamin Mazin knew. They also realized how important it is to give artists recognition, which led to the formation of the Mazin Annual Art Exhibition. This year’s juror is painter/gallerist Billy Hertz, who selected Nick Hartman, Katherine Knudsen and Kevin Schultz for the top honors from among the 177 works by 55 artists. Bob Lockhart, Kathleen Loomis, Susan Moffett, Devon Murphy and Jenna Richards received honorable mentions. “As a juror,” says Hertz, “one thing I have found which so far has proven to be true time after time — do not go into the judging booth with preconceived ideas of how the exhibition is going to look at the end of the selection process.” —Jo Anne Triplett

Philip Campbell stood beside the bed where his father passed, observing his body like a foreign ship, unable to identify the lifeless flesh of the man who raised him. That was last January. He writes about the moment like it was yesterday: “The idea of a true human soul was solidified for me at that moment. I have felt his presence ever since that day.” Not long before his death, Campbell was immersed in a project to build 100 “burning” boats out of wood materials. He finished the project and dedicated it to his father, Dennie, who Campbell said “finished everything he started.” The intriguing collection is now on display at Garner Narrative through the end of January, with an artist reception Friday from 6-9 p.m. Campbell’s work has been seen in galleries across the country. “100” is likely his most emotionally invested display, transpired in raw materials and completed with a burning boat tattooed to his ribs. —Lara Kinne