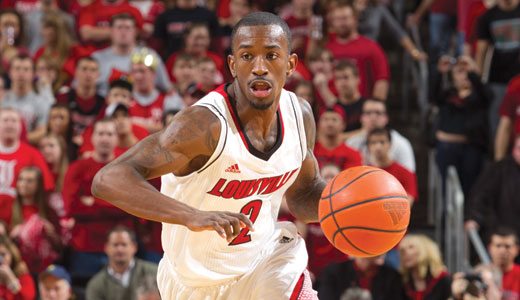 It’s December. Do you know where your basketball team is?

If your team is Louisville, you’ll find the Cardinals in Miami, taking in the rays with a little six-day working vacation in the Sunshine State.

“I think it’s going to be fun, get a little vacation — and hopefully I don’t gain any weight,” laughs guard Russ Smith, who could probably add a pound or two without being seriously slowed. “It’ll be nice for the team to get away, be around each other. I think we need to get out of Louisville, just get focused to play a tough opponent, have some days to prepare while we’re relaxing.”

Does sound fine, indeed. But the “tough opponent” Smith is talking about probably isn’t Florida International, which Louisville plays Saturday in Miami. When the Cards fly home, they’re slated for a Dec. 28 date at Kentucky.

“I feel like we can definitely improve on the defensive backboard, and obviously on outside shooting — but all of that is to come,” says Smith, a pre-season Associated Press All-American who last season helped lead Louisville to the NCAA championship. The Cards (9-1) are currently ranked No. 6 in the AP poll. “I feel like if we handle the defensive backboard and ball containment, I think we’ll be really good. It’s still early; tough to tell. We have about another month left to see where we are — amongst the country. And right now it’s early for that.”

Interesting that Smith takes such a patient perspective. But the 6-foot senior from Brooklyn is nothing if not seasoned. Once merely “Russdiculous,” a shooter who never saw a shot he shouldn’t shoot, Smith is now called by his coach the premier player in college basketball.

“It’s a biased opinion by me, but he’s made every change we’ve needed,” says Louisville coach Rick Pitino. “Two years ago we needed him to carry the team on his back. He did. Last year we needed him to take good shots. He does. So whatever you ask this young man to do, he’s an awesome talent. And I, for one, appreciate everything he does for us.”

Last Saturday, Pitino called upon Smith to switch from his regular shooting-guard spot to principal ball handler, with starting point guard Chris Smith out with a sprained wrist.

Minutes after a Louisville victory over Western Kentucky, the coach glances at a score sheet to note the result.

“He had 10 assists tonight, 14 points — he just does whatever a team needs,” says Pitino. “Two years ago, we say, ‘Russ, you’ve gotta score, man. We can’t score the ball. So you got to take over the team and score.’ Now, it’s, ‘Russ you’ve got to make the guys better.’”

It’s a role Smith seems made for. Not so much as a born teacher, or hand holder when things go wrong, but as a guy with a big smile and a comfortable way with the press and public. A self-assured guy, happy to let his self-assurance rub off on teammates.

Such as with freshman guard Terry Rozier, who started in Smith’s shooting guard slot against Western. Only Rozier missed more shots than he hit — two canned, seven clonked. Never mind that Rozier collected a team-high 10 rebounds, or that senior substitute Tim Henderson picked up the scoring slack with four three-pointers, Smith was thinking about Rozier. It is the business of shooters to shoot, and Smith didn’t want Rozier to suddenly go gun shy.

“Terry was a great scorer coming out of high school,” says Smith. “I just want him to understand it’s not all about putting the ball in the basket all the time. I told him not to let it affect him. He’s going to shoot the ball every time he’s open.”

Which Pitino sees as a good thing. “Terry needs to sit next to Russ and learn a valuable lesson,” says the coach. “Russ could care less if a shot goes in or not. He’s going to shoot a hundred. He just doesn’t care. Terry just needs to watch Russ. It doesn’t even phase Russ if he misses a shot.”

Stretching that out, one imagines Pitino hoping all his newer players catch Smith’s kind of confidence. The veterans already have it.

Junior forward Chane Behanan seems at home on any basketball court — from the friendly confines of the Yum! Center to the 2013 NCAA championship game in the Georgia Dome, played in front of an NCAA record 74,326 fans — as does forward Montrezl Harrell, who showed Syracuse how the dunk is done before 20,057 fans in Madison Square Garden.

Luke Hancock came through with his best game in Louisville’s biggest game, and the aforementioned Jones seems brimming with confidence as he takes over for graduated guard Peyton Siva. Wayne Blackshear dominated the Chicago Public League in high school, but has not been so forceful so far in college. Said another way, what Louisville is looking for is the kind of players who step into any game against anybody and just start playing.

The catch-up spot is center, where inexperienced red-shirt freshman Mangok Mathiang follows Gorgui Dieng, who last season was the top center in the Big East and is now in the NBA with the Minnesota Timberwolves. Saturday, “Mango,” as he’s called, hit all five of his shots and three of four free-throw attempts.

“A lot of people are saying I had my best game since I scored so many points, and I’m not usually a scorer,” says Mathiang. “Usually what I try to do is ‘stop’ and play defense. But it is about the situations. I’ll do what is needed.”

This observer thinks scoring might eventually be Mathiang’s top talent. Mango swings to face the basket, then drives the lane like a tall forward — with a nice right-handed shooting touch.

“It didn’t look the greatest, ducking his head, making his moves, but he was offensively aggressive,” says Pitino. “And I thought he tried to block shots.”

Indeed, Pitino has placed a premium on blocking shots, with college rules changing this year to allow offensive players more freedom of movement. Previously, defenders stepped into the paths of opponents to bust up plays. Establish your ground and drop a hip on them. Graze ’em with an elbow. Now, Pitino says, defenders should stand back and sky.

Veteran U of L fans might hearken back to coach Denny Crum’s championship teams to recall that sort of shot blocking. Guys like Pervis Ellison and Derek Smith didn’t clobber anybody. When opponents came to the basket, they simply rejected their shots. Louisville’s tall guards also blocked shots — often from behind — to ruin opponent’s fast breaks, and maybe begin one going the other way. Be nice to see all that again.

Pitino is all about such boldness.

“The reason we’re not as good, or near, last year’s team, is we could gamble more last year,” says Pitino. “It was just very easy, with Peyton and Gorgui, to erase defensive mistakes. If somebody got beat, Peyton would fly over like a buzz and erase the mistake by getting in front and helping out his teammate. Then Gorgui was back there erasing with his shot-blocking.

“If this was our team entering March,” Pitino adds, “we’d probably have an early exit from the tournament. But I think you’d see that with a lot of teams.”

“The personality is great,” says Smith. “Guys are really funny, cool. Everybody gets along, and that’s what you want. I’ve been grateful to be on teams like that my whole career here. It’s unfortunate that other teams go through some issues in the locker room, but we’re not one of those kind of teams.”

So Pitino has his funny, cool guys in Florida, training in December for the showdowns of February and March — like his racehorses, if you will, prepping at Gulfstream and Santa Anita.

“We were a very smart basketball team last year,” says Pitino. “When you watched us down the stretch, you could tell — the way they passed the ball and played defense. (With this team) we replaced a bunch of guys who were seasoned veterans, and I think when the mental aspects catch up to the physical, we’ll be a much better basketball team.”