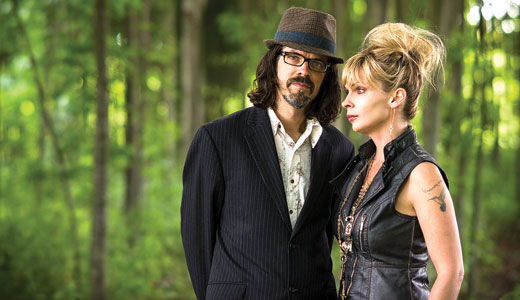 Based around the married couple of Karin Bergquist and Linford Detweiler, the folk-pop band Over the Rhine has been together long enough to build a fan base strong enough to support their own label, Great Speckled Dog, enabling them to survive and thrive outside of the system. While they have released two Christmas albums, the band’s current tour supports their new double album, Meet Me at the End of the World, which is their second album produced by Joe Henry (who recruited Bergquist to act with him in the Louisville-shot movie “Pleased to Meet Me”).

LEO: You’ve had 20 years of making songs together. How do you still have so many songs on one record?

Linford Detweiler: We both write. Karin likes to say it was easier just to put all the songs on the project, rather than arguing over whose got left off. Maybe there’s some truth to that. But actually, we knew we had a good number of songs that loosely revolved around the little hideaway farm in southern Ohio that we’ve called home for the last nine years. We wanted to collect this particular song cycle onto one project, if possible, and we needed a little extra musical real estate for that to happen. We weren’t married to the idea of a double album, but it sort of fell into place in real time.

LEO: How does the environment around your home influence your songs? Do you see a squirrel and get inspired, or is it more abstract?

LD: We haven’t written a song called “Squirrel!!” yet. But it’s a song that definitely seems to play in our dogs’ jukebox …

When we moved out here to this pre-Civil War farmhouse and this particular piece of land, we realized we didn’t know the names of much of anything — the trees, the songbirds, the weeds, the wildflowers. My father helped us fill in a few gaps before he died — he was always a bit of a birdwatcher and knew his trees. He said he heard birds out here he hadn’t heard since he was a boy growing up on his family farm in the 1930s — bobwhite quail, indigo buntings, bluebirds, killdeer … After he was no longer around to do the naming for us, we began to do the work of calling things by name, and they began to appear in our songs.

Naming is an act of respect, and love, and I think when we began affording our surroundings our careful attention, this place became our home. We had never written an album about home before. As we were fixing this place up, my father also encouraged us to “leave the edges wild,” and that became an important metaphor for us. That line found its way into several of the songs on the project.

LEO: What’s your relationship with Cincinnati like these days, especially now that you’ve moved farther out?

LD: We still do all our business in Cincinnati and have lots of friends who live there. Our three godchildren live in Cincinnati. And we still feel drawn to the neighborhood of Over the Rhine. Maybe someday we’ll have a little crash pad back in the neighborhood. It’s still the old Ohio River town that very much feels like the birthplace of the band.

LEO: Now that you — we — are all older than we were 20 years ago, does “maturity” sound more like a compliment if someone describes you or your music that way? Do you feel any older inside? Do you still get excited about making the next record or setting out on the next tour?

LD: We’ve been having more fun on this recent “Meet Me at the Edge of the World Tour” than we’ve probably had ever. I think we’re probably a little less conflicted at this point in our lives. We’ve embraced a calling. We know we’ll probably never be famous in a pop-culture sense, and that’s probably a really good thing. Hopefully, the work will speak for itself and continue to find a growing audience that’s real. And we’re crazy enough to believe that we’re still growing as writers. If we didn’t believe a record contained our best work, we wouldn’t put it out.

We’d like to think that some things get better with a little age. Good wine, good songs, good friendships … We’re in it for the long haul.

Over the Rhine with Matt the Electrician
Friday, Dec. 13
Kentucky Center for the Arts
501 W. Main St.
kentuckycenter.org
$25; 8 p.m.