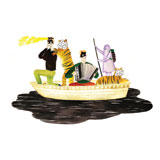 Man Man shouldn’t still be alive. This batshit crazy circus began making Swordfishtrombones for Generation Y almost a decade ago. The rickety fun of their albums and shows seemed like a band member would very likely end up dead, and/or Man Man would simply implode from the intensity of it all. So, against all odds, their fifth full-length, On Oni Pond, arrives. The fact that Man Man makes no attempt to be the yowling hipster junkyard band of yore should be applauded. On Oni Pond retains that Waitsian vibe, though now softened by a group of 30-somethings getting to bed on time. This is not your PBR-swilling Man Man; it is Man Man for the daycare carpool lane, which isn’t necessarily a bad thing — just not the turn this clattering gang of misfits seemed destined for.