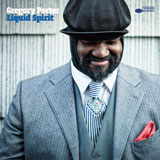 If you’re a jazz fan and haven’t heard of Gregory Porter, then do yourself a favor and check him out. Actually, you don’t need to be a jazz aficionado; Porter’s influences also include R&B and intelligent pop. This singer is getting lots of press, but it’s because he’s for real, not the latest product of “the star maker machinery.” Liquid Spirit, his Blue Note debut, is his third album. All but three of the 14 songs are originals, showcasing his deep, rich voice with a lyrical range from love songs to political commentary, demonstrating a poetic feel. He feels like a 21st-century, healthy Gil Scott-Heron, wedding intimate delivery with graceful power and insight. He didn’t release his first album until he was 39; better late than never, Porter’s star is still on the rise.