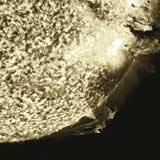 Roly Porter is best known as half of the dubstep duo Vex’d, but that is about to change. Since Vex’d went on an indefinite hiatus in 2010, Porter has been making a name for himself with a turn toward the avant-garde, starting with his static-worshipping, percussionless debut Aftertime, which sounded like a science-fiction film soundtrack subjected to electroshock torture. On his sophomore record, Life Cycle of a Massive Star, a Wagnerian take on ambient music, he works the sonic material of his previous release into a concept album detailing exactly what is suggested by its title: the birth, life and eventual supernova of a star, told in five breathtaking acts. Closer “Giant” is illustrative: Opening with gentle string harmonies and what sounds like highly processed vocals, it eventually explodes in a climax of overwhelming yet gorgeous distortion.