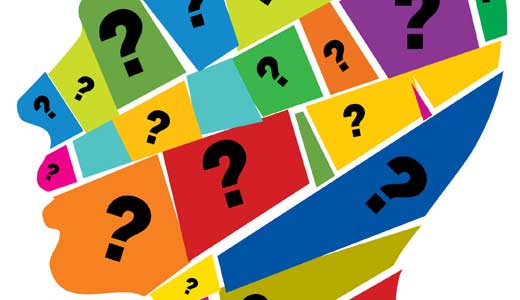 “Only a good-for-nothing is not interested in his past.” —Sigmund Freud, the father of psychoanalysis

And so another crazy year has come and gone, full of delightful surprises. We had Google glasses, Amazon drones and a pope who speaks the words of Christ. Nobody saw that coming!

But big data was the big story in 2013. If we weren’t all gleefully handing it over to the social networks, we were innocently having it sucked out of our heads by the NSA and our corporate overlords. And thanks to a steady stream of surveillance disclosures, it’s become clear Uncle Sam is keeping close tabs on all of us. (Your government would appreciate a courtesy flush, BTW.)

Back in 2002 when Dick Cheney spoke about “total information awareness,” the very notion seemed comical. But this year when German chancellor Angela Merkel told President Obama to stop listening in on her phone calls, the nation gasped. Because, you know, who makes phone calls anymore, right?

Of course, there were a lot of other important events in 2013, but most of them involved either Obamacare or Miley Cyrus, neither of which anybody thinks can be fixed. Oh, and there were some important basketball games back in the spring.

So how well were you paying attention? Take our 2013 quiz and find out what the NSA probably already knows about you. Oh, and to really challenge the ol’ memory banks, we’re tossing in a few questions from the past decade in honor of this, the 10th anniversary of our not-Good-For-Nothing Quiz. Good luck and remember: The NSA will know if you ask Siri for help! And it will go on your permanent record.

1. Despite President Obama’s assurances that the government does not spy on its citizens, what did NSA director Keith Alexander admit in September?

___A. That 83 percent of active Facebook users are “total narcissist drama queens”

___B. That the NSA collects and stores phone records for all U.S. citizens at a massive data center in Utah

___C. That you really ought to get that mole checked out

___D. That “sandwich” is the most common euphemism for “weed” when people text their dealers

2. Who said, “I made a decision … that I would not marry anybody until I could marry everybody”?

___A. Joe Biden, in a misguided joke about loving the American people

3. What is “synthetic biology”?

___A. A musical subgenre of Christian slash-metal popular in the clubs of Toronto

___B. A potent painkiller responsible for 40 deaths in Kentucky in 2013

A. Former CIA and NSA contractor who fled to Russia and leaked secrets about the United States’ massive surveillance program

B. Founder of 23andMe, a DNA testing service that will analyze your spit and tell you your personal genome

C. Physicist who won the Nobel Prize for discovering the “God Particle”

D. Geneticist whose book “Life at the Speed of Light” detailed his plans to build a DNA machine to send life through space

10. What was the Oxford English Dictionary’s 2013 word of the year?

11. Which of the following did Sen. Rand Paul not do at an April speech at Howard University?

___B. Claim he was never opposed to the Civil Rights Act, despite being on record opposing it

___C. Suggest he was brave for appearing before an audience of black people

___D. Claim he used Afro Sheen on his hair throughout the ’70s

Match the political action committee with its purpose:

B. Super PAC established by Jonathan Soros to oppose SuperPACs

Match the kooky billionaire with his eccentric, long-shot side project:

A. Pneumatic-tube-like high-speed travel for humans known as the “hyperloop”

B. A better toilet

23. House republicans shut down the U.S. government for 16 days in October in a failed attempt at what legal action?

___A. A ban on combat drones on American soil

___B. A proposal to defund the Patient Protection and Affordable Care Act

___D. A plan to stop a proposed ban on trans fats

24. What unusual tactic did the U.S. and Russia employ to convince Syria to surrender its chemical weapons?

___B. The “Vozglas Zadnitsu” policy, which is Russian for “open up a half-liter of whoop-ass”

___C. An around-the-clock broadcast of Miley Cyrus’ “Wrecking Ball” video to all homes in Syria

___D. Two weeks of drone strikes in Damascus, resulting in the deaths of 238 civilians

25. Catherine, Duchess of Cambridge, gave birth to a baby boy in July who is now third in line to the British throne. What is his official name?

___A. Prince William, Duke of Wellington

___B. Baron Carrickfergus Willie John-Thomas Percy, Royal Knight Companion of the Most Ancient and Most Noble Order of the Areola, Dangler of the One-Eyed Trouser Serpent, His Royal Majesty, Prince Dave

26. Quiz Flashback — 2006 — Which of the following is not a euphemism used by the Bush Administration?

___A. “Sectarian violence” for civil war

___D. “An honest accident” for getting drunk and shooting a friend in the face

27. What is the Bluegrass Pipeline?

___A. A marijuana-trafficking syndicate operating out of Marion, Nelson and Washington counties

___B. A controversial plan to pump fracked gas through Kentucky on its way from the northeast to the Gulf of Mexico

28. In an infamous, secretly recorded meeting, what popular arcade game did Mitch McConnell compare his campaign to?

___A. “Gridlock Guardian II: A Nation in Decline”

29. In May, 16,000 people packed the Yum! Center to hear the Dalai Lama speak, in association with what Louisville designation?

30. Sen. Rand Paul spent much of the fall apologizing for a repeated pattern of plagiarism in his speeches, articles and his book. What original sources did he plagiarize?

___A. Ayn Rand’s “Atlas Shrugged,” Walt Whitman’s “Leaves of Grass” and Howard Zinn’s “A People’s History of the United States”

___C. The Heritage Foundation, The Week Magazine and Wikipedia

31. What did officials ban from the Big Four Pedestrian Bridge in April?

32. Kentucky got a lot of good national press in 2013 for being a leader in what important social reforms?

___C. Legalization of dueling and plagiarism in the political arena

___A. Comprehensive educational attainment is elusive because “the smart ones move out of state”

___B. There is “no evidence that burning coal causes global warming”

___C. The “safety and security of the commonwealth cannot be achieved apart from reliance upon Almighty God”

___D. That they would “totally blow John Calipari if he would only ask”

34. WAVE-3 Bubblepooper Eric Flack set the Twitterscape on fire in July with what controversial report?

___A. A study showing that UK basketball fans have extremely elevated levels of halitosis

___B. An introspective, emotional, on-air breakdown after admitting he frequently tries but never actually poops bubbles

___C. An out-of-context report claiming that food trucks are unsanitary

___D. A libelous claim that Tom+Chee is neither Tom nor Chee

35. A year after raiding The Courier-Journal’s sports department, WDRB snuck back in and pilfered news reporters Marcus Green and Jason Riley. What do they do for WDRB?

___B. Live television reports connecting the dots between food trucks and diarrhea

36. After a long period of painful decline in advertising and readership, The Courier-Journal announced what change in October?

___A. It was switching to an all-college-basketball format

___B. It would merge the Metro and Business sections into the front section and publish fewer editorials

___C. It would cease publication on Tuesdays and Saturdays

___D. It was enjoying record profits thanks to the tweets of Sheldon Shafer

37. Louisville Public Media hired several former print journalists to provide long-form reporting “to expose wrongdoing and increase transparency in the public and private sectors.” What is this new venture’s name?

38. Quiz Flashback — 2007 — What technological innovation had fans hailing it as a “social sixth sense” and critics denouncing it as “hipster narcissism” and “pointless email on steroids”?

___B. The exploding popularity of cell-phone text messaging

___C. The mass migration of Myspace users to Facebook

___D. The “CrackBerry” and other addictive messaging devices

___E. Twitter.com, a service that lets users post frequent short messages about what they’re doing at the moment

___A. Jon Stewart, defending comedian John Oliver, who hosted “The Daily Show” while Stewart was off making a movie

52. The Speed Museum closed in June for three years for a major renovation and expansion, but opened a satellite space on Market Street. What is its name?

53. How did recording artist Robin Thicke explain to the BBC his smash single “Blurred Lines,” which celebrates date rape and is truly one of the worst monstrosities in the history of mankind?

___B. Disgraced former Congressman/sleazeball Tom Delay, during an apology for doing the pelvic thrust on an episode of “Dancing with the Stars”

___C. David Letterman, during a humorous albeit painful on-air apology for having sex with members of his “Late Show” staff

___D. David Letterman, during a humorous albeit painful on-air apology for a joke about Sarah Palin’s daughter getting “knocked up” by New York Yankee Alex Rodriguez

___A. Became the first Scottish man to endure the treacle-leather-and-soot gauntlet totally naked since Aiden-in-Tartan in 1433

___B. Became the first golfer to win the U.S. and British Opens since Bobby Jones in 1930

___C. Became the first British man to win Wimbledon since 1936

Match the newsmaker with the news:

A. Football star tricked into an online relationship with a non-existent woman

B. St. Louis pinch runner picked off by Red Sox pitcher Koji Uehara — the only time in World Series history a game has ended on a pickoff play

C. University of Louisville basketball star who led the Cards to the NCAA Championship final

61. New York Yankee Alex Rodriguez was suspended for all of the 2014 baseball season (pending appeal) for using what banned substances?

___A. Deer antler velvet and ephedrine

___B. Human growth hormone and testosterone

62. In a February basketball game in South Bend, the eventual 2013 NCAA champion Louisville Cardinals lost to Notre Dame in a game that was memorable for what reason?

___A. The five-overtime game was the longest in Big East regular season history

___C. An image of God appeared on the Jumbotron at the end of the game and exclaimed, “This is MY house, bitches!”

___D. ESPN commentator Dick Vitale spontaneously combusted, causing a 27-minute delay of the game while officials cleaned up the floor

63. Quiz Flashback — 2008 — During halftime at a Freedom Hall “white-out” game against Georgetown, why did University of Louisville basketball coach Rick Pitino change out of a white linen suit into a more customary black one?

___A. A cease-and-desist lawsuit from the es tate of Colonel Sanders

___B. His perspiration caused his blue underwear to bleed through, making him “look ridiculous”

___C. By wearing white and black in different halves, he wanted to “make a statement about ‘post-racial’ America”

OFFICIAL RULES
1. Submit entries to LEO Weekly, 301 E. Main St., Suite 201, Louisville, Ky., 40202, by 5 p.m. on Friday, Jan. 10. You may also email entries to [email protected]
2. Only one answer per question, one submission per person.
3. Entries must include participant’s name, address, email address and daytime phone number.
4. LEO Weekly is not responsible for entries that are late, misdirected or otherwise fouled up, including any befouled by computer or network malfunctions, congestion or lethargy. Such entries will not count.
5. The top three winners and quiz answers will be published in the Jan. 15 issue and at leoweekly.com.
6. No Googling.