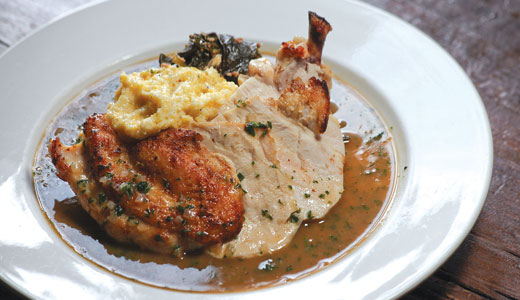 Ah, Germantown, that lovable little urban neighborhood. Who can drive, stroll or bike through its tidy streets of shotgun houses and sturdy brick storefronts without feeling connected with our city’s German heritage?

Don’t look too closely, though. Back in the day — way back in the day, the 1840s — a tide of German immigrants (and, a bit later, their Irish cousins) washed over Louisville, whose earlier first families, established and conservative folks of English stock, didn’t particularly welcome them.

The Germans ate funny food that reeked of cabbage. They drank beer, for God’s sake. And they spoke an odd, guttural language. What’s more, they were Catholic, and as refugees from Old Europe’s wars and kings, they were thought politically radical.

Many of them settled in Butchertown, where on one of the city’s darkest days, “Bloody Monday” on Aug. 6, 1855, nativist Know-Nothing Party crowds celebrated a hot gubernatorial election by rioting, beating up German and Irish immigrants and setting fire to their houses, outraged by their audacity at planning to vote for the wrong guy.

It’s no surprise the Germans soon decided to settle in a new neighborhood a bit farther southeast, where they could mind their own business. Never mind if it was so swampy and dank that people called the area “Frogtown,” it was their own.

It’s worth thinking about all this the next time you settle down in the amiable precincts of Eiderdown, or many of its Germantown neighbors.

These friendly confines feel as if they’ve been around forever. The neighborhood is more trendy now, and more diverse. But listen, and I’m pretty sure you can still hear the voices of the old Germans. They’re probably saying, “Ach, ya! Get the duuuck faaat popcooorn.”

Now, in fairness, Eiderdown’s management makes one thing perfectly clear: “Eiderdown is not a German restaurant,” its webpage insists in all-caps type. “‘German food’ is one of our many inspirations, but not the sole basis of what we do.”

All right, Eiderdown, we’ll bite. What do you do? Wait for it: “Categorize us any way you like; European-inspired Southern food is what we had in mind.”

Personally, I’d define Eiderdown’s fare pretty much as I’d define Germantown itself: American, indebted to Louisville’s assimilated German heritage. Expect dishes made with quality, local meats and produce, accented with the “country” cookery brought by Louisville’s other immigrants — the rural Kentuckians and Hoosiers who’ve made the city their home.

This menu changes frequently to mark the seasons, but generally includes a dozen entrees, burgers and sandwiches. Main-dish meals range from the middle teens to the lower $20s. Apps and salads are reliably under $10.

And, of course, there’s beer. The amiable, 10-seat bar that lines one side of the narrow brick room features an imposing rank of 21 draft-beer taps. There’s also a short but well-chosen international wine list.

The Germans are right: Get the popcorn ($4). A big portion of fresh, hot popped corn gains gravitas from a gourmet-style drizzle of duck fat. You’ll never crave movie-house “butter” again. Spinach salad ($9), a thoughtful creation of spinach and endive with apples, goat cheese and hazelnuts, also turned to aromatic duck fat for its warm vinaigrette.

Three fat, soft pretzel sticks ($5) made another fine if filling starter, with a choice of two mustards. (We chose mild Ale 8 and piquant sweet-hot.) The soup ($6) was a thick, comforting and seductively creamy bisque of beets and mushrooms. The option changes often. I recommend getting this one while it lasts.

The Sunday Sitdown entree ($18) starts with an airline breast of locavore (Barr Farm) chicken cut in thick boneless slabs. It’s plated with rich grits enhanced with heavy cream and a side of collards with sausage that seemed unexpectedly sweet.

Lisa’s Lucid Dreaming ($16) was an amazing plant-based entree, beautiful to the eye and palate. A block of potato pave, a rich block of thin-sliced potatoes baked with heavy cream, was accompanied by wedges of beautifully roasted beets, thin-sliced oyster mushrooms and thick butternut squash mousse, all plated on a subtle sherry cream.

The fish dinner of the day ($25), a firm serving of Scottish salmon the size of a poker deck, was arranged with wilted spinach, cauliflower florets and fingerling potatoes on a plate painted with pale-pink carrot cream sauce.

Dinner for two, with two apps, a salad, two mains and a dessert plus a couple pints of draft beer, came to $72.08, with a $15 tip for friendly, flawless service.

Dine Out for Life today

Here is a great offer that gives us a great excuse to get out, dine and help a fine local organization by doing so. You’ll need to jump on it, though: Dining Out for Life is today! All day, 43 locally owned Louisville and Southern Indiana restaurants have pledged a portion of their proceeds for the day to House of Ruth, a nonprofit organization serving Louisville-area folks living with or affected by HIV and AIDS. To get a complete list of participating restaurants, click diningoutforlife.com/louisville/restaurants. For more about House of Ruth, visit houseofruth.net.