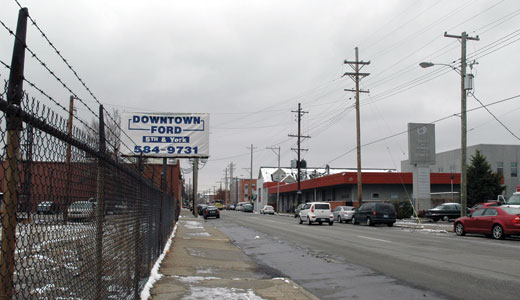 Every spring, a lonely little parade traverses down Third and Fourth streets in the downtown Louisville neighborhood just south of Broadway. Unlike more high-profile shindigs like the Pegasus or St. Patrick’s Day parades, the streets aren’t lined with eager kids and patient parents waiting for floats. In fact, usually, the foot traffic is identical to what it would be on any other weekday — a few office workers strolling off to pick up lunch, some nearby residents walking to the bus stop or library, the occasional customer to one of the businesses tucked away in old buildings with long histories.

Brent Collins, a marketing manager at Luckett & Farley, which is located right along the minute march’s route, for years never knew when the parade was coming, or why it was being held, or even who held it. He had a guess, but nothing concrete. Louisville lifers in his office were similarly stumped. What Collins did know is that few things are sadder than a parade with no audience. Those wrapped Smarties candies left strewn across the sidewalk said a lot about this neighborhood, and none of it was good.

In a city that often celebrates its neighborhoods, Luckett & Farley might as well be in no man’s land. The term “SoBro,” meaning “south of Broadway,” has existed for years, but few use or take ownership of the term. Generally speaking, the neighborhood runs from Broadway to Kentucky Avenue and from I-65 to Seventh or Eighth streets, though those borders stretch and squiggle depending on who’s doing the talking. SoBro is an asphalt sea where paid parking lots make up somewhere around 45 percent of space, broken up only by a mess of one-way streets designed to funnel people away from the neighborhood as quickly as possible. It unceremoniously fills the gap between downtown proper and the historic districts of Old Louisville and Limerick.

But it could be so much more.

That’s the feeling Collins had after the most recent parade, anyway, and his suspicion isn’t unique. It largely echoes the sentiments of a report released early in 2013 by the Urban Land Institute, which harshly classified SoBro as having an “absence of quality” but identified potential building blocks for creating a solid identity. Those building blocks involved academic institutions and their affiliates, such as Spalding University, Presentation Academy, Louisville Free Public Library and the Kentucky School of the Arts, all of which are located within SoBro. The focus of that Mayor Fischer-pushed report was establishing a “Fourth Street corridor” that seamlessly stitches together everything between Waterfront Park through Churchill Downs to the Fair & Expo Center and Airport, and it got Collins wondering what the people already living or working in SoBro thought of their neighborhood’s identity and potential.

To find out, he scheduled an open meeting in mid-November for all the identified SoBro stakeholders he could find. He prepared a presentation about the ULI report and his own thoughts on a roadmap to real change. He tapered his expectations, but more than 30 people showed up. They included small business owners, urban planners with the city, representatives of Council members, and employees of the local educational institutions and nonprofits based in the neighborhood.

Collins never got to the end of the presentation. Turns out, he didn’t need to sell the idea of investing in SoBro. Everyone was already on board and intrigued by the idea of utilizing collective energy rather than skating by on the individual efforts many of them are already attempting.

Spalding University and the Kentucky School of Art each have expansion goals, which could raise demand for student housing options. Jefferson Community and Technical College is currently expanding across Broadway into SoBro, though, ironically, their immediate need is for parking spaces. Could the identity of the neighborhood be centered on furthering education or up-and-coming artists?

Earlier this year, Louisville Metro beefed up bicycle infrastructure throughout the greater downtown area. One group is working on establishing “idle free” workplaces and neighborhoods. Could the future be in sustainability? Might the best course of action be pushing for better alleyways and connectors between campuses?

Several nonprofit organizations have roots in the area, including the Center for Nonprofit Excellence and the Center for Women & Families. What role might they have in defining the neighborhood? And how do you drive business without gentrifying and pushing out the low-income individuals currently living in the area?

Inevitably, there are more questions than answers right now, but Collins sees that as a good thing. It confirms interest. What he doesn’t want is a third-party investor coming in and developing something groundbreaking that defines the neighborhood. While that might end up benefiting everyone, he thinks the better option is to grow the neighborhood organically from what’s already there.

Knowing there isn’t yet a Gill Holland-type developer committed to re-envisioning SoBro, Collins sees this new ragtag group utilizing low-cost, high-reward opportunities to publicize the SoBro name and build buzz as they establish an official neighborhood association. He’s hoping one of the concrete kings of the neighborhood will step up and host a tournament in the spring for the Louisville Hardcourt Bike Polo Club, which he connected with after hearing about their lack of a permanent playing space.

“We’re not changing the world with anything tonight,” Collins says to the group, “but it’s a start.”

A neighborhood association for NuLu existed for a full decade before the boom finally arrived there. Nobody involved with SoBro wants to wait that long, but they’re also committed to shaping it correctly. Despite the similarly structured name, nobody at the SoBro meeting seems interested in having a new row of trendy bars and restaurants sitting across from the Catholic high school or next to the section 8 homes for struggling families.

So, that parade. It was Spalding’s. Every year, the university hosts a Running of the Rodents, which is literally a rat race, surrounded by a week of rat-themed events meant to relax stressed-out students before their spring exams. One of the events is a parade. This year’s theme was “Three Musketeers,” and the year prior was “Viva Rat Vegas.”

Now that Collins figured that mystery out, he is onto learning new things. Since the meeting, he’s met one on one with individuals about their projects, goals and potential partnerships. He’s started doing lunchtime walking tours of the heart of SoBro to people willing to slow down and see the neighborhood for what it is — good and bad, boring and interesting.

“There are issues to address,” he concedes. (Indeed, after the successful meeting of SoBro stakeholders, one attendee went to her car and found it had been broken into.) “There are a lot of fragmented plans. We need a united front.”