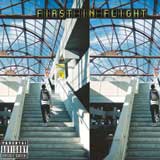 From some place called Horse Cave, Ky., now-Louisville resident Taylor Rogers teams up with producer Ju$t Cobain. Jalin Roze looms large over First, beyond his feature on “Lane Switchin’.” Roze’s influence (along with Curren$y and the A$AP mob) is obvious, his Grand National Dreams the blueprint. Taylor and Ju$t sound great together, though Ju$t should leave the rapping to professionals. Outside of that lone verse, First plays like a label release, shockingly high quality from start to finish. The requisite money, fashion and ladies topics are handled deftly (“I Know You Know,” “Girl-Fun with You”), while higher concepts work just as well (the two-part “Ciel — L’Enfer” is more than worth the ticket price). In a year where most Louisville emcees have taken a bye, Taylor Rogers has stepped in late with one of 2013’s best.