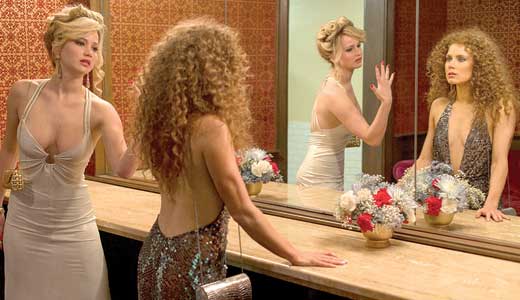 “In order for this con to work, he’s got to be blown away. He’s got to feel like he’s in over his head,” says Christian Bale early in “American Hustle.” While Bale’s character — schlubby, pot-bellied con man Irving Rosenfeld — is talking about scamming the mayor of Camden, N.J., he is also talking about the audience. And that, right there, is where “American Hustle” shines.

Director David O. Russell’s con-man flick drops the viewers deeply in over their heads, and the results make us feel as if we are perhaps the ones being conned — always the fingerprint of a perfect scam story, like “The Usual Suspects” or “Ocean’s Eleven.” The lush ’70s setting primarily overwhelms us: Russell sets the movie in the pastel tones of the era, creating a fun environment for the characters to run loose. “American Hustle” glitters with clash-tastic disco fashion, antique technology and Amy Adams’ ridiculous cleavage.

Then the Rube Goldberg plot overwhelms us. Adams and Bale play small-time grifters who are running a loan shark scam … until FBI agent Bradley Cooper nabs them. Instead of tossing them in jail, Cooper cons the con men into using their skills to trap much bigger fish. Eventually, the stakes are raised to include the many pockets lined to revitalize Atlantic City, from mayors to congressmen and even the biggest mafia boss of the era. But — as is the beauty of confidence man stories — there are also several scams happening right before our eyes, involving a love triangle between Cooper, Adams and Bale, the FBI’s missing $2 million, and the fate of Bale’s fractured family.

Ultimately, it is Bale’s performance that overwhelms and delightfully gets the audience in over its head. While he already has an Academy Award for supporting actor (for Russell’s “The Fighter”), it will be shocking if he doesn’t walk away with one for lead actor following “Hustle.” His physical transformation into an overweight cheese ball with a taxidermied comb-over is astonishing. But the heart Bale breathes into this lowlife is the film’s core. His Rosenfeld is confident, vulnerable, crafty, big-hearted and real. It’s a testament to Bale’s power that you simply forget this isn’t an actual person onscreen. That’s a rare result in Hollywood, and one to be savored. Bale’s transformation is the high point of the film.

There is little to dislike about this picture; even an uncredited cameo by Robert DeNiro finds him regaining a little of the intimidating punch we all used to love. When the dust settles, “American Hustle” is a sharp look at ambition. Everything the movie attempts to do is ambitious on a massive scale and, within that, the characters’ ambitions create a shared disaster that threatens everyone else. “American Hustle” is far and away the most fun and buzz-worthy film of this round of Christmas blockbusters, which is saying a lot, since this has been a red-carpet season for entertaining movies. You will be in over your head the entire time, and grateful to be conned.