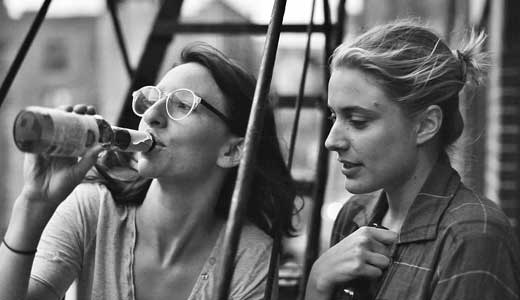 Director Noah Baumbach (“The Squid and the Whale,” “Greenberg”) is the master of cinematic seasickness. And I hate him for it.

Baumbach is to domestic discomfort what Wes Anderson is to whimsy. To be honest, “Frances Ha” is the first Baumbach film I’ve ever finished. Normally, I run in the opposite direction, because I am afraid I will end up gulping sleeping pills and vodka if I watch the whole thing. The guy is a magician of bad vibes. Teasing that kind of reaction out of viewers is undoubtedly the sign of a muscular directing mind, but it does not exactly make for an enjoyable way to spend two hours.

So, it came as a shock that I not only finished “Frances Ha,” but also loved it. (It technically came out in 2012 but didn’t make its way to Louisville till this summer.) What makes this movie my favorite of the year is that instead of watching Baumbach push the accelerator of misery to the floor, he eases up on the gas and uses his talents to usher the audience in a dozen emotional directions. There’s happiness and pity and pride and all sorts of other warm-blooded feelings one gets instead of, you know, just depression.

Shot in a black-and-white jump-cut homage to French New Wave films, “Frances Ha” details 27-year-old Frances’ many failures trying to survive in New York as a dancer. Frances is pretty and quirky and socially awkward, so the film scores big points by sidestepping the Zooey Deschanel dream-nerd trajectory for something much more honest. Frances is that little sister who never remembers to clean her room; she is your college friend who can’t scrape together rent; she is any one of us at our most frazzled and imperfect.

Baumbach quickly establishes one of the most lovable cinematic friendships in recent memory with Frances and her roommate, Sophie. When Sophie decides to grow up and move in with her boyfriend, we feel just as abandoned as Frances. The film’s namesake and her mental stability begin spiraling downward after Sophie packs up and Frances, coincidentally, loses her job. A lesser filmmaker would send Frances into soap-opera territory. Instead, Baumbach plucks the perfect notes, even when he dives back into his customary wheelhouse of discomfort. Frances runs through a series of couch-surfing episodes, poor decisions and a deteriorating sense of self that smacks bottom with her working as a dormitory RA. “Frances Ha” predictably pulls out of its nosedive, but, again, in a satisfying way.

Seeing Baumbach embrace the emotional color wheel at his disposal feels like seeing this filmmaker come of age, even though he’s been making movies for almost two decades. “Frances Ha” is beautifully shot, touching and honest in all the right ways. It pulls off the difficult trick of combining those high-minded qualities into a film that is still enjoyable to watch. Baumbach has matured, much the same way Woody Allen did in the ’70s. Much like Allen, Baumbach has remarkably gone from a one-trick cinematic pony to a director stretching himself to connect with viewers — even viewers who may have found his work nauseating in the past. Maybe, especially, those viewers.