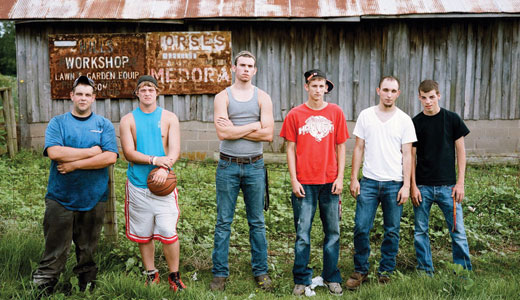 On Nov. 28, 2009, The New York Times printed a 1,370-word article that left many people in Medora, Ind., seeing red. While the article was factual, occupants of the town about 60 miles north of Louisville felt the writer only focused on the negative aspects of the town of fewer than 700 residents.

Like a high school basketball team that had an 0-22 record the previous season.

A year later, two outsiders originally from Michigan, Andrew Cohn and Davy Rothbart, would win over the school’s administration and the people of Medora. The filmmakers got permission two weeks before the high school’s 2010-11 basketball season and were so in love with the opportunity to do a documentary, they were willing to finance it themselves. They borrowed cameras and equipment from associate producer David Yosha of Magnet Films in Indianapolis and shared two motel rooms in nearby Seymour, Ind., with friends and fellow filmmakers over the next six or seven months.

The resulting film, “Medora,” focuses on the personal stories of a handful of the basketball players at a school of about 70 students. Audiences see players interact with coaches at practice, deal with tough losses in the locker room after close and not-so-close games, and, in one student’s case, get kicked off the team for missing practice. The film also shows how students face various challenges at home: one must choose whether to work on the family farm after graduation or leave town to attend technical school, while another recently returned to high school after working at a fast-food restaurant to support himself.

“People are really eager to tell their stories,” says Rothbart. “You’d think it would be intrusive to ask someone to reveal the most personal details of his life. But if you show curiosity, compassion — that helps. The kids and their families opened their lives and trusted us to tell their stories respectfully.”

While Cohn and Rothbart weren’t actively looking for a documentary subject four years ago, a day or two after reading The New York Times article, Cohn, who was spending Thanksgiving with his mom in Indianapolis, and Rothbart, who was living in Michigan, traveled together to Medora.

The school’s athletic director at the time of the article and in the film, Dennis Pace, met with Rothbart and Cohn during that first visit. After that, even though Cohn was living in California, he followed the team online. When Cohn was in Indianapolis to visit his mom, he’d travel to Medora to see a game.

Ultimately, Pace and Medora Community Schools Corp. Superintendent John Reed gave the filmmakers their blessing. Pace also told the students ahead of time that the season would be filmed.

While this is Rothbart and Cohn’s first feature film, they are no strangers to storytelling. The two have known each other for many years, working together on FOUND magazine — a zine-style publication devoted to found notes and artifacts — and its ancillary projects, including books and stage productions. In addition, Cohn directed a documentary short in 2009, “Dynamic Tom”; Rothbart writes for national magazines and is a frequent contributor to public radio’s “This American Life.”

During filming, they had a blueprint based on their storytelling backgrounds and other documentaries. They were also careful as to how they portrayed the issue of poverty, a common thread for some of the students they followed in a town that used to have two factories and now has little to no job prospects.

“There are trailer parks, but it’s about more than just that,” says Cohn. “They’re struggling with the same things people in small towns struggle with, but their courage and their hard work, their positivity in the face of their significant challenges, it’s inspiring.”

Outside of Medora, the film has received national attention. While still in production, a friend who works for Stanley Tucci and Steve Buscemi helped get them and others — Wren Arthur, Michael Clark, Tim Foley and Alex Turtletaub — signed on as executive producers. Buscemi even helped choose the opening scene.

The film has also screened at a dozen film festivals this year. Following its first screening — at South by Southwest in Austin — Independent Lens picked it up and will show it on PBS next spring. The film has been screened around the country since Nov. 12. s

“Medora” is showing at Baxter Avenue Theatres on Sunday at 8 p.m., followed by a Q&A session with some of the film’s subjects. Go to medorafilm.com for more info.