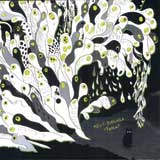 It’s hard to listen to Melt-Banana without feeling like you need an inhaler. That they defy easy classification is best exemplified by my coworker, who notes they sound like Motley Crüe sped up — as satisfying an explanation of their sound as any other. Spastic and breakneck, Melt-Banana mix blast beats, muscular bass lines and noise guitar with Japanese pop sensibilities to create what I can only term “thrash pop,” a paradoxical distinction if there ever was one. What really makes their 10th album, Fetch, magic is how seamlessly Melt-Banana moves between conventions, from groove-oriented to pop to aggressive punk squalor, without missing a beat. Perfectly illustrating this phenomenon is “Schemes of the Tails,” which, as one of the longer tracks on the album, moves adeptly between the hyperactive, saccharine pop to seizure-inducing laser noises.