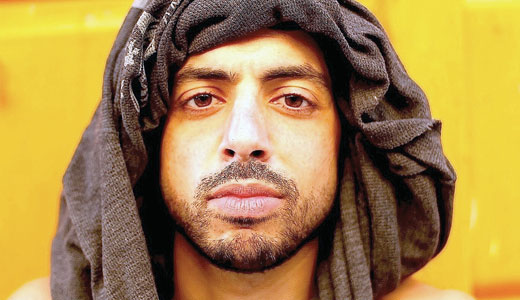 When I tell you you need to see America’s hottest up-and-coming Lebanese-Palestinian-Syrian-Italian-American comedian, would you believe me? Because that’s exactly who Sammy Obeid is, and he’s making his Louisville debut this week at The Bard’s Town. Hailing from Oakland, Calif., Obeid has been featured on “The Coexist Comedy Tour,” “Axis of Evil: The New Generation” and NBC’s “America’s Got Talent.”

But more impressively, since December of 2010, he’s been doing “1,001 Nights of Comedy,” where he performed every night for — you guessed it — 1,001 consecutive nights. He wrapped the project on Sept. 21. With no rest for the weary, he’s still on stage most nights, slinging jokes and making audiences laugh across the country.

LEO: Congratulations on finishing “1,001 Nights of Comedy.” Surely at some point, you had to wonder if it was a good idea.
SO: Yeah, I questioned it a lot. There were a lot of nights where it was hard, but it wasn’t until the end that it got really, really tough.

LEO: I imagine that much stage time must have reaped a lot of good material.
SO: I definitely grew as a comic and gained more of a mastery of the art form.

LEO:What was the “America’s Got Talent” experience like?
SO: It was grueling. It was really hard having to stay true to your comedy while still trying to appeal to other people. And they make you get up really early in the morning just to stand around in these rooms all day (before shooting). It was tough on me, but I learned so much from it.

LEO: They’re supposed to be bringing back “Last Comic Standing” … again. Does stand-up work in a reality show format?
SO: It can work. I don’t think it really works great. A lot of people watched that show; some people had careers launched off that show, some people got other things out of it. It could be done better, sure — but it’s fine.

LEO: What’s your worst gig ever?
SO: There was a time I did a set in the middle of a karaoke session at an Irish bar, and a guy in the crowd came up and punched me in the stomach.

LEO: Did your Lebanese-Palestinian-Syrian-Italian-American background affect your comedy?
SO: Because I’m mixed, I never really fell into any specific racial category, so I’m kind of an impartial voice. Since I’m not closely related to a certain race, people will kind of let me make fun of any race. So it has certainly influenced what I can get away with on stage.

LEO: So what does a Lebanese-Palestinian-Syrian-Italian-American Thanksgiving look like?
SO: Uhh … well, we would celebrate pretty normal with my grandparents. We’d have turkey, but the stuffing would be a little more Middle Eastern-flavored. But my parents are essentially hippies, so over the years they have protested Thanksgiving, as well. A couple of years ago, I came downstairs, like, “Hey, what are we doing for Thanksgiving?” And my mom was, like, “Do you mean ‘Indigenous Peoples’ Day’?” You never really know what to expect with my parents.