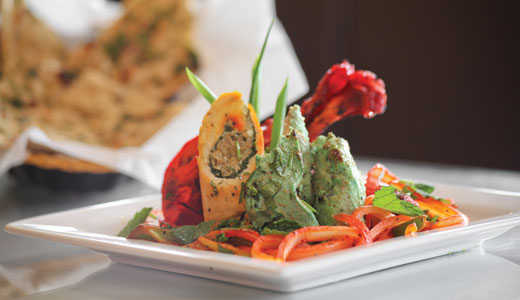 Ponder this: An Indian cooking technique based on clay pot principles as old as civilization can generate temperatures up to a roaring 900 degrees F. That’s hot enough to put even your neighborhood pizza oven to shame, and it’s even hotter than your home oven gets when it’s self-cleaning at full-blast and locked up for your protection. Happily, you can sample food kissed with primal fire in the cylindrical clay oven called tandoor (“Tahn-DUR”) at quite a few local Indian restaurants.

I’d suggest a trip to Clay Oven Indian Restaurant in Middletown, which takes its name from the iconic oven. You can’t see its smallish tandoor from the dining area, but management assured me in a follow-up phone call that they have a smallish one back in the kitchen.

I can testify that they know how to use it: The other day we ventured out to Middletown, where Clay Oven sits in a sizable storefront space just a door or two west of Kroger, and enjoyed an Indian meal about as good as any I’ve had in Louisville.

What’s more, this was the $8.99-per-adult lunch buffet. Allow me a word about that: In general, all-you-can-eat buffets pretty much jumped the shark in the 1970s (for American food) and in the ’90s (for Asian buffets). Buffet service? Ick! Buffets make corner-cutting easy, and nobody is impressed by buffet pans loaded with tired, congealed and picked-over fare.

But show me a restaurant that handles its buffet with competence and pride, keeping a good variety of pans fresh, hot and tidy, running in hot food frequently and keeping an eye on things, and I am so there, ready to tie on my bib and hunker down for a lavish lunch … and, very likely, to go back for dinner, which I hope to do at Clay Oven very soon.

Yes, this is a very good Indian restaurant, joining my current favorites Bombay Palace and DakShin (and, on good days, Taj Palace and Little India Café) as tops in town for Indian fare. The venue is attractive and comfortable, with charming large murals of Indian scenes completely covering the walls, and the food pops with bright and varied flavors.

That is the key to Indian food for me: At its best, the food of the subcontinent, from Kashmir all the way down to Kerala, shows a range of aromatic scents and flavors as diverse and as appealing as the instruments of the orchestra. Fine Indian cooking showcases this diversity in swirling but always distinguishable flavors that make your taste buds sing.

The other big advantage to buffet service is that you can try a good variety. Clay Oven offers about a dozen main-dish items, about equally divided between meatful and vegetarian, plus soup, salad and desserts. This is a great advantage if you want to fill your plate with a lot of things to try but can’t manage 10 separate entrees.

I think we managed to try it all, and liked it all, with particular props, in the order encountered, to the tomato soup (a clear soup with no cream but based on an intense tomato broth I’d rate as equal to some of the best-made meat stocks I’ve tried); the cabbage-carrot masala, with its bite-size chunks of crisp-tender cabbage and hot, not fiery seasoning that kicked the flavor about halfway up the slopes of Mount Everest; the garlic chicken, which lived up to its name with rich garlic flavor; the goat curry, akin to lamb in its gentle gaminess; and the naan bread, puffy and soft, warm wheat flatbread right out of the tandoor. (Curiously, the tandoori chicken, despite its connection to the namesake oven, was mild and plain, good but hardly memorable.)

Salt lassis ($2.95), the Indian yogurt drink, were creamy and rich and made an excellent antidote to Indian fire.

The dinner menu bills its fare as “aromas of the Himalayas,” suggesting a northern Indian perspective, and Saturdays offer a Nepali lunch buffet I really need to check out. The dinner menu appears pretty much pan-Indian, though, with apps, soups, salads, an array of Indian breads and about 50 entrees that mostly range from $10 to $15. After a brief delay awaiting regulators, beer and wine service is now available.

Our toll for two lunch buffets with the lassis was an affordable $25.32, and even with buffet service, a $5 tip felt right for friendly and attentive table service for drinks, bussing and knowledgeable responses to food questions.