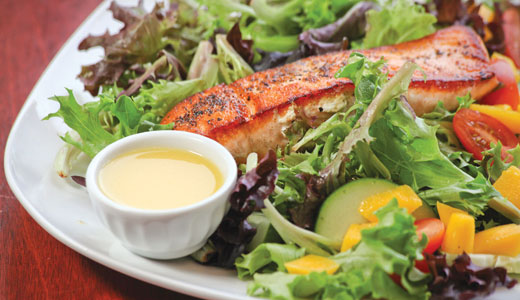 My friend Tom has been in Louisville for a few months now, and he knows his way around pretty well. But he got a little confused when we got together for lunch the other day at Cheddar Box Too.

Tom said his GPS wasn’t offering much help, but when he wheeled into the Chenoweth Square shopping center from the east, rolled past Majid’s and Paul’s and then spotted my car parked right under a sign that read “Cheddar Box,” he figured he was there.

Not quite, Tom. But close.

As the patient staff at the original Cheddar Box deli and specialty-food shop, which has been on the site since 1979, have become accustomed to explaining, Cheddar Box Too — its long-awaited sit-down eatery sibling — is right over there on the other side of the parking lot.

The original Cheddar Box has earned a well-deserved popularity for the homemade soups, sandwiches and delectable desserts it has provided, boxed and ready to go, over the counter for the past 30 years and more. But if you want to eat at Cheddar Box, your options are pretty much to open the box and dine standing up, or to grab a chair at one of the patio tables sitting out front and rip open your box right there.

Just about one year ago, owner Nancy Tarrant and her crew finally succumbed to what must have been thousands of requests and launched Cheddar Box Too, serving breakfast all day and lunch at midday. (It’s open daily from early breakfast through mid-afternoon, but never for dinner.)

They did a beautiful job of renovating the free-standing building that had housed Diggs garden shop for many years (and even further back, if memory serves, the original home of the St. Matthews Paul’s market). It’s bright and sunny now, done up in yellow and white and lots of windows to let in the light.

I think every seat at every table has pretty much been filled ever since opening day, loaded with happy campers noshing on a somewhat truncated selection of the soups and sandwiches that Cheddar Box made its own.

That “truncated” bit can be mildly frustrating at times if you want a Cheddar Box favorite that’s not on the menu; this can be particularly troubling if you’re craving a specific dessert, as Cheddar Box Too usually offers only one choice of dessert daily — take it or leave it. I expect it’s wise of management to stick with a relatively limited menu for table service in a small, busy eatery, though, where efficient service is key.

That’s not to say the menu is too short for comfort, though. It features about 10 breakfast items, plus sides, and about 15 lunch sandwiches, soups and salads. The only items on the menu above $10 are the pan-seared salmon salad ($12) and the half-pound burger on toasted brioche bun, which is $10.50, or $12 if you add pimento cheese, which sounds like a nice thing to add.

The menu appears designed for omnivores, with few options for the plant-eaters and nothing I could see, other than maybe oatmeal-hold-the-milk, that would pass animal-free muster with newly minted vegan Al Gore and his cohort.

I’ve been in for breakfast dishes before and was extremely happy with the omelets ($8.50 for a three-egg model, plus $1.50 for your choice of each filling ingredient); the classic eggs Benedict with country ham ($9) also wins praise.

We checked out the lunch side to discover with some incredulity that one of Cheddar Box’s most famous sandwiches, the Benedictine BLT, is available in a box from the take-out shop but not on your plate at Cheddar Box Too.

No BBLT is NBD, though, as there’s plenty more to tickle your taste buds. The pan-seared salmon salad ($12) made a stylish bistro meal. A hefty block of salmon, cooked through but still tender and juicy, perched atop a fresh, carefully made salad of mesclun lettuces and an intriguing mix of veggies and fruit, tomatoes and cukes and mango dice, in a sweet-tart mango vinaigrette.

The Garden Press sandwich ($8.50) packed a lot of flavor in its veggie smorgasbord of wilted fresh spinach, mushrooms, onions, melted cheese and pesto mayo on grilled white bread. The cheese seemed more like mozzarella than the advertised Gruyere, though. Its melty stringiness was fun but made it a real mess to eat as long strands hung from sandwich to mouth to plate.

The dessert of the day was a classic pumpkin cake ($3.75), rich brown and spicy, with a seductively sweet and creamy icing.

Service was gracious and mostly professional, but perhaps a bit over-eager. Pro tip: When it appears your guests are engaged in a serious conversation, repeatedly breaking in while people are talking to inquire as to how they’re enjoying the meal isn’t really the best thing to do.

With glasses of strong, tart iced tea flavored with orange juice, the only iced tea option and apparently the way Cheddar Box Too does tea, lunch for two came to $28.89.