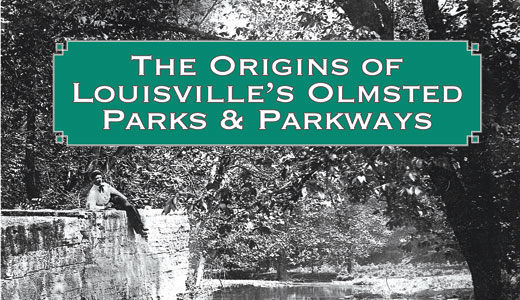 In my hometown, far north of Kentucky, there is an Olmsted park along the lake. I remember it as a point of pride, having an Olmsted, the landscape architect of New York’s Central Park fame. It’s like admiring stained glass and then being informed it is a Tiffany window. Brings it up a notch.

Of course, as an adult — especially as an adult living in Louisville — I’ve come to realize there are many parks attributed to Olmsted. And through “The Origins of Louisville’s Olmsted Parks & Parkways,” I’ve learned that Frederick Law Olmsted’s name has been blanketed on projects that … well, let’s just say, other forward-thinking individuals were doing projects in the 1800s and somehow Olmsted got the lion’s share of the credit.

This juicy bit of gossip is far from the sole nugget of knowledge in the book. The pages are jammed with landscape plans, period photographs, discussions of how boulevards were designed to connect green spaces, and the changing trends in outdoor activities — from carriage rides to strolls, games of cricket to baseball leagues.

You could read “The Origins of Louisville’s Olmsted Parks & Parkways” straight through, though the temptation to flip to each section that calls out your neighborhood, interest or background is fierce. Admittedly, I found the urge too strong to resist. And although each section is presented in chronological order, history has a way of folding in on itself. A reader can peruse the chapter on baseball clubs in 1874, then flip back to estates and pleasure gardens of the 1850s, taking in quotes from papers of the day and historical facts along the way. In fact, the coffee-table design of the hardback lends itself to being picked up for attention-grabbing bits of Louisville lore whenever the mood strikes.

Samuel W. Thomas, Ph.D., a researcher, lecturer, author and expert on Louisville, wrote “The Origins of Louisville’s Olmsted Parks & Parkways.” With more than 40 years of research on the subject, along with having served as the first director of the Historic Locust Grove, a Jefferson County archivist and head of The Courier-Journal’s book publishing department, it is difficult to imagine anyone else with the same breadth of knowledge.

Thomas passed away a year before his book was completed. Thankfully, Holland Brown Books brought the manuscript to fruition. “When I learned that before he died last year Sam had nearly completed a years-long effort to produce a book about the origins of the Louisville park system, I knew I wanted to help,” says publisher Gill Holland.

History buffs, Louisville aficionados and lovers of antique imagery will all enjoy “The Origins of Louisville’s Olmsted Parks & Parkways.” It is an ideal book for anyone with a connection to our city and is available at Carmichael’s, A Reader’s Corner or hollandbrownbooks.com. I may even gift a few copies to childhood mates in Milwaukee. You know, just to prove Louisville has more Olmsteds.